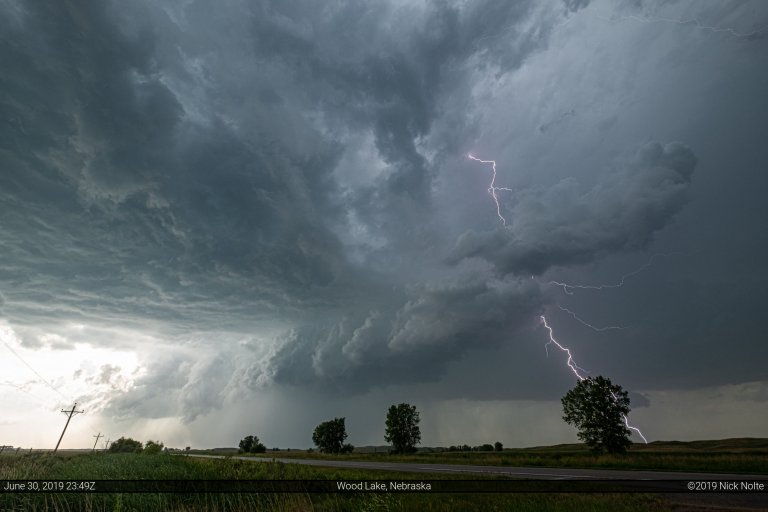 June 30th was a combination chase/travel day, so the plan was to chase storms along a frontal boundary in Central Nebraska, follow them east, then hopefully be close to home after dark. The forecast was for a surface low in northeast Colorado to drift into southwestern Nebraska. Extending from that low was a warm front to Sioux Falls.

My plan was to find that boundary and play it where the atmosphere seemed the most primed. The SPC had a large slight risk that extended from southeast Montana through northern Nebraska and South Dakota into Minnesota but they did not delineate any tornado risk in the Nebraska portion, but I decided to chase there anyway.

I had driven quite a ways the previous night in search of a hotel and ended up in Watertown. I was debating whether or not just to head home instead of chase, but I decided to see what would develop. Figured I’d regret it if I went home only to see supercell explode where I would have been. It looked to me like heading to Valentine was probably a decent start, then you’d have a pretty good road network to readjust, if necessary.

I left Watertown just before 16z and drove down to highway 44 which I took across South Dakota to US 83 arriving in Valentine at 21z. Unfortunately, as I was arriving in Valentine, a couple of cells blew up near Lake Andes where I’d just driven through two hours earlier. These storms went tornado warned at 2130z and there were a couple of tornado reports and some photos of a nice tornado near Lucas.

To my southwest a couple of cells started to develop along the frontal boundary near Hyannis. Temperatures south of the front were almost 100 so I figured high bases. As I approached Thedford a cell started to go up southeast of Valentine! I decided to head back north as lower temperatures would help out with storm bases.

The cell was developing rather quickly and the anvil spreading downstream. The storm also underwent a split and we had some right turn movement on the right split.

I finally got on the storm near Wood Lake and while it looks pretty cool there wasn’t much for low level organization. The northern cell started to organize rather quickly and the hail core really amplified. I was sitting between the two cells to keep an eye on both.

Eventually the two cells started to congeal into a large mess as they moved off to the northeast and it appeared the cap had started to fill in so I decided to call the chase and begin the trek back to Grand Island.