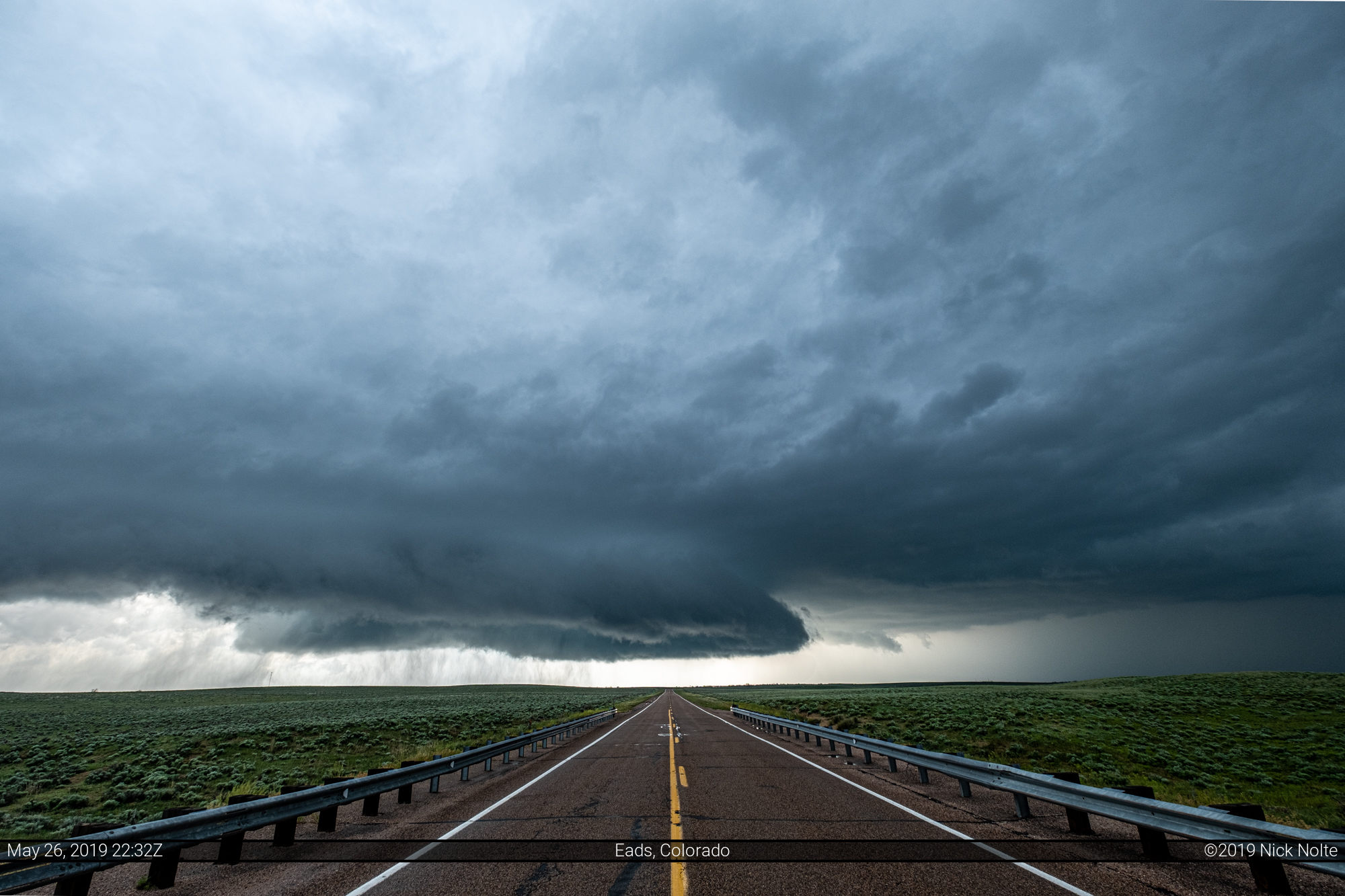 SPC had outlined a 15% hatched risk for tornadoes across Western Kansas. The atmosphere was expected to be primed with large CAPE into Eastern Colorado east of a dryline with very favorable deep layer shear meant the potential for supercells was evident, just storm mode was the question.

We left Garden City, KS at 16z and began the trek west along US 50 to Lamar where we stopped to have lunch and met up with a couple other chasers. A mesoscale discussion was issued for the area just after 17z indicating a quasi-warm front would lift north throughout the day as the surface low migrated northeast as well.

A couple of cells had begun to develop to our southwest in Las Animas County and we wondered if those would be the storms we should go after. We watched as they approached Lamar, but ultimately let them go as they did not look like they were strengthening on radar. Meanwhile, shortly before 19z a rather significant storm started to develop in Baca County south of where we were. We drove south on US 287 towards Springfield then went east on highway 116 towards Two Buttes to get in position to intercept the storm.

While some large hail reports were coming in from the storm, it didn’t look that great in person and as it trekked off towards the northeast it fell apart and fizzled out. However, the new updrafts were forming to our north so we bailed north to try and get back in position for the newly developing storms around Lamar.

As we approached Lamar, a couple of tornado reports came in near Wiley and photos that surfaced later on social media indicated a brief tornado there. That storm appeared to be weakening as it pulled off to the north so we decided to target the next storm in line east of Las Animas. We drove west of Lamar to wait for it to come to us.

That storm went tornado warned south of Eads as we tracked it north along US 287.

As the storm moved northeast we had a decision to make. Wait and follow behind it until it moved north of highway 96 or cut through the hook and get in front of it before it crosses 96.

We decided to slice the storm to get in front of it since we had a clear visual beneath the meso. Making this decision gave us some of the best visuals of the day when we stopped just west of Chivington.

An awesome view of the mesocyclone where the rear-flank downdraft was carving a dry slot causing a shelf cloud to form on the edges with streaks of rain falling beneath. As a bonus, since we sliced the hook to get in front no other chasers were on the road with us allowing me to step into the center of the highway to snag these shots.

As the storm continued northeast we continued towards Sheridan Lake planning to turn north on US 385 to keep up with the storm. It went tornado warned again while we were catching up to it. We got back on it at Cheyenne Wells and it still had a nice base on it with a bowl lowering towards the northern edge.

We continued to track the storm to Burlington where we decided to call the chase as the storms appeared to weaken and began to congeal into a large mess. All in all, a pretty good chase even though we missed the brief tornado near Lamar.