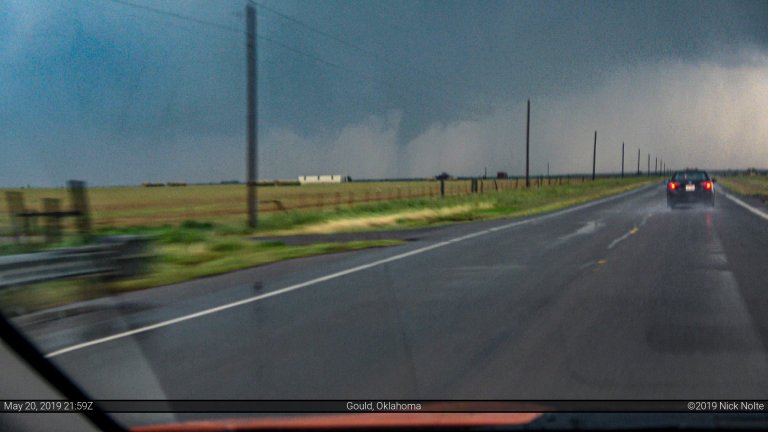 After a down day on the 19th that we used to travel from Oklahoma City to Amarillo, we awoke on the western fringes of what was forecast to be an extremely volatile day in the Eastern Panhandle of Texas into Western Oklahoma.

The Storm Prediction Center had issued a high risk with anticipation of a tornado outbreak including some long-track and violent tornadoes along a corridor from Amarillo to Oklahoma City.

At 16z I had analyzed a surface low in eastern New Mexico with a warm front stretched eastward through Dallas into the Arklatex while a dryline was setup from the low down towards Del Rio in southwestern Texas. While the low and dryline was expected to drift eastward to the Eastern Texas Panhandle the warm front was expected to lift northward into Oklahoma. Considerable cloud cover across Oklahoma left in question how far north the front would progress we felt pretty confident the corridor of primary action would be between I-40 and US 287 east of Clarendon, TX into Southwest Oklahoma.

Heavy overnight rains provided some flooded streets to navigate in order to get out of Amarillo. Eventually Jon, Brad and us made it to I-40 and began to head east around 14z. We decided Wellington, TX would make a good staging area and headed in that direction and arrived there shortly before 16z expecting the show to begin in early afternoon. We pulled into a gas station parking lot on the east side of town and sat. Shortly after our arrival, other chasers began to trickle in and within an hour a mighty congregation of chasers had descended on the station filling the parking lot.

Shortly after we arrived, the SPC issued the first mesoscale discussion of the day for our area indicating that a tornado watch was imminent for a rapidly destabilizing airmass conducive for supercells with an increasing risk for violent, long-track tornadoes.

Cumulus had begun to bubble to our west and it didn’t take too long for a storm to erupt and explode in the environment. By 19z we had a full fledged supercell underway to our southwest near Roaring Springs.

Many chasers had already left the gas station while we were holding back waiting for the storms to head our way, but eventually we decided to blast south as well to head towards the Roaring Springs storm.

We stopped at the intersection of US 83 and US 62 west of Hollis to evaluate the situation as a new storm went up to the east of the one we were originally heading towards. We became concerned that trying to intercept that southeast of Childress may become an issue once it crosses the Red River into Oklahoma.

Jon and Brad decided to hang back while my Mother and I decided to continue south towards Childress. We passed through Childress and turned southeast towards Quanah hoping to intercept the storm along the highway and perhaps follow it north back into Oklahoma.

We finally got a visual on the storm southeast of Childress, but holy crap was it hazy. This would prove to foreshadow the rest of the day as structure visibility turned out to be nearly impossible if you weren’t directly under the storm.

We stopped on US 287 southeast of Childress to watch as the storm crossed the highway. There, it exhibited some nice motion and a decent wall cloud and some strong lightning.

In retrospect, we probably hung out here too long because now the storm was north of us and we had to catch up to it again as it crossed into Oklahoma. Not sure of bridge crossings over the river between Childress and Quanah I decided to bolt back to Childress and go north and hit US 62 and catch the storm from behind.

As the storm approached Gould, the velocity signatures started to show more of a rotational couplet.

As we pulled up on the backside of the storm we were able to see the tornado in progress.

The tornado didn’t last long and now we were in a long convoy of other vehicles traveling at a less than optimal speed while we were trying to catch back up to the storm.

The storm then really ramped up as it made a beeline towards Mangum. While still trying to catch up I thought I saw a tornado on the ground in the distance but I wasn’t sure. Nevertheless, I pointed my trusty camcorder in the general direction and was able to verify later that we did, indeed, see the Mangum tornado.

We followed the storm — and the huge convoy of vehicles — into Mangum and had to turn around where the tornado crossed the road on the north side of town. The storm was well ahead of us now and a congealed line was trailing it.

The large chaser presence made travel slow in the wake of the storm that made catching up to it impossible so we decided to make way for Wichita to get in position for the following day!