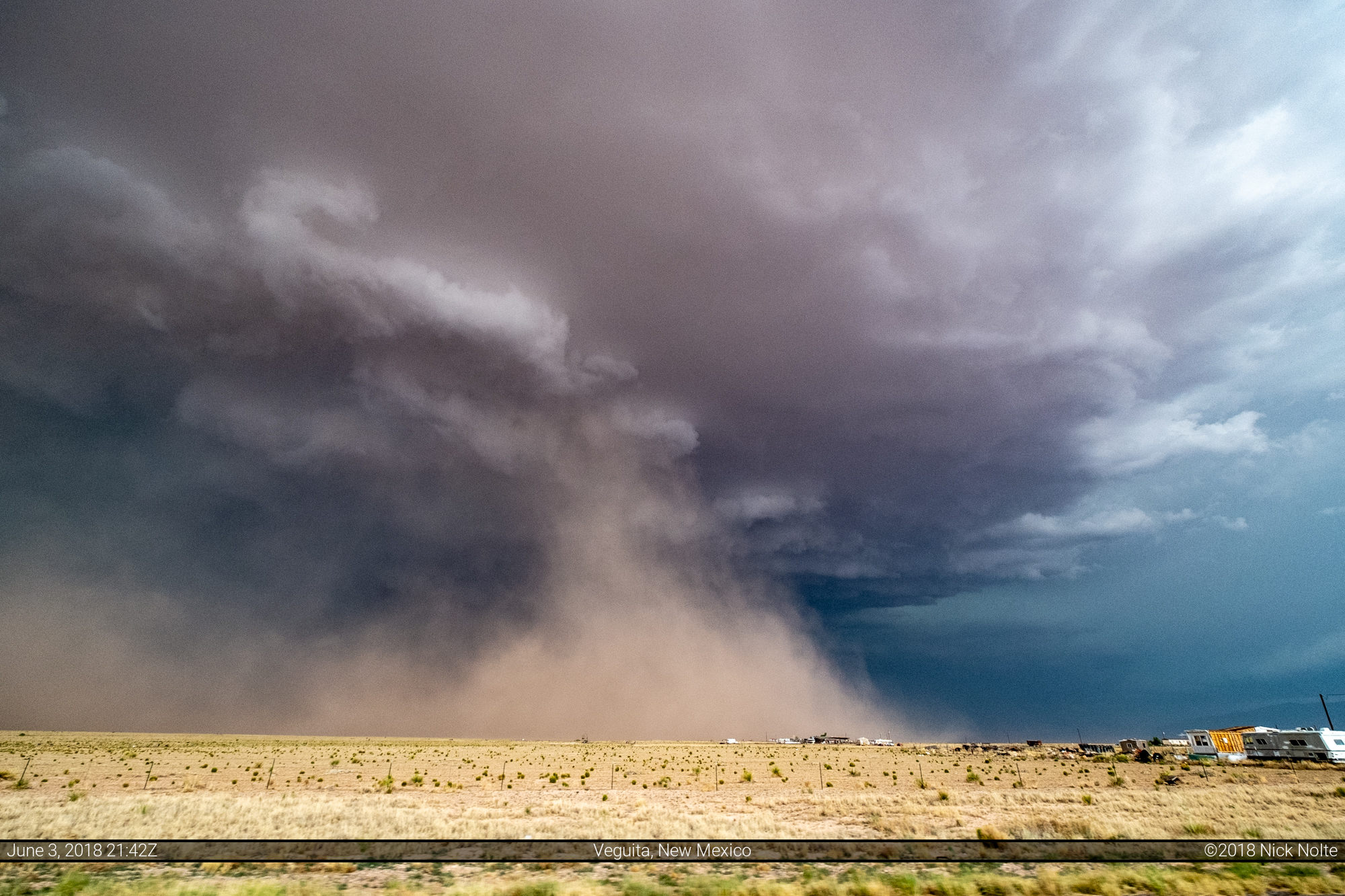 After a brief local chase in Northern Nebraska on the 1st, I used the 2nd as a travel day to trek westward with my sights set on chasing central New Mexico on the 3rd. It had almost been four years to the day since my last visit to New Mexico that netted me a brief tornado near Clovis. This time, however, I would be venturing much further into the state than ever before on a chase. Albuquerque was my choice to stage for the day as it was the best option for road networks should I need to reposition in any direction.

I left Grand Island on the 2nd and made my way to Las Animas, Colorado for the night. I arrived in Albuquerque around 19z as storms were beginning to fire over the higher terrain to the west. SPC had issued a slight risk for most of Central NM which included a 2% area for tornadoes.

I continued west on Interstate 40 out of Albuquerque to intercept the storm to the west which had just gone tornado warned. As I rolled up on the storm a flat rain free base with a slight RFD cut presented itself, but no distinct lowerings at the time.

I drifted a little west along an old alignment of US 66 which had become quite a rough road that seemed to have been given back to Mother Nature. Rife with large holes in the dirt, I wasn’t able to drive too fast so I didn’t venture very far in case I had to backtrack for an escape. The storm had begun to take on a nicer supercellular structure to the clouds, but the base remained mostly featureless.

I bailed back east and decided I was going to head south once I got back to I-25 to head towards the tail end of the line of storms that was now fully developed. I stopped near the municipal airport just west of Belen to get some shots of the storm as it approached town with some mountains in the background.

A few miles down Old US 85 from Belen I ran into a couple of gustnadoes which appeared to have spun up along the rear flank downdraft of the storm. I had spotted a small one in a field to my right and as I drove closer to get some video, I missed the completely larger one behind it.

I stopped to get out and film this crossing the road behind me, but I had a hell of a time getting the driver’s side door open. Well, turns out there was some strong inflow into a larger gustnado just behind this one that I didn’t see. Once I finally got the door open and popped my head out I saw the much larger gustnado just off to my right and it was coming right towards me so I jumped back into the car.

After that fun little encounter I continued east along US 60 and the storm became a major dust producer as the forward flank was picking up whatever loose soil it could.

Shortly before 23z, I stopped along highway 42 southeast of willard to shoot the storm as it approached a mesa with wind turbines on top. The storm appeared to have a rather low wall cloud with a nice inflow tail and what appeared to be a suspicious lowering right where you’d expect a tornado to form.

A tornado warning was issued at this time as the storm was showing some pretty good rotational velocities on radar.

This ended up being a confirmed tornado by the Albuquerque NWS office. I continued southeast on highway 42 towards Corona where I stopped to take some shots as the storm rolled off the hills again. A tornado was reported on spotter network around this time, but was not verified by the NWS.

I then continued southeast to find a cool spot to stop off and shoot a long video of the storm as it approached to finish up the chase.

You can find the time lapse version of the above shot in the last half of the video posted below!