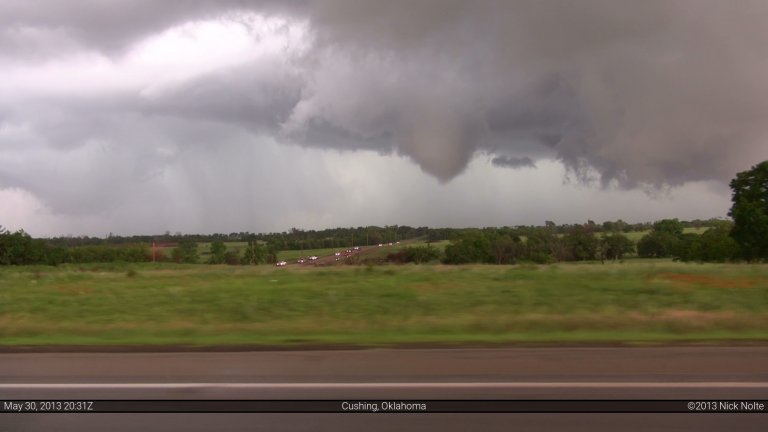 A negatively tilted trough continued it’s eastward march and while it’s strongest winds were displaced to the northeast from the target area, convective outflow from the previous night’s storms and an eastward mixing dryline would help foster convective development across Oklahoma. The trick would be our upper support would be moving out of the area and heights would be rising. Would the instability be able to overcome this? SPC seemed to think the possibility was there and it warranted a 10% hatched moderate tornado risk for the day.

The night before, we had expected our target area to be further north, around Woodward or so. The shift to the south and east during morning analysis had us scrambling to get out of Dodge City quicker than we anticipated. We eventually left around 10:30 and began to blast east towards Wichita. During our trek there, a mesoscale discussion was issued for NE OK, SW MO and NW AR for a likely tornado watch. A little bit later, an additional discussion was issued for our target area including most of central Oklahoma indicating strong tornadoes may be possible.

Just as we rolled into Wichita, the SPC issued a tornado watch for Central Oklahoma. A line of storms was strengthening on the southern fringe of the persistent MCS from the night before in northern Oklahoma. When we crossed into Oklahoma shortly before 2pm, there were a couple of cells firing on the tail end of the line. Those were our new targets and we continued to make our way to them.

I split off from Skip and Jenn after exiting the 412 to head south towards Stillwater, while they continued east along the turnpike. They were headed to get a view of the tornado warned storm near Pawnee, while I decided to drop south to the storm heading towards Perkins. Eventually I caught up to the storm north of Perkins where it had a nice hook on radar and was exhibiting rotation on SRV as well as presenting a decent looking wall cloud. 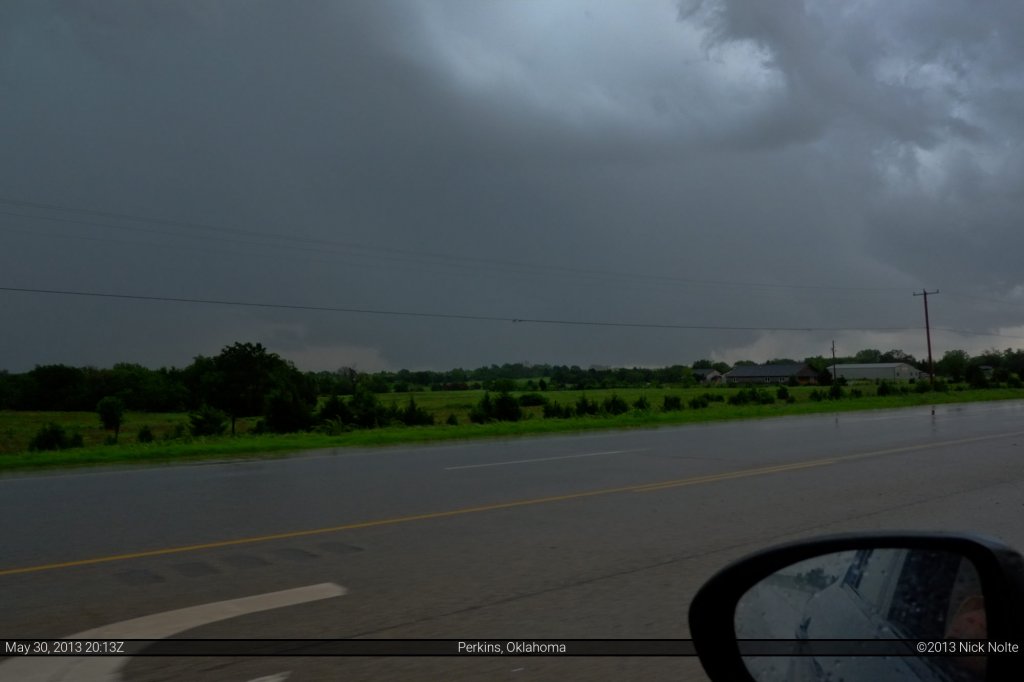 I continued to follow the storm along OK-33. RFD cut through the base a couple of times as the storm kept cycling, each time the lowering tightened up and a funnel developed. About five miles west of Cushing, what shows up in the second half of the video as a funnel was reported as a tornado on the ground by a few chasers closer to the ground circulation than I was. 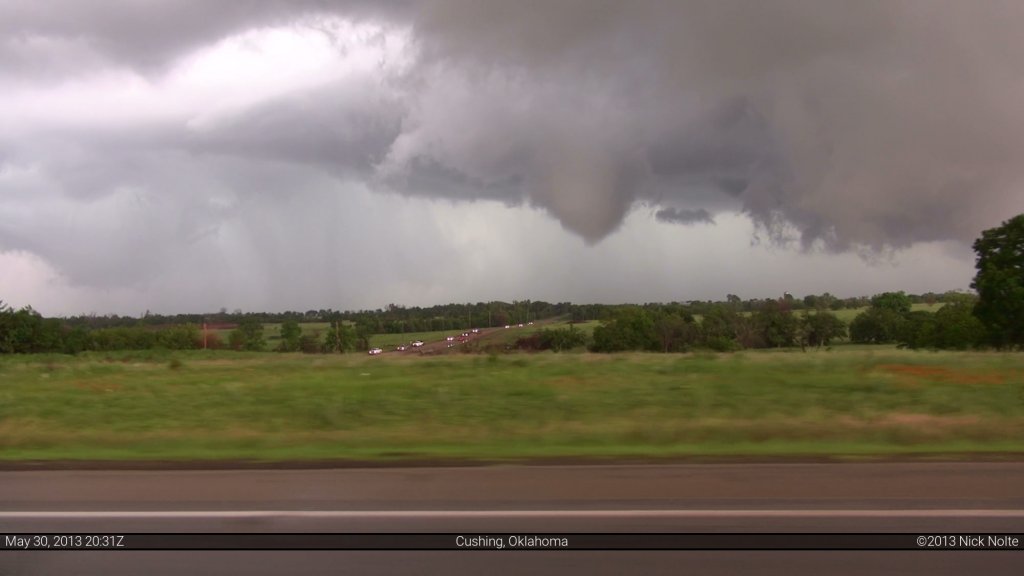 It was during this time the forward flank of the rear storm started to interfere with my storm. This interaction, I believed, caused the spin-up near Cushing, but once it surged forward it disrupted the entire updraft region and cut the inflow off. Once that happened, the storm was essentially finished as it became an upscale growth of the cell behind it. I did keep up with it for a bit, just in case the interaction caused some increased helicity and followed it to Mannford where the storm started to gust out.

At this point I bailed south and blasted to I-44 to head southwest to the cells that were warned east of OKC metro. However, as I approached those storms they proceeded to die off one by one. At this point it just seemed to be “blast to the next cell to the south and see what happens” And, that’s what I did, one by one watching cells die, all the way to the Texas Border. As I approached a cell near Springer, it started to die out, so I continued south. As I approached the storm near Ardmore, it started to die out, so I continued south to the final storm in the line. It, of course, also started to die out, but I caught back up with Skip and Jenn on a side road west of Thackerville where we watched the last low precipitation supercell in the line fizzle into nothing, literally.

Eventually we were joined by Stephen Jones, Ben Holcomb and Jari Ylioja from Finland. There we discussed where to have dinner and eventually settled on Two Frogs in Ardmore.

So, from there we headed back to Ardmore where the anvil from one of the storms was putting on a show at sunset for us. 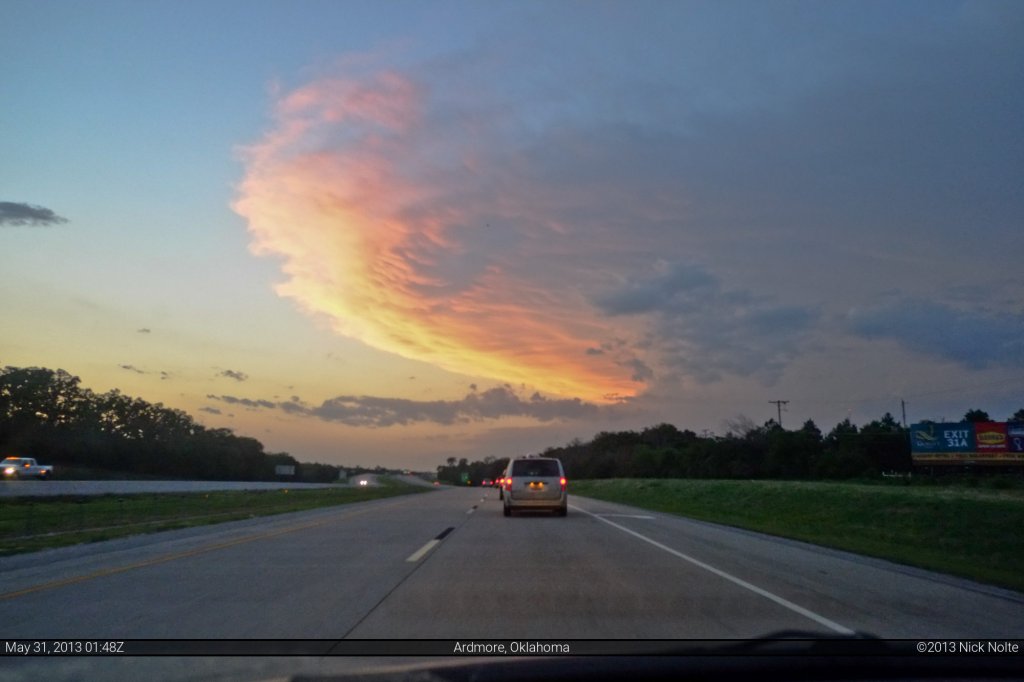 We decided to stay in Ardmore for the night which enabled us to partake in some local beverages. We met a group of chasers from the United Kingdom at dinner and shared tales from the day and past chases. Eventually we headed back to the hotel and forecasted for the following day. It looked like it was going to be a play west or southwest of Oklahoma City, so Ardmore was a good place to rest.