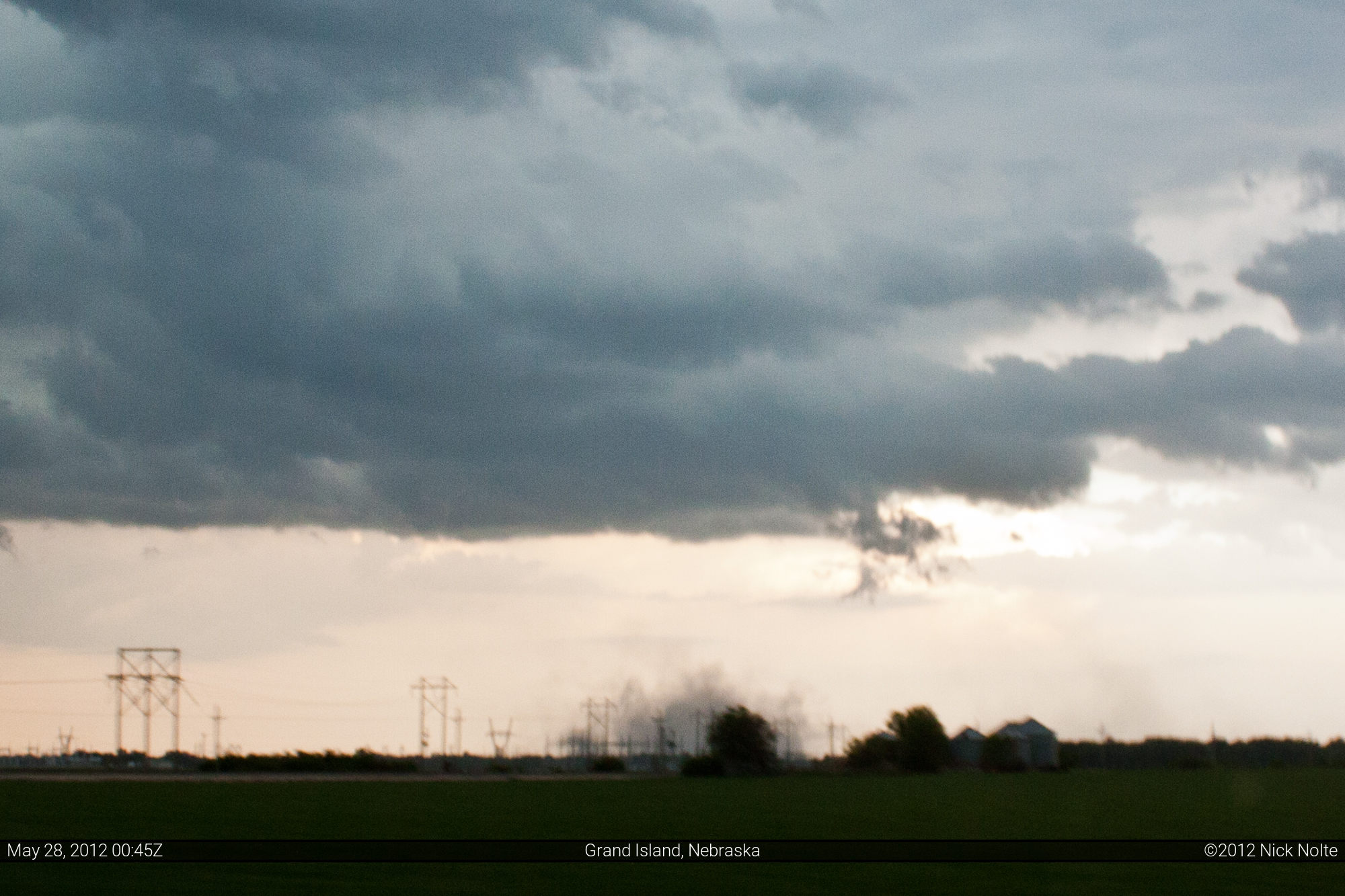 May 27th would have been a good day for a case study regarding the actions of storm chasers who sit too long in one spot. One of my weaknesses, especially in my first year or two, was not being able to just sit and monitor the situation. I always had to be moving or readjusting my target. Sometimes I’d move 30 miles just to move. Brad, Jonathan and I awoke in Grand Island, Nebraska for the start of this day. It was the first time in a while I’d woken up in the target area, and at an optimal spot. We didn’t even check out of the hotel until we were required to. So, we take off from the hotel at 12pm, then proceed to a county park north of I-80 where we sat for nearly four hours until we saw the first cumulus clouds start to take off northwest of town.

We blasted up US 281 to get on the first cell of the day, unfortunately, as we passed St. Paul, it looked like we weren’t going to be able to catch up to it. So, we pulled off on Greely Avenue, about two miles west of Wolbach to watch it float away. Luckily for us, a new cell started to form to our southwest, so we turned our attention to that one. As it approached, we watched carefully as it started to look very nicely organized. The next two shots and radar grab were within two minutes of each other and it was clear a circulation was getting organized. The second photo shows what may be a funnel starting to develop below the wall cloud.

We got back in our cars and bolted after the storm as it looked like it was going to drop a tornado any second. We passed Wolbach then turned north on W P A Rd where a couple miles up we saw the debris cloud swirling on the ground. Unfortunately, it didn’t last too long and while I was dropping an icon on Spotter Network, the thing had lifted.

We continued on, in our convoy. Brad in the lead, followed by myself and Jonathan bringing up the rear. Brad managed to find a road of death and soft sand for us to try and navigate with our small cars. In retrospect, I’m pretty pleased that we managed to pull that off without getting stuck. Nevertheless, Jon and I were relieved to get back on normal gravel, but once again our road deteriorated and we found ourselves face to face with the dreaded “Minimum Maintenance Road” sign. This time it had been raining and I didn’t feel confident traveling on a similar, but wetter, road than before, so I pulled off to the side and Jonathan did as well.

The location we stopped at was apparently a pig farm. While Jonathan was in awe of the insane cloud motions going on overhead, I was marveling at the two dead pigs draped over the side of a dumpster. “Check that out,” I said to Jon and he glanced down and we shot each other looks of bewilderment. Time to get out of here, lol. Brad radioed back that the road wasn’t as bad as the previous one, but we decided to head back down the good gravel to get to the main east-west highway.

Eventually we met back up with Brad and began our trek back towards Grand Island. Our reasoning behind this was a rogue storm southeast of all the main action had collapsed and a huge outflow boundary was rushing west and it looked to intercept the storms coming up from the south near Grand Island.

We continued past I-80 as it looked like the outflow boundary had stalled, but in fact it had just intersected the storm over Grand Island. So, while we fueled up in Hastings, we all looked back to the north at a huge wall cloud that had just formed and got back in the cars and bolted for it. Unfortunately, we had a hell of a time catching up to it and just managed to catch some gustnadoes from a distance.

Eventually, things started to line out near Osceola and we took one last look at the storm before calling it a day

After this, we all drove to Omaha where we parted ways and I continued on to Newton, Iowa for tomorrow would be a “head home / chase” day.