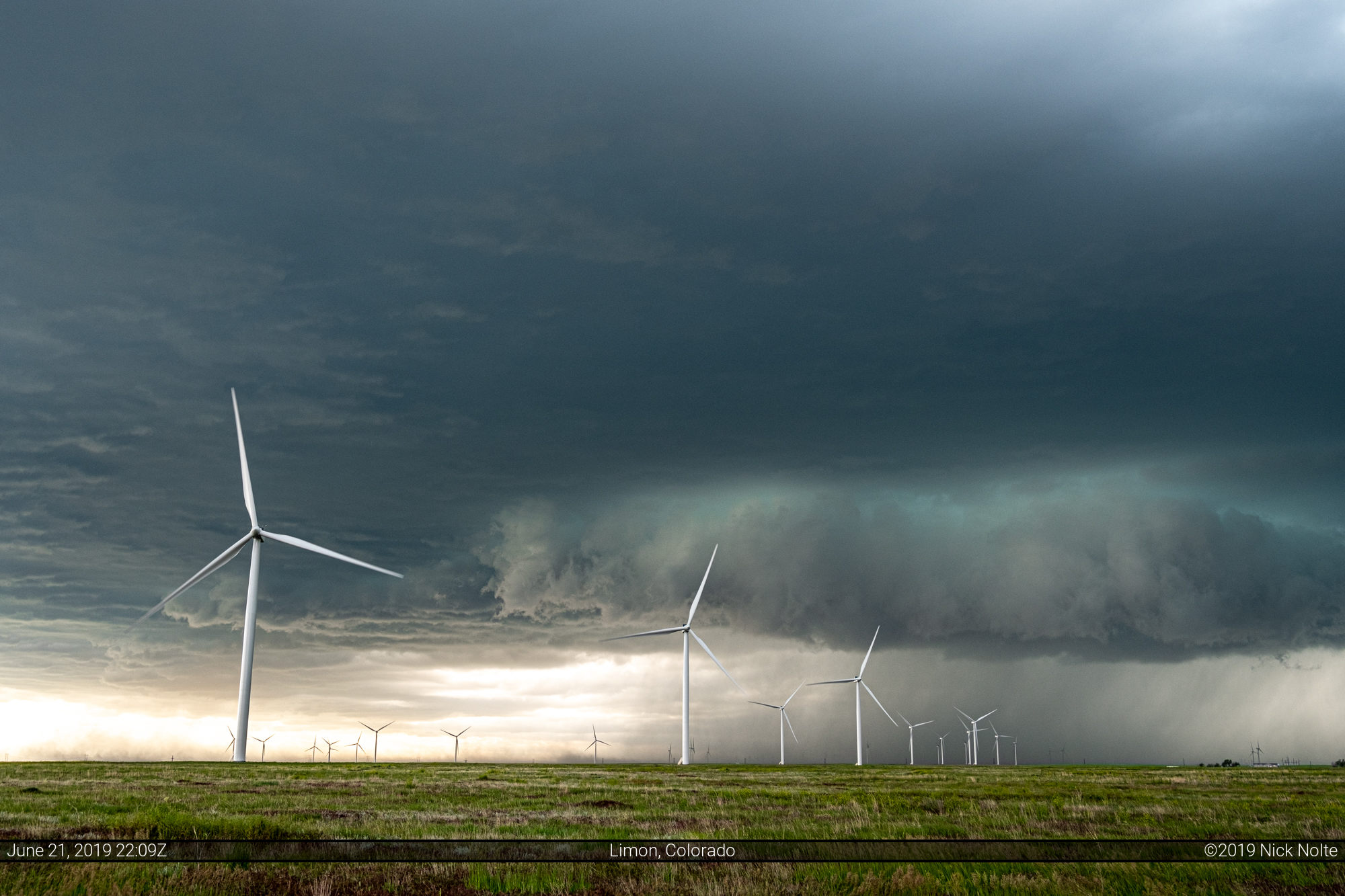 June 21st featured a couple of areas of interest across the central US for severe weather. An enhanced risk existed downstream of an MCS marching across Iowa and two other slight risk areas in North Dakota and Eastern Colorado. I’m partial to playing Colorado upslope, especially given that the following day appeared to be in Colorado as well.

A surface low was situated in Eastern Montana with a surface front extending from there to Broken Bow then curling into Colorado. In the post-frontal regime in Colorado, upslope flow was expected to develop leading to supercellular development in the higher terrain and along the Palmer Divide. I decided this could be an interesting play so I left Grand Island just after 12z and headed west.

I arrived in Limon just before 19z as cumulus was developing over the mountains. An hour prior the SPC issued a mesoscale discussion for the area indicating continued easterly upslope flow was transporting moisture into the target area. While dewpoints near Denver metro were generally in the low 40s, Springfield and Lamar were at 60. The SPC then issued one of the smallest severe thunderstorm watch boxes I’d seen in a while.

Shortly after my arrival in Limon, storms started to go up along the I-25 corridor south of Denver metro. I decided to head west on highway 86 towards Elizabeth. Figured might as well get on them as they get started.

I bailed south at Elizabeth when the southern storm formed and exploded, and eventually I intercepted it just before 21z and it had a gnarly looking lowering with shelf cloud.

I was able to sit and watch this barrel towards me for a few minutes before it appeared that a move to the south would be prudent. What was interesting is as I bailed back east a bit then south the storm formed an appendage that surged south along with me and I could not get out of the hail and wind in the RFD with the road network I was on. I had to just keep going and try and get in front of it.

It took about fifteen minutes but I finally got out in front of the storm again. about 6 miles east of Elbert. I beat the storm back to highway 86 east of Kiowa and was able to blast east and keep ahead of it. I dropped south towards Simla as the storm had turned right and was now heading almost due east. Eventually I got enough distance from it west of Hugo to stop and check it out again.

At this point the storm was tracking towards Hugo so I just kept up with it to see if it was going to do anything. It exhibited a nice wall cloud at times, but I think lack of low level flow was keeping the storm from organizing at the low levels.

As the storm tracked east it started to weaken on radar and by 0z it had completely fizzled out. So I continued east towards Kit Carson. While I was doing that it looked like new storms were trying to form near Eads, and a larger storm was strengthening east of Last Chance.

Since I was a good hour from the north storm I decided to see if the new stuff that was popping nearby would amount to anything. However the storms were more than just blips on the radar, although they did look pretty cool in person.

What was left of these storms was kicking up dust all over the place with strong winds approaching 90mph if you chose to intercept one of the walls of dust. Which I did. It was fun.

Kinda looks like a tornado. Almost. These storms were really cranking out the wind, yet they were barely there on radar, just a few random showers.

As it was starting to get dark, I decided it was time to head north and get back to US 40 and begin the trek to the hotel. Unfortunately I picked one of the muddiest roads in eastern Colorado just after a storm passed over it dumping a couple inches of hail. It was slow going, to say the least, but I made it eventually.

Once I got back to US 40 west of Sharon Springs I got to drive through some of the hail the storm had dumped. It was a few inches deep in some spots on the highway and it was slow going as we headed east. Eventually I called it a chase and went to Goodland for the night.