Going to consolidate these two days into one log since not much happened between them. In fact, I have no photos or video from either day. I really wasn’t expecting the two days to be complete duds, as there was a pretty decent H5 trough on the 9th that transitioned to a closed low on the 10th. However, a strong cold front was crashing across the nation and a quasi-stationary front was draped across the Midwest.

My plan was to play the triple point area where the cold front met the stationary front and hoped something would release off the cold front and ride the boundary. So, I awoke in Goodland, Kansas and opened the door to my hotel to load up my car and I was greeted with a freezing blast of arctic air! What the hell!? It was 25 degrees out and my car was coated in ICE! Well, this was a first. I’d never started a chase day with my car coated in ice. So, I started the car and let it warm up while I gathered my things.

I figured I was going to need to get across Kansas, maybe even into Missouri before I had a chance at catching anything in front of this strong cold front. So, I departed Goodland and began the trek east on I-70. The stretch to Oakley was a bit tricky as freezing rain kept coating the windshield. Once I got past Oakley, the temperature finally rose above freezing and things started to thaw out. As I approached Kansas City, I figured the only chance I would have at anything was to get in that clearing that was showing up on visible satellite across northern Missouri.

I ended up sitting near a radio tower west of Plattsburg, MO for most of the day where the Minnesota Trio of James, Rob and Nick stopped by to visit as we sat under uneventful skies. Eventually as the evening wore on it became clear nothing was going to happen, so we all headed up I-35. I stopped in Des Moines for the night while they continued home to Minneapolis. There was 134 severe reports this day, 121 of which were hail from elevated storms north of the stationary boundary and west of the cold front, where near North Platte, NE a severe thunderstorm warning had been issued during a snowstorm. 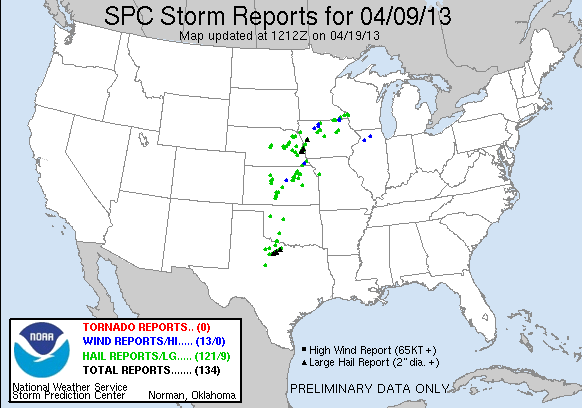 The 10th was going to be a mostly drive home day, but had the potential for deviation from that path should the conditions permit. I took off from Des Moines around 8am and began a leisurely trek east. Once I hit Davenport the uncapped environment across Illinois and Indiana presenting upwards of 2,000 J/Kg of MLCAPE proved too hard to resist and I hit I-74 and headed for Peoria, and later Indianapolis. At about 19z cells started to fire near the triple point and eventually the stationary boundary lit up across Indiana and Ohio.

Just as I crossed into Indiana, a storm went tornado warned, but I was still a bit behind it. I attempted to catch up to it, but as I did the warning would drop and the storm would start to look like a mess. I was baited onto one more tornado warning northwest of Indianapolis before I finally called it a chase as things started to congeal into a linear MCS, thus began the trip home. 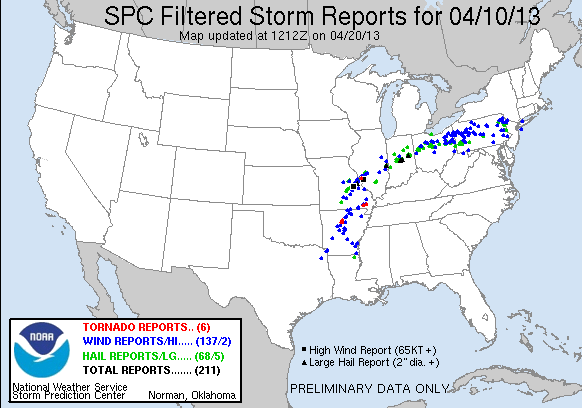