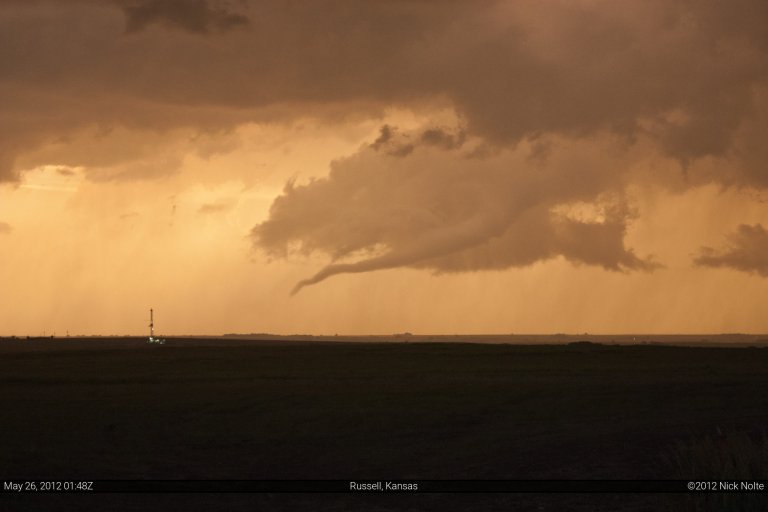 After spending the night in Topeka, I hit the road around 11am with the plan to head west to around Russell, Kansas, which was my staging area for the day. On the way, I got a hold of Brad Goddard to find he was already sitting in Russell, so I drove over and met up with him right near the interstate. Keeping an eye on the cap, we were expecting the triple point to be the play and maybe a cell or two down the dryline.

Shortly before 4pm we noticed some cumulus going up to our southwest, so we headed out of town to check it out. About 10 minutes after we left, SPC issued a mesoscale discussion for our area specifically mentioning the tornado potential near the triple point. We sat just off US 280 between Galatia and Susank for quite a bit while the agitated cumulus field tried to do it’s thing. 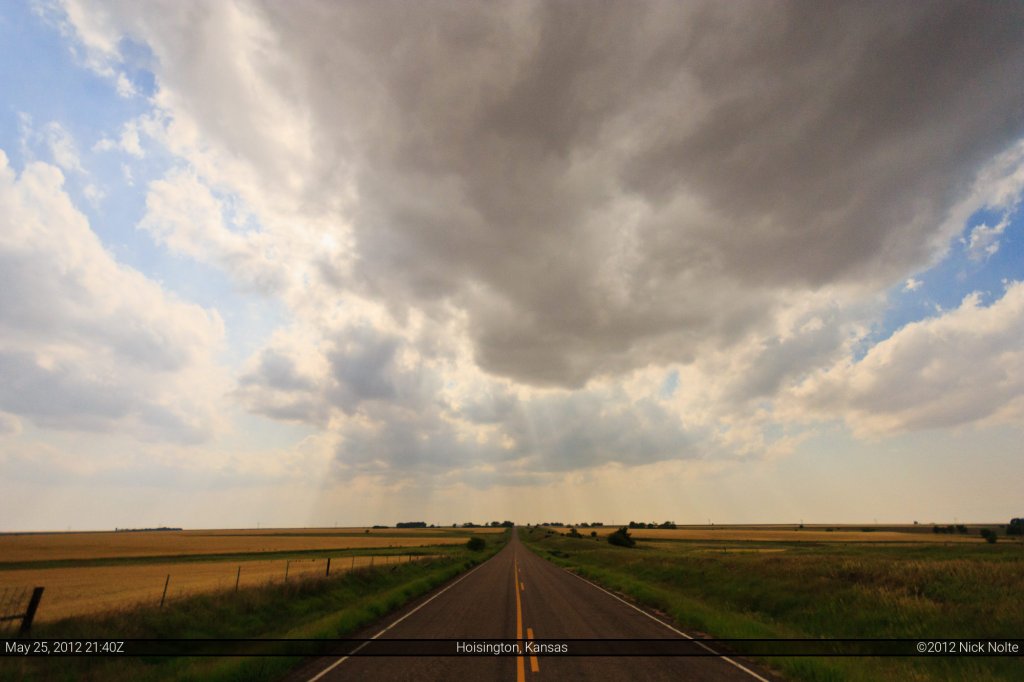 Right around 5:30pm a cell to our west had popped and was showing up on echo tops, so we headed west to check it out. 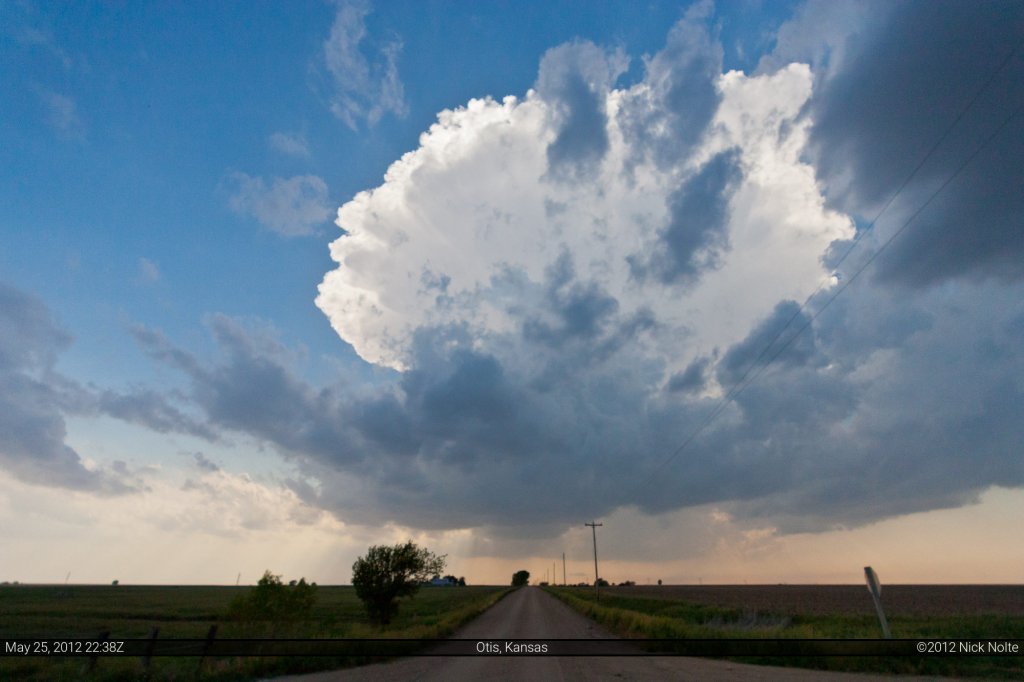 Turns out it had exploded rather quickly and was well near 50,000 foot tops in the above photo. It didn’t take long for it to begin developing a wall cloud, and it wasn’t moving too much which allowed us to stay in one spot and watch it for a bit. 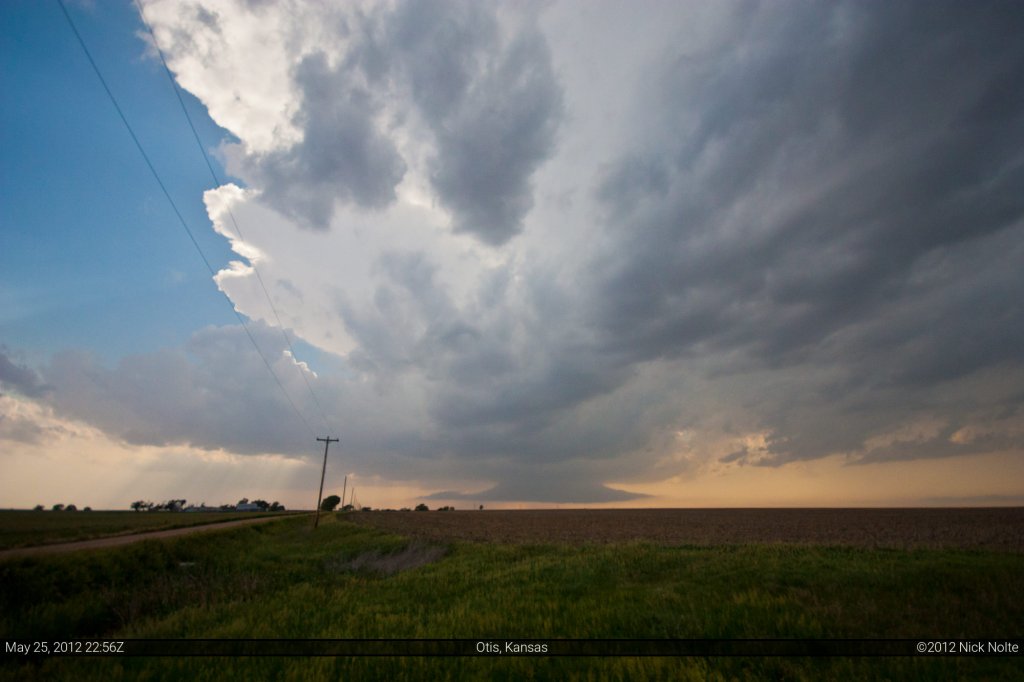 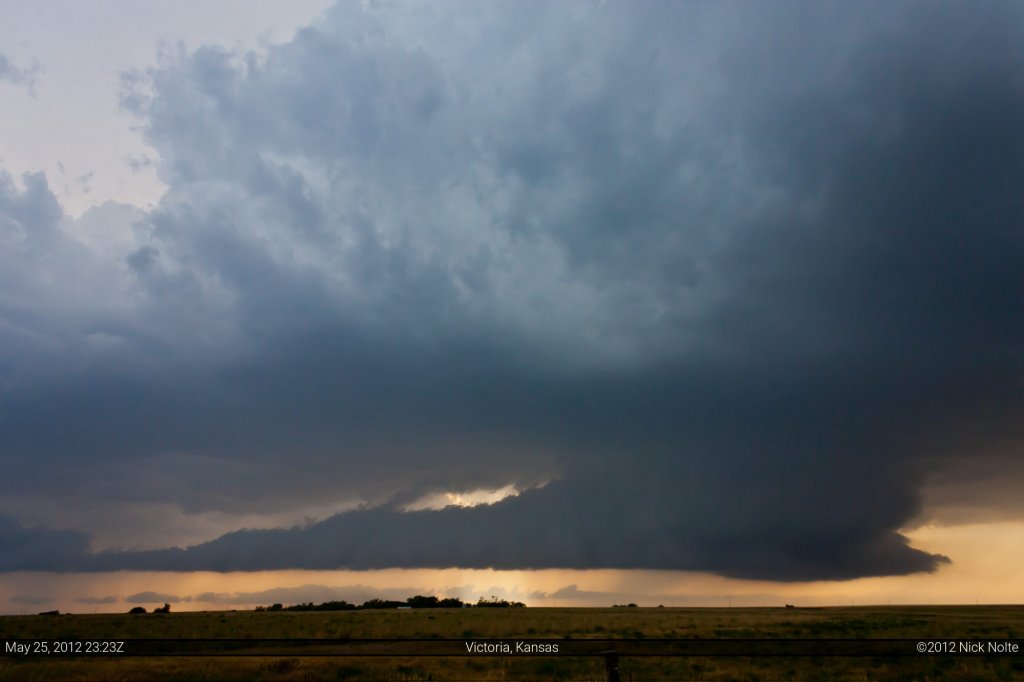 We even got to see Skip, Caleb and Phil fly by overhead (they’re the little spec just left of top center): 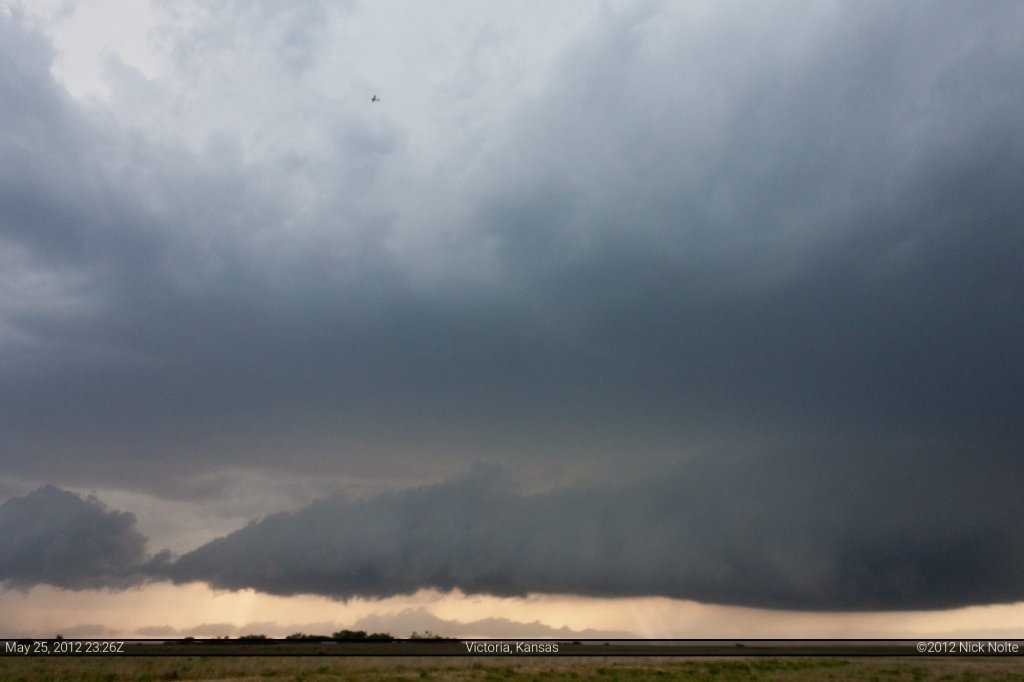 Below the wall cloud a little dust was stirred up on the surface. 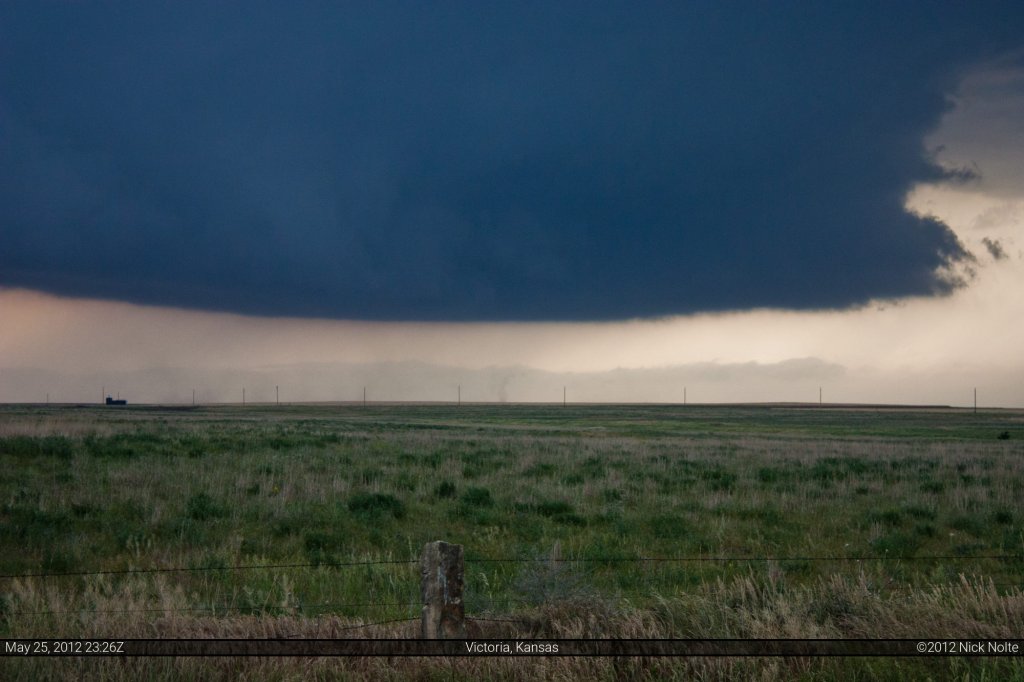 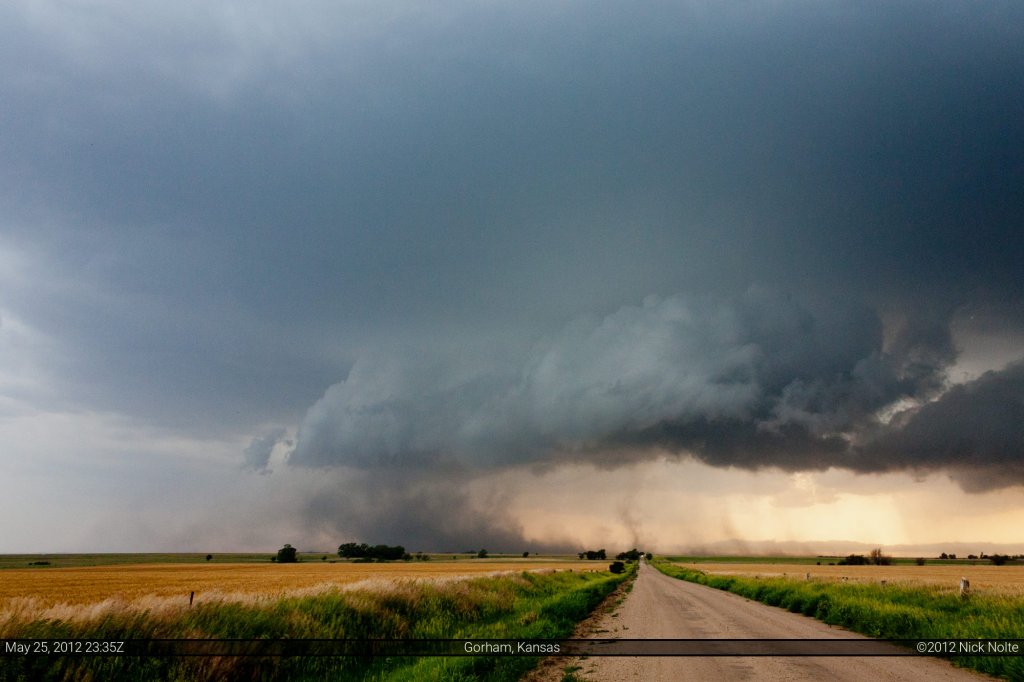 Shortly after this, the SPC issued one of the smallest tornado watch boxes I’ve ever seen, or been in.

Shortly after 0z, the storm spun up a brief tornado (later confirmed) beneath the wall cloud 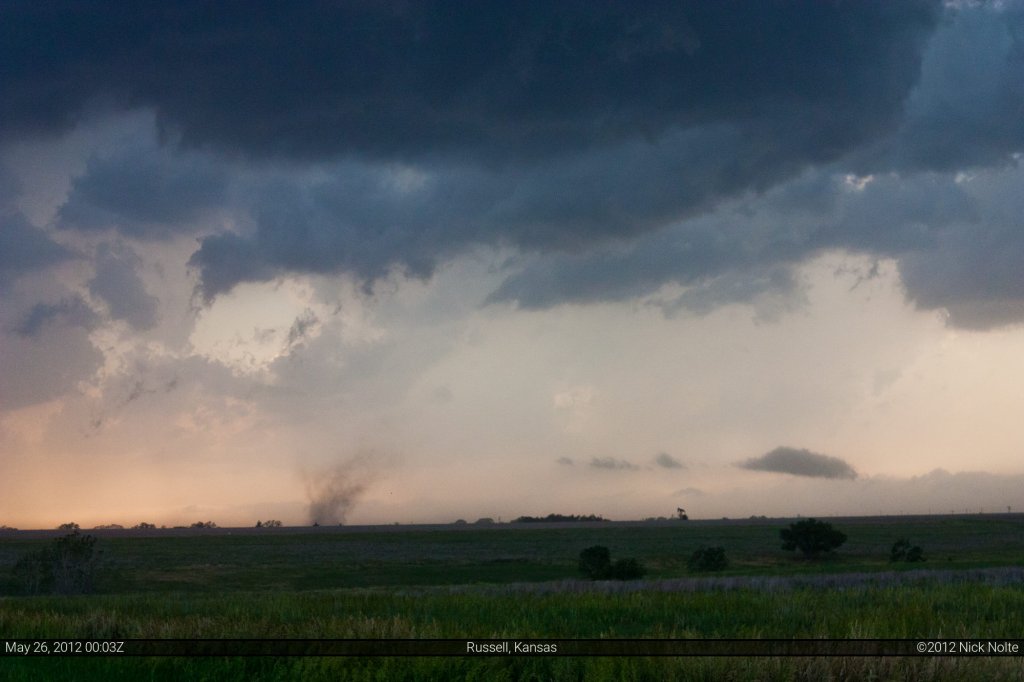 Then a few minutes later we saw this weird funnel thing 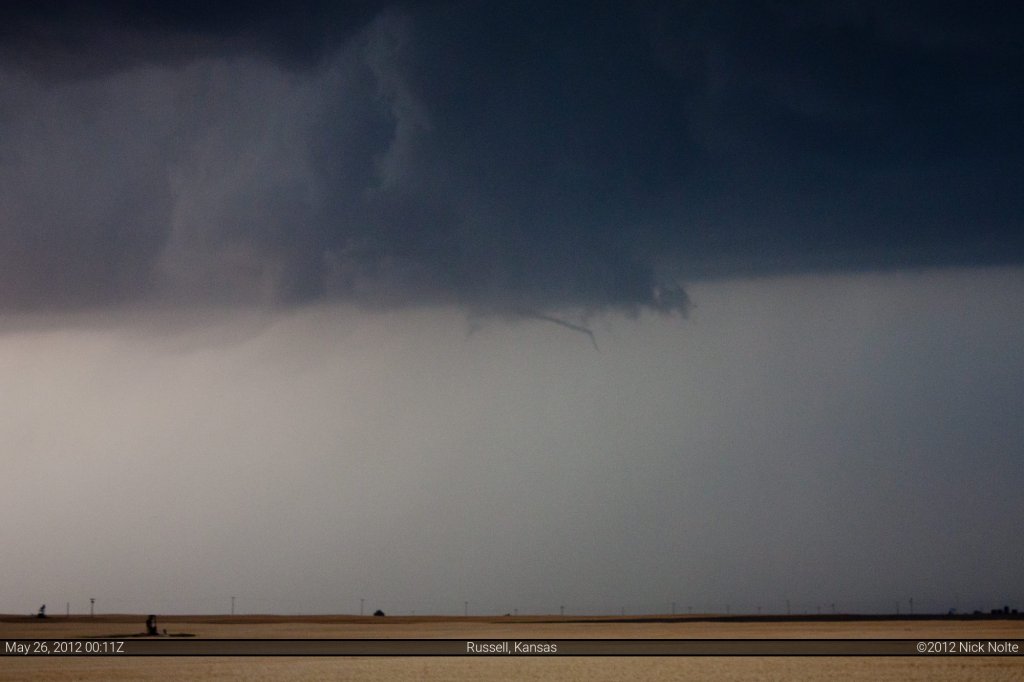 We followed the storm for a while until near I-70 where it started to look rather lackluster. We decided to drop down to the second storm in line. As we came up on the second storm it had no wall cloud, whatsoever, and looked extremely disorganized. We stopped briefly and both agreed to go after the next storm to the south and we began zipping down 120th Ave to intercept. About 10 minutes later I happened to glance in my rearview mirror to see the storm we dismissed had a massive wall cloud on it.

I didn’t have my HAM radio that day so I couldn’t hail Brad, so I started flashing my headlights like crazy, but he was a good ways up the road and later told me he was focused and in the zone trying to get to storm #3. Eventually I sent him a text message and finally we stopped and he was just as surprised as I was how quickly that wall cloud had developed, so we bolted back to the north to re-intercept storm #2. 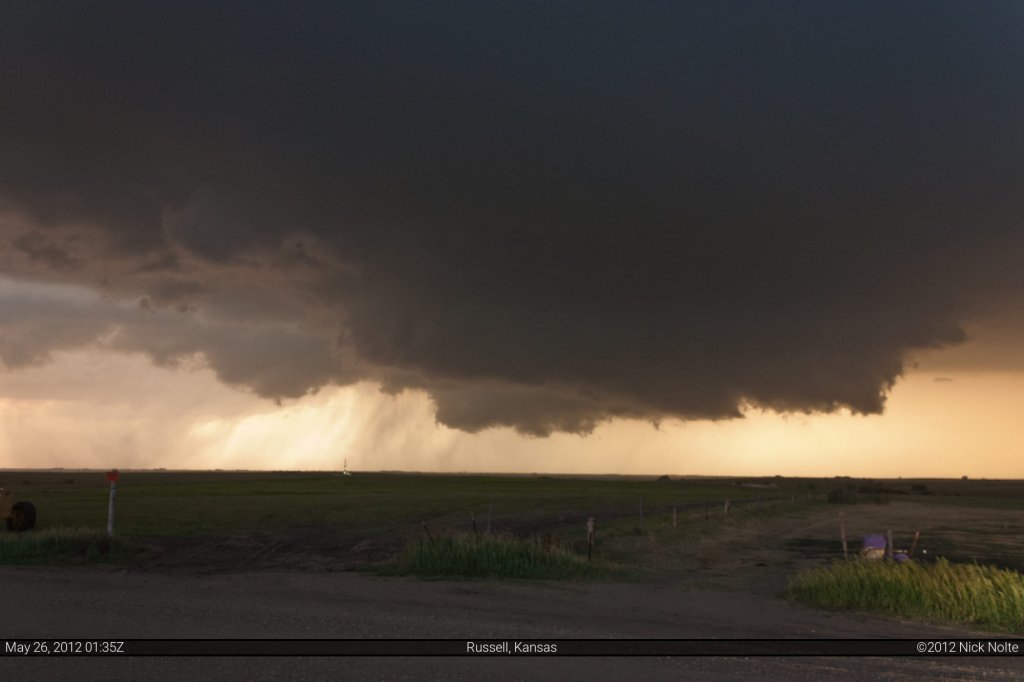 We found a pretty nice spot to watch the storm as the sun began to set. In retrospect, even though storm #3 dropped several tornadoes, I don’t know if we would have got on it before it got dark. Either way, now we were sitting on some random back road watching this storm churn away and trying it’s damnedest to do something, then finally: 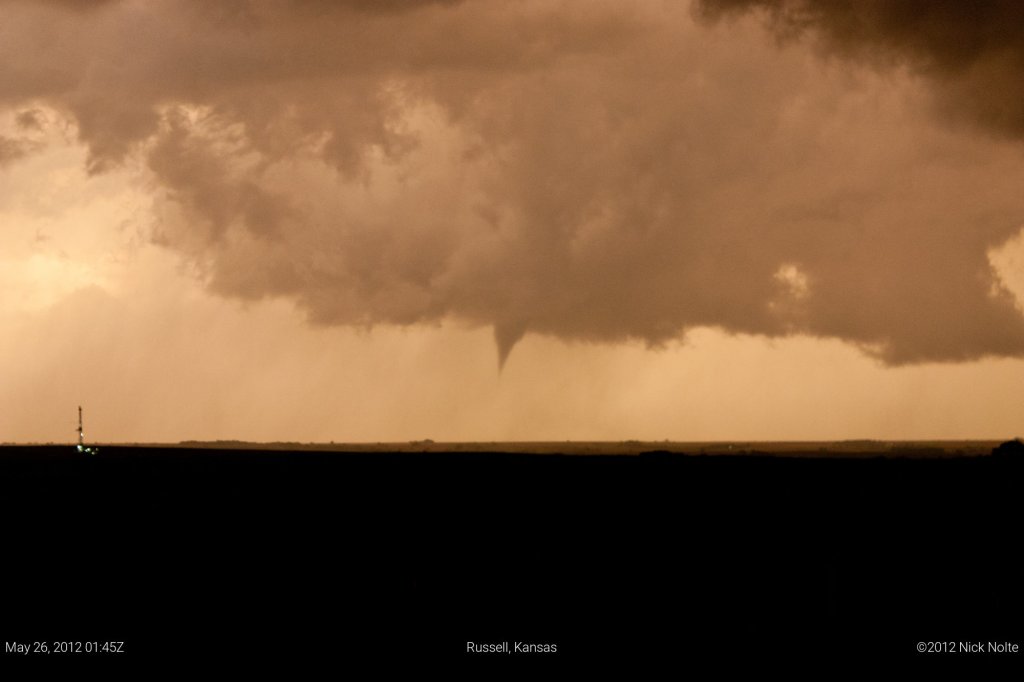 a nice slender cone descended from the cloud and touched the ground ever so briefly. 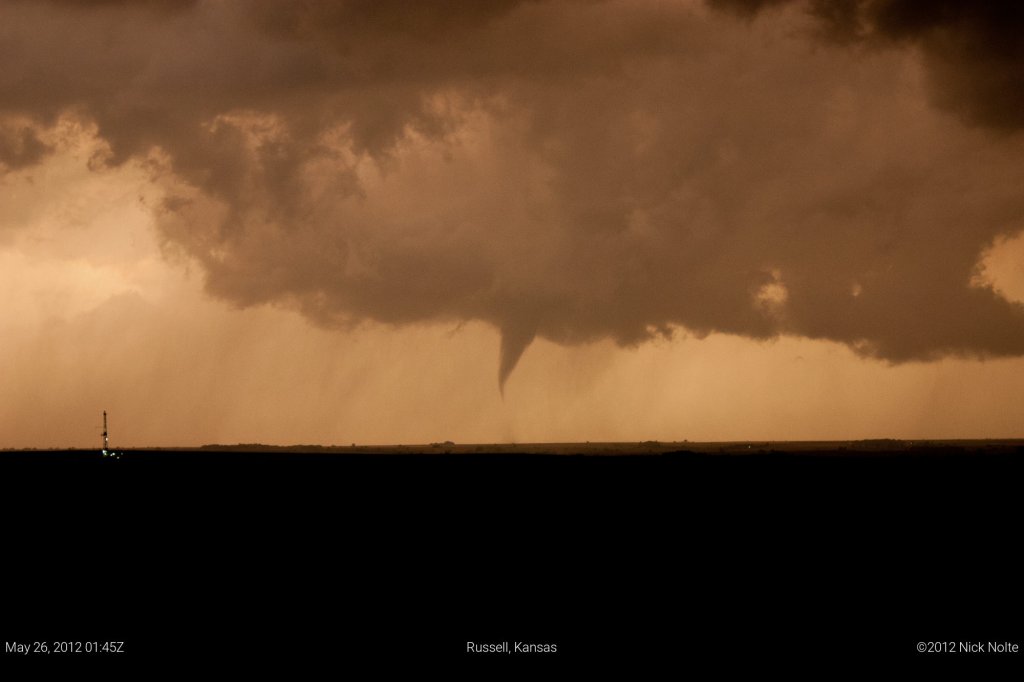 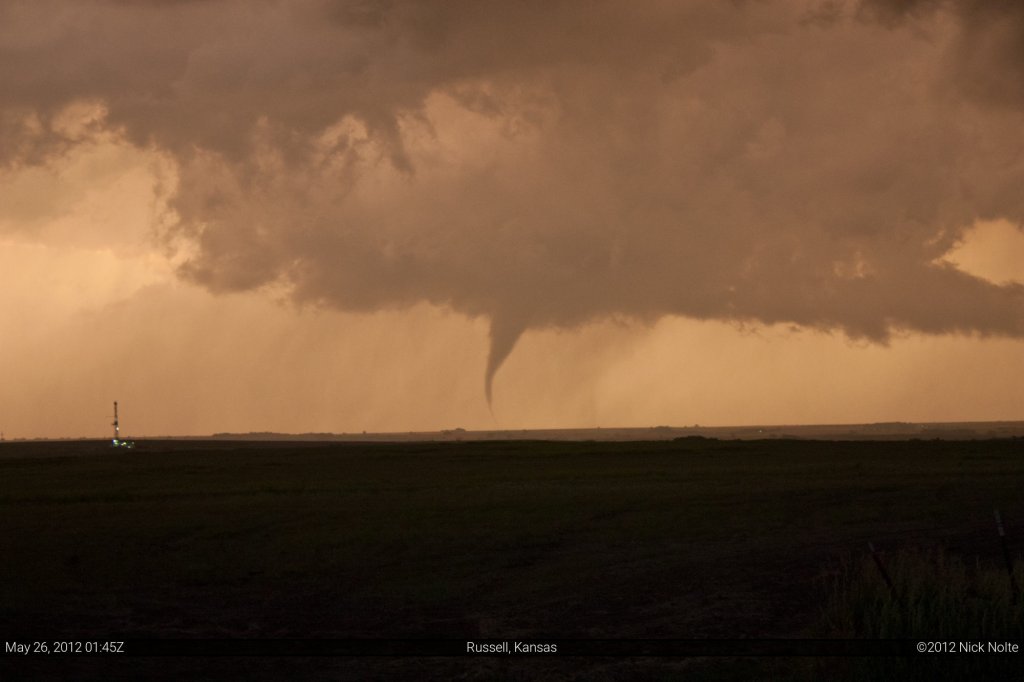 We both kind of chuckled once it lifted, “is that all we’re going to get? haha” Even so, it would have been a great, successful chase. However, Mother Nature was about to put on one of the most amazing shows I’d ever seen as this tornado roped out.

At one point the entire thing was detached from the parent storm and it was still kicking up a hell of a debris cloud. I hadn’t seen anything like it and we both just stood there pretty amazed at what we were watching.

We followed the storm for a bit longer, up until it got pretty dark as it moved across the highway.

After a while we called it a chase and headed to Salina.