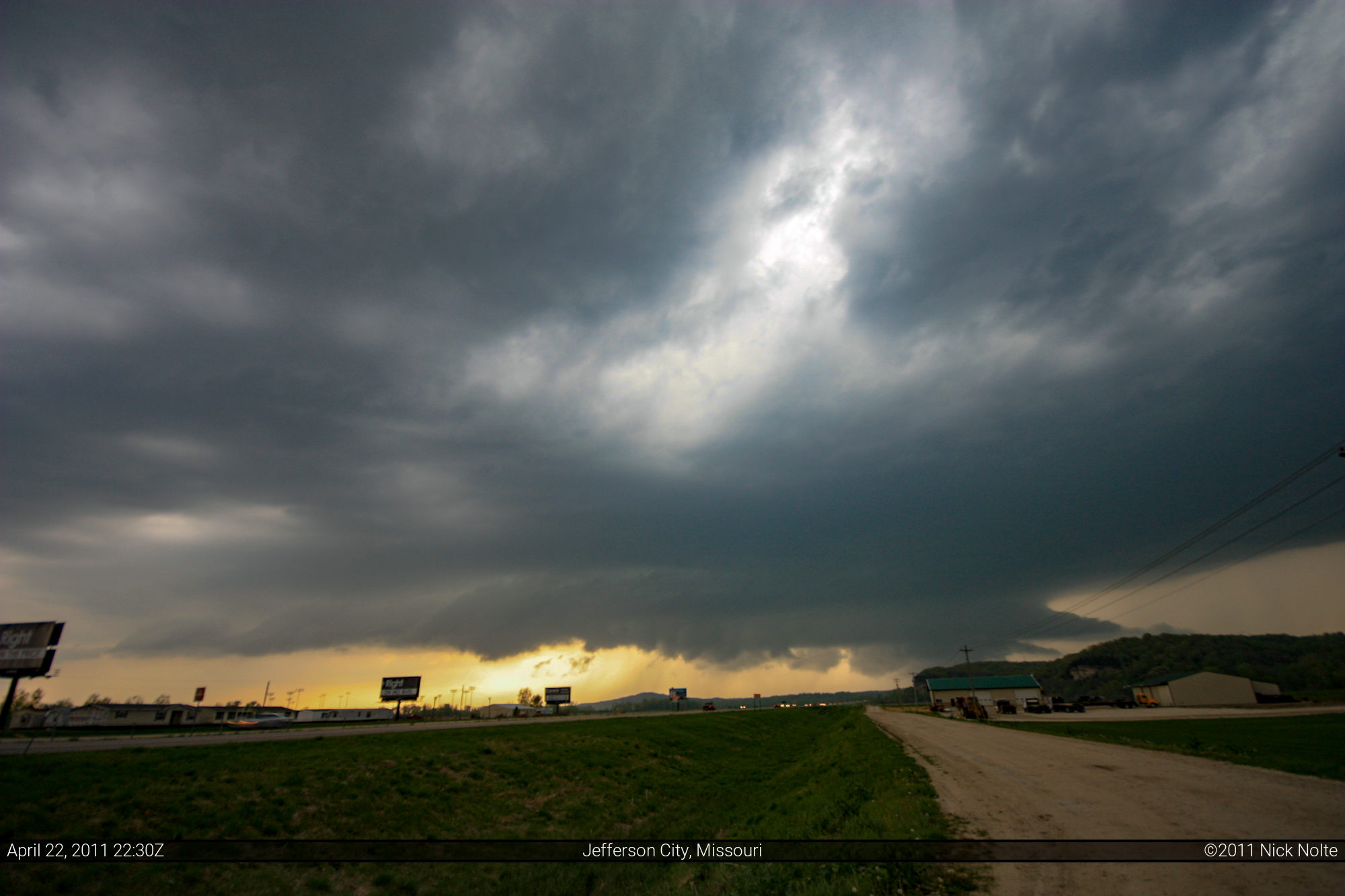 A surface low was expected to swing through Missouri with an attendant warm front draped across Missouri, Illinois and Indiana, as well as a trailing cold front extending back into Oklahoma.  The question was whether or not there would be a decent shot at tornadic storms.  The SPC had placed a large 5% tornado risk across southern Missouri, Illinois and Indiana.   I took off from home around 8am in the morning.  As I got closer and closer to Missouri, the visible satellite was showing a pronounced clearing across the bottom of the state along and south of I-70. It became clear that the greatest destabilization would occur in this area.

I hit I-70 near St. Louis at about 3pm and the cold front started lightning up on the far western side of the state.  As I blitzed west, the other parameters were becoming more and more primed for severe weather.  The 1km EHI was already at 6+ across SE Missouri, bulk shear was 50-60kts across the I-70 corridor, MLCAPE was 2000, 0-1 SRH was over 300 and STP was at 8.  Things were looking pretty good for tornadic storms.

I finally got on one of the storms near Jefferson City at 2240Z and there was a nice lowered wall cloud presenting itself.

The majority of the rest of the day was spent tracking this storm along highway 94 as it pretty much paralleled the Missouri River.  The photo above, is the only decent still shot I got of the storm.  As I progressed eastward there was apparently a report of a funnel on the storm, but the terrain obscured the storm for much of the time not allowing a good look beneath the base.  Near Tebbetts, I got off the highway and started to track the storm on some back roads.  It was looking pretty good, here is a screen grab from video:

Shortly after the photo, I got back on paved roads and fell in behind Jeremy Degenhart and Jesse Risley who were also tracking the storm.  We all stopped to observe east of Steedman at around 2312z and decided to proceed forward as the storm was pulling away.  After a while we managed to get in front of it again and ended up driving right in the hook, but was unable to see any interesting features descending from the base.

Soon enough our east road ended and we needed to blast north to get back to I-70 to stay in front of the storm.  Unfortunately, the windy, narrow roads hindered our expeditious travel and caused a convoy of about ten vehicles to get cored by the storm.  The hail was mostly 2-inch diameter, this caused me to get my largest dent to date.

As we finally got back to I-70 we had to deal with the slow traffic as we tried to catch back up to the storm. I eventually departed from the convoy and took I-64 south and stopped around Chesterfield as darkness fell.  It was around this time the tornado warning was issued for St. Louis.  I continued east towards the city and then turned north on I-270.  The storm was still west of me at this point and up ahead was a traffic backup!  What a disaster. A confirmed tornado was heading towards this area and traffic is going about 20mph on I-270.  Fortunately, for me, I think this delay prevented me from driving into the tornado.  I was driving in the left lane and the rain was coming down rather hard.  Near Maryland Heights I noticed a disabled car in the left two lanes facing sideways.  A car had pulled off on the shoulder to assist.  I navigated around, and as I did, I looked around and saw all the trees snapped on either side of the Interstate.  The tornado had crossed through here not five minutes earlier.

The tornado would later track just south of, and parallel to, I-270 across the northern part of St. Louis where it significantly impacted Lambert International Airport.  The tornado, later rated EF-4, was the strongest tornado to hit St. Louis since 1967. Amazingly, no deaths were reported as a result of this storm.  Here is a video compilation of the chase day

Jesse Risley, who I had been chasing with earlier in the day caught some rain wrapped video of the tornado as well as the damage at the airport later that night: