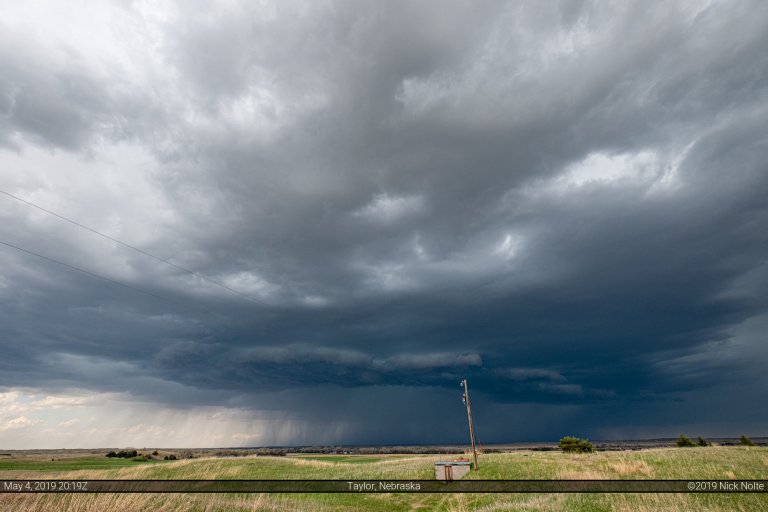 May 4th featured a marginal risk for severe weather across central Nebraska. While the probability of tornadoes was near zero, it was still a weekend and a short drive to check out some storms.

I took off from Grand Island a little after 1pm and drove up highway 2 with a plan to target the Brewster area north of Broken Bow just into the sandhills where a cumulus field had developed.

By this time a cell had started to go up northeast of Thedford along what appeared to be a wind shift boundary and it looked like additional storms would fire to the southwest and generally move in an east southeast direction. With that in mind I began northwest on highway 2 towards Broken Bow.

By the time I got to Ansley it looked apparent I would need to get north towards Burwell as the strongest storm was just north of Brewster, so I went north on US 183 and arrived in Taylor right at 20z.

The storm had a nice updraft base but not much for low level structure. It appeared to be making a direct path towards the Calamus Reservoir and I thought it’d be cool to see it approach the dam.

As I approached the dam, the lightning bolts started to pick up and as I turned onto the road that crossed the dam one struck in the reservoir just to my right.

I drove to the other side of the dam and sat for a while watching the storm approach until I decided to head back across and begin the trek home when another bolt struck in view of the dash cam, this time striking a guardrail post 50 feet in front of the car.

This strike appeared to electrify the metal cabling of the guard rail as you can see sparks emanating from the cables between my car and the bolt. A little safety reminder to not stand next to metal fencing!

After that the storm let up on producing prolific lightning bolts and began to weaken so I decided to call it a day and head back home!