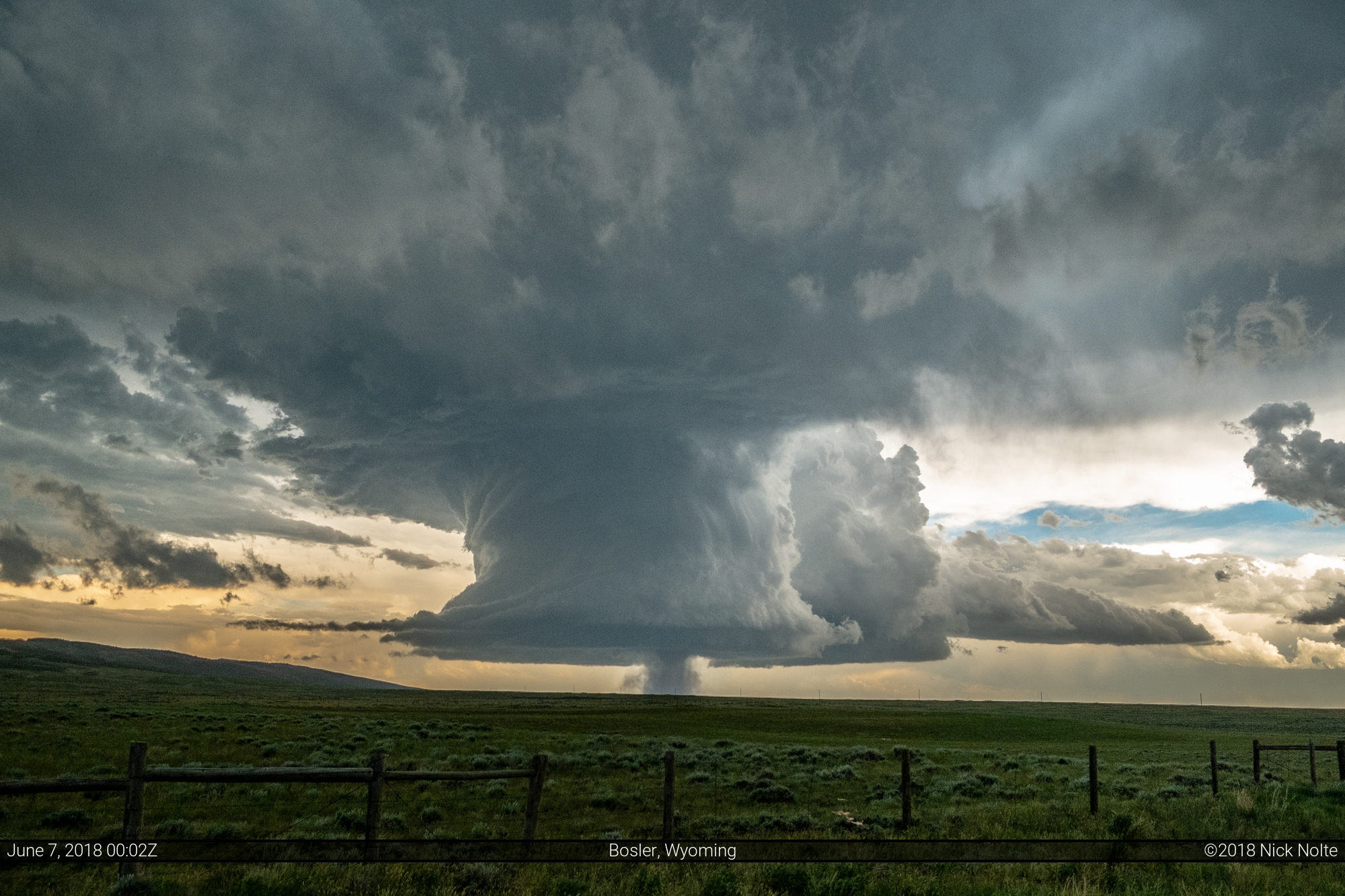 After the last chase on the 3rd in New Mexico proved somewhat successful, I spent the 4th repositioning north from New Mexico to South Dakota. The plan was to chase North Dakota on the 5th, but despite a 2% tornado risk near Bismarck, that day ended up being a bust. I drove from Bismarck to Rapid City that evening and planned to chase the I-25 corridor in Wyoming on the 6th. I just didn’t know whether it would be northern or southern Wyoming.

SPC had outlined a broad area of 2% stretching from Cheyenne across Nebraska to Lincoln, then south along the dryline towards Dodge City, Kansas. There was also a small area outlined in north central Wyoming just east of Yellowstone in the Bighorn Basin. What interested me the most in the setup was the high surface dewpoints already present in southeastern Wyoming with easterly flow forecast throughout the day. Cheyenne was almost to 60°F dewpoint with mid 50s stretching west into the Laramie Range. It struck me as a rather rich moisture setup for the elevation, so I drove to Wheatland as an initial target as I decided to play the southern Wyoming area.

While sitting in Wheatland, the cells developing to my north near Douglas caught my attention and I moseyed on up to check them out. They were still sitting on the mountains, refusing the roll off, but did provide for some picturesque scenery.

While observing these storms, I noticed the dryline on radar to the west of Cheyenne starting to march westward into the hills. This caught my attention and made me decide to drive back south as I expected storms to begin to form near and along that boundary west of Cheyenne and Laramie.

The passage of the dryline was recorded with a corresponding to a spike in dewpoint readings at many weather stations around the Laramie area:

A new storm developed near Medicine Bow and was eventually warned, but it also stayed in the mountains. I ventured west from Wheatland to try and get closer to it, but had issues with decent roads continuing into the hills. I never could get a visual on this storm despite it being warned and showing decent organization on radar.

The METAR at the Medicine Bow station was reporting an 18°F dewpoint while this storm was on-going, indicating it was developing right on the dryline. As the storm weakened, I drove back to Wheatland then decided to head south to check out the newly developing storms north of Laramie.

I sat and shot some video of this storm for a while, but noticed it, too, wasn’t moving off the mountain. So, I made the decision to head southwest down highway 34 and try to get up close to this thing and see if there was anything to see. As I would soon find out, I should have left this spot about ten minutes sooner!

While trekking up the mountainside the storm went tornado warned despite looking like a minor rain shower on radar. Meanwhile I was able to get peeks at the storm through valleys in the hills. While not seeing beneath the storm, the edges of the mesocyclone were incredibly sharp and well defined, some of the best structure I’d ever seen. I grew anxious as time went on not being able to see beneath the storm!

I was assuming something amazing was in sight if I could just get my eyes on it. Eventually, I came around a corner where the hills gave way to an unobstructed view of a tornado in progress:

A tornado ongoing beneath an extremely picturesque and well sculpted supercell at 7,000 feet in elevation! This was easily one of the most stunning storms I’d encountered in my chasing career.

Shortly after the storm chase was over I met up with fellow chaser Willoughby Owen who had posted some of his own spectacular shots from this storm. Here’s one from his flickr account

And video from my account of this amazing storm!