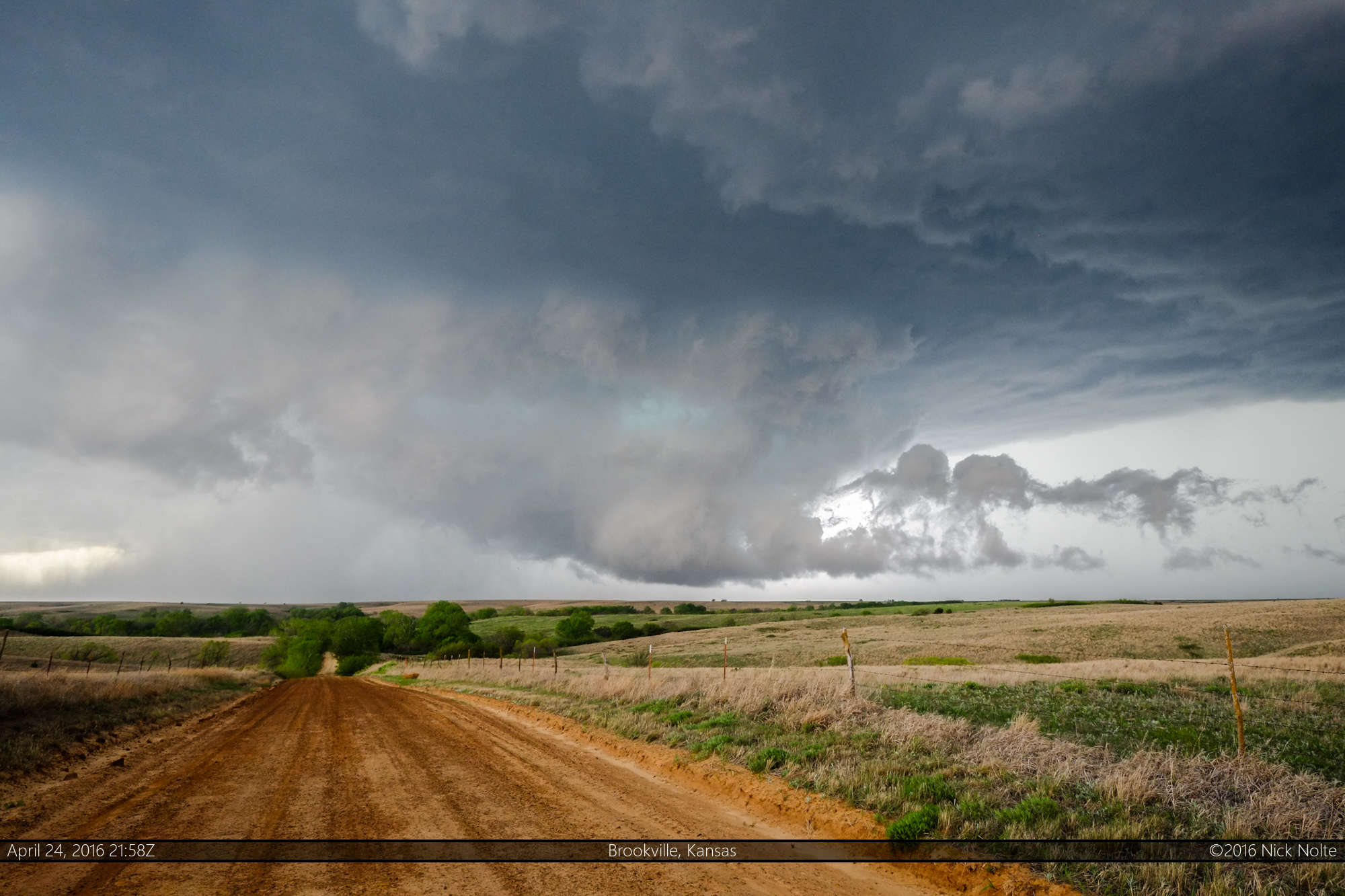 Not having chased since the middle of March meant I was itching to get out to The Plains. Fortunately an opportunity presented itself for several days of severe weather from April 24th through the 30th. I took the week off of work and headed out to Wichita hoping to find a target every day.

The 24th featured the first of a string of days in which severe weather looked possible. A surface low in the Northern Plains with a cold front/dryline stretching from South Dakota into Texas as a closed upper low spun through the Northern Plains through the day. Low 60°F dewpoints were expected to advect northward providing a narrow band of instability east of the dryline from Texas into Oklahoma and Kansas. Mid level winds on the order of 40kt to 50kt provided the foundation for moderate shear, 40kt to 50kts across the warm sector. SPC had outlined an enhanced risk from Omaha down to Salina with surrounding slight risk from Sioux Falls, SD to Woodward, OK.

I had driven overnight to Salina and decided to hang around that area for a bit. Looking over the data it looked like models had been underforecasting the moisture by a degree or two which would indicate the potential for higher instability than originally forecast. As a cumulus field started to bubble to my northwest, I ventured out of Wichita towards Hutchinson.

I continued northwest to Hutchinson, deeper into the developing cumulus field and from there I could see initiation taking place even further northwest near Great Bend as a towering cumulus appeared in the distance.

I moved to Lyons and sat and watched the developing storms to the northwest as they grew from little blips on the radar into full fledged storms.

The storm became severe warned, so I decided to continue north and intercept and trail it. There was actually a period where a wall cloud started to form but it was very narrow and blocky and a couple of reports showed up on spotter network of a funnel cloud. It was a pretty good look-a-like, but, of course, not a tornado.

Throughout it’s life it exhibited a few decent wall clouds with minor rotation, but most of the time it was pretty ragged looking as I tracked it from Ellsworth to Salina despite some decent looking velocity signatures on radar.

Eventually I met up with Skip Talbot at an interchange with I-70 at Solomon as we watched the storm drift away. We decided that we may as well keep up with it until dark and continued east on I-70. We got back in front of the storm and south of Manhattan found a scenic overlook where we were able to watch the storm in the distance until dark. The overlook filled up with chasers and there was easily twenty or thirty vehicles pulled in all eyes on the storm. Eventually it got dark and we decided to catch dinner in town before I started back to Salina for the night.