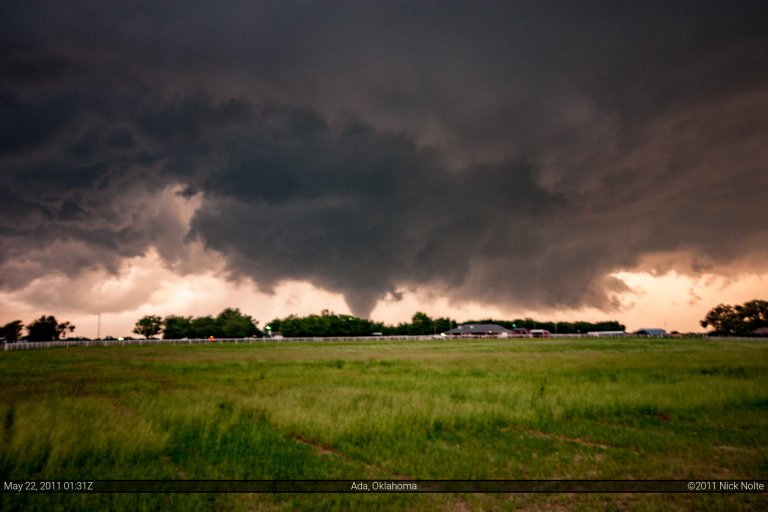 I was chasing with Rob Hurkes and James Seitz from Minnesota these few days.  Our target this day was Purcell, Oklahoma. We departed from Wichita, KS at 1523z and began our trek down I-35. In similar fashion to the day before, a pacific front/dryline was expected to be the trigger for storms in eastern Kansas and Oklahoma. The threat for tornadoes would increase as the day wore on and the LLJ kicked in. After sitting in Purcell for two hours we started to get restless and moved east towards Asher as the dryline advanced. After twenty more minutes in Asher we moved north to Tecumseh in an effort to position ourselves to the northeast of the dryline bulge we were seeing on KTLX. After an hour went by we decided to head back south to the cumulus field that started to present itself on visible satellite. Shortly after 23Z storms began to develop south of Ardmore. The show was starting.

As we approached Sulphur a report came in on Spotter Network of a funnel cloud in the town. As we drove in (2348z) we also witnessed a funnel cloud, followed by a thin needle-like tornado that touched the ground. We found a nice parking lot to pull into to watch as the meso came through town. Incredible rapid rotation as funnels appeared and disappeared. At one point two funnels with a horizontal vortex appeared simultaneously for a second or two. As the meso slid off to our north, we were right in the inflow jet where winds were easily 60 mph. 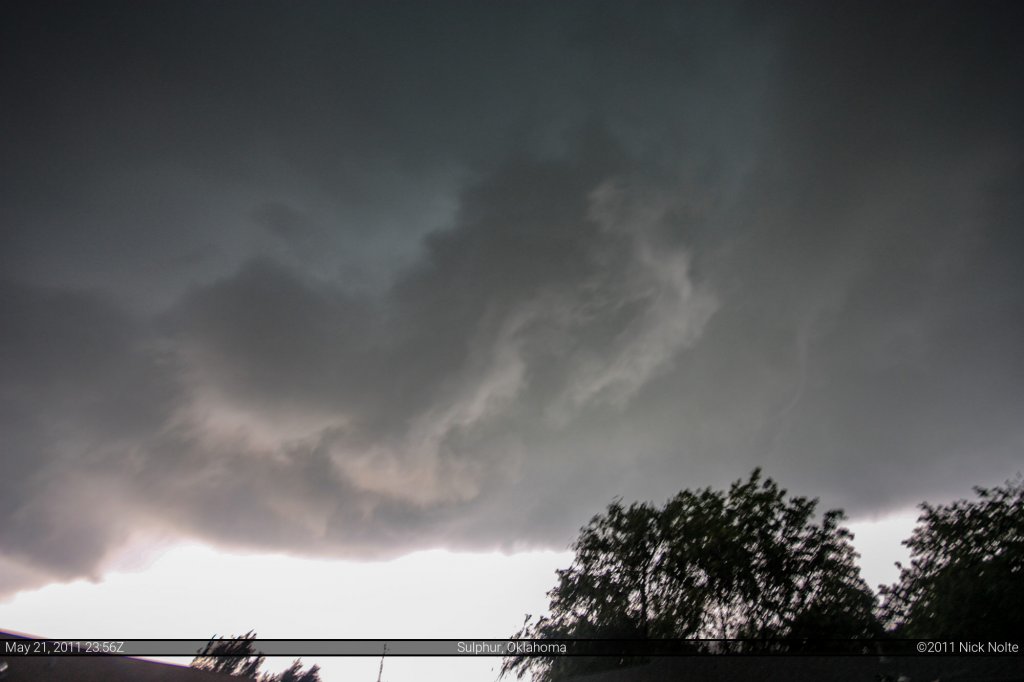 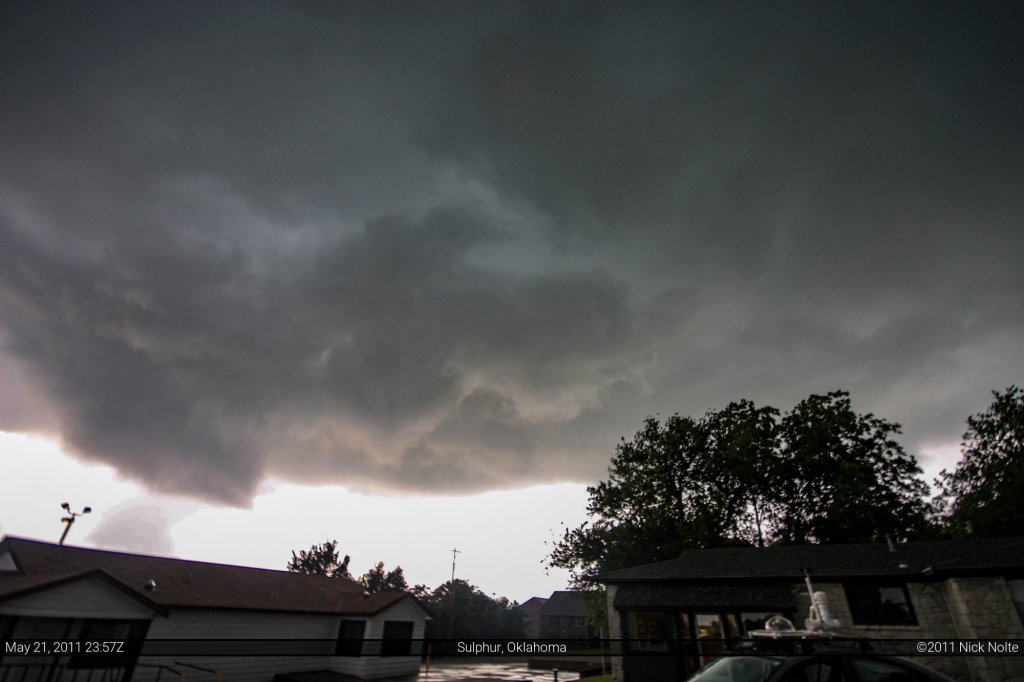 After it tracked through Sulphur, we trailed it east on highway 7 where we stopped to observe a wall cloud try to get organized about two miles east of Sulphur. It tried a few times to wrap up, but just couldn’t get it done. We continued east on highway 7 stopping about 3 miles south of Hickory to observe the storm as it trundled across a few fields. Here, two brief touchdowns followed by a large cone that touched down with two tendril vortices rotating around each other just above the surface.

We then turned north on highway 1 to catch back up to the storm and managed to locate County Road 1650 east out of Roff which was paved and allowed us to drive right up to the back of the meso. Here we witnessed 6 separate tornadoes as a violently rotating meso was dropping slender tornadoes left and right, also dropping a more defined stovepipe tornado which did not fully condense to the ground. We watched all this unfold about a mile west of the intersection of County Road 1650 and County Road 350. Despite our calling it in twice and reporting via Spotter Network, it has still failed to show up in any storm reports from OUN. We then continued east where we passed some snapped power poles 3/4 of a mile east of the aforementioned intersection where the tornado(s) had crossed the road.

As we continued on we noticed that another supercell to the north, that Ben Holcomb had texted me he was on, was starting to eat our southern storm. We found this particularly odd, but when we hit US-377 we diverted north to intercept the now dominant northern supercell. We pulled into a dirt parking lot at 22/131z just west of Pickett and watched as an organized wall cloud dropped a stovepipe tornado about two miles to our northwest. We managed to watch from birth to dissipation and then remained there observing the crazy churning of the clouds around us. 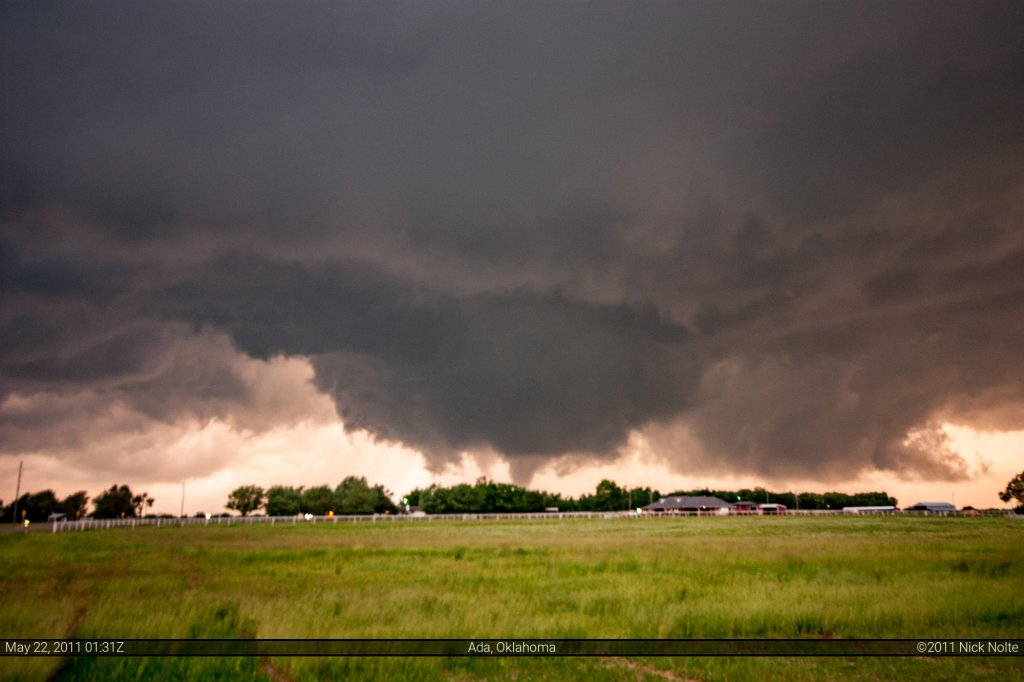 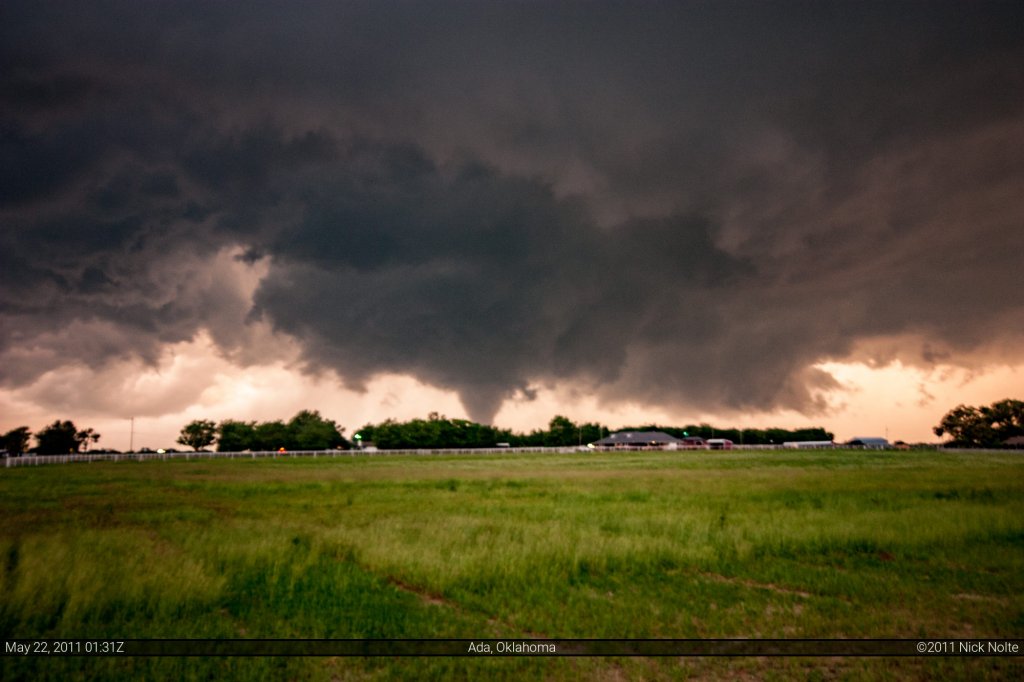 Eventually, we recognized the chase was over and headed back to Ada where we checked into the same hotel the TIV/Discovery crew was staying, so Rob finally got to see the TIV. We later met up with Ben Holcomb at the Applebee’s in Ada to celebrate the days success, where just about every storm chaser in the country was having dinner. While here I finally met my media broker, Kendra Reed as well as Janette Bontempo. Another great chase day for me and a great times with friends later.