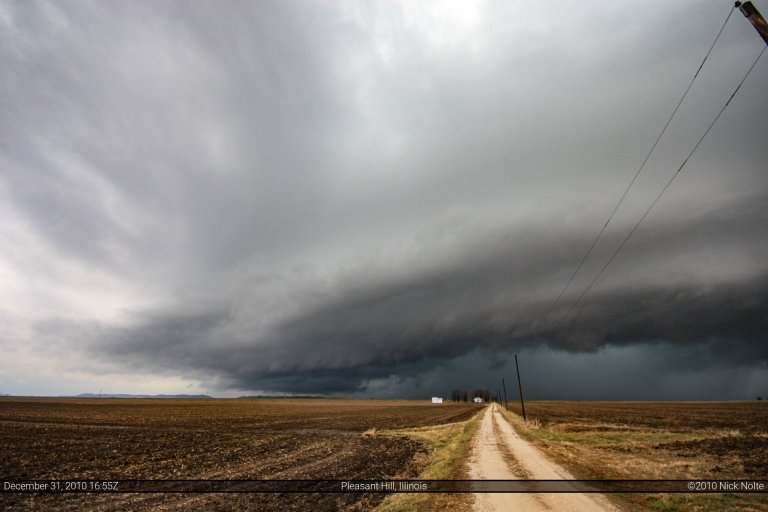 It’s not often you get an opportunity to chase on New Year’s Eve, so I took a shot with this setup.  I had just got back from Christmas with family in Iowa on the 28th and the forecast models and chatter was indicating a possible severe weather outbreak for the 31st.  I kept my eye on it for the next two days and the only thing I was hesitant about was the amount of instability that would be available to the area I would most likely chase.  This event presented two target areas, the first was the obvious one down along the Gulf Coast and Arklatex area where moisture return would be a piece of cake and the cold front would slam into the warm sector.  The other was the triple point near the surface low which was going to be in eastern Iowa on the 31st.

Since I was not up for driving to the Gulf Coast, by necessity I was limited to the northern target.  Models were showing 250 – 750 J/Kg of CAPE along a very narrow axis of instability stretching from West Central Illinois down to Arkansas.  The moisture and instability was really the only lacking ingredient.  The rest of the energy was there as a 150 kt H3 and 110 kt H5 jet streaks were rounding the base of deep trough placing my target area in the right front quadrant area which is prime for upward motion.  I decided on Thursday night to hit the road and get to my target area as I had a feeling that the play would be early in the day as storms were expected to be ongoing throughout the night.  So, that night I drove to Jacksonville, Illinois which is about an hour or so north of St. Louis, MO.

When I awoke I was a bit disappointed to see my area wasn’t even close to the slight risk outlook from the SPC, but shrugged it off as I figured everything was there except the CAPE to get this pulled off.  What amazed me is dewpoints were already pushing 50 when I awoke at 8 am and moisture was continuing to advect into the area, so my SPC disappoint turned into a bit of optimism.  As I checked out what was going on, a line of storms was already ongoing across Missouri and Arkansas.  I decided to head out because I figured the line, even though it was firing along a pre-frontal trough, was going to be the play.  I drove west on I-72 then south on US 54 to IL-96 where I hung around northwest of Pleasant Hill, IL to catch the show as it crossed the river into Illinois. 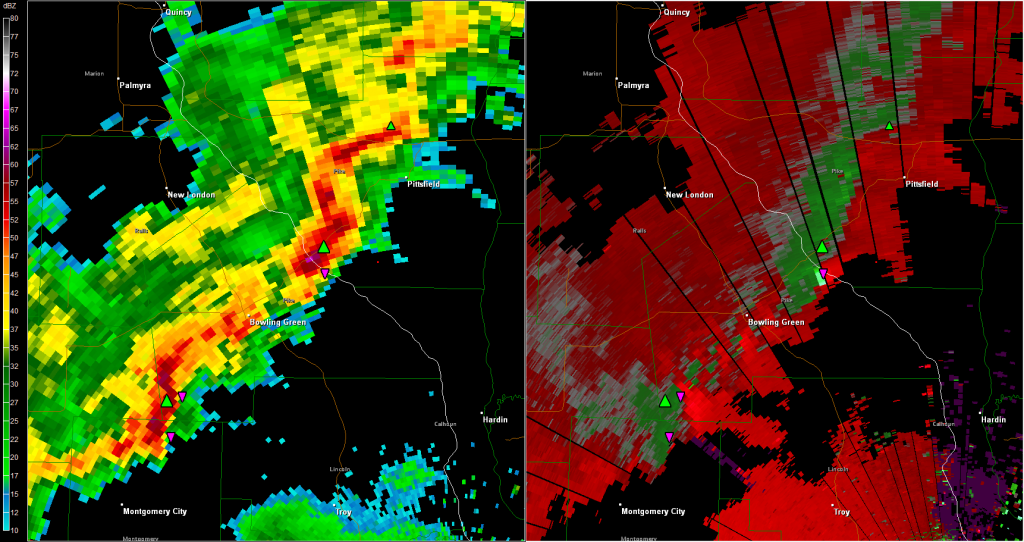 There was a definite couplet on the velocity scan and a hook on the reflectivity and I was under a tornado warning at the time.  That’s when I noticed a strange feature reaching down from the base of the storm to the ground. 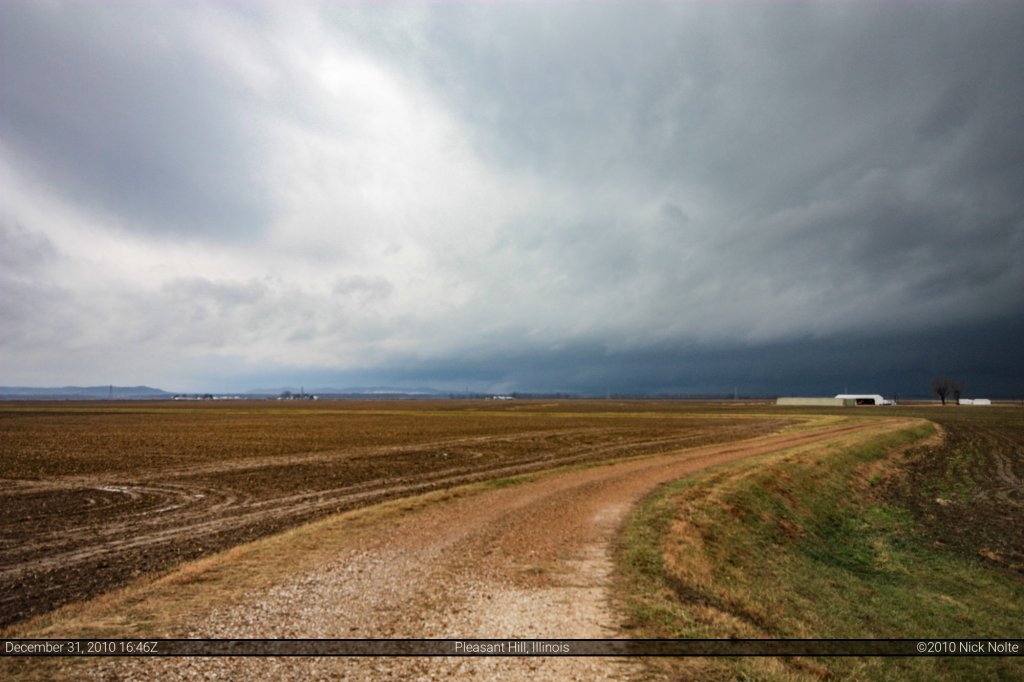 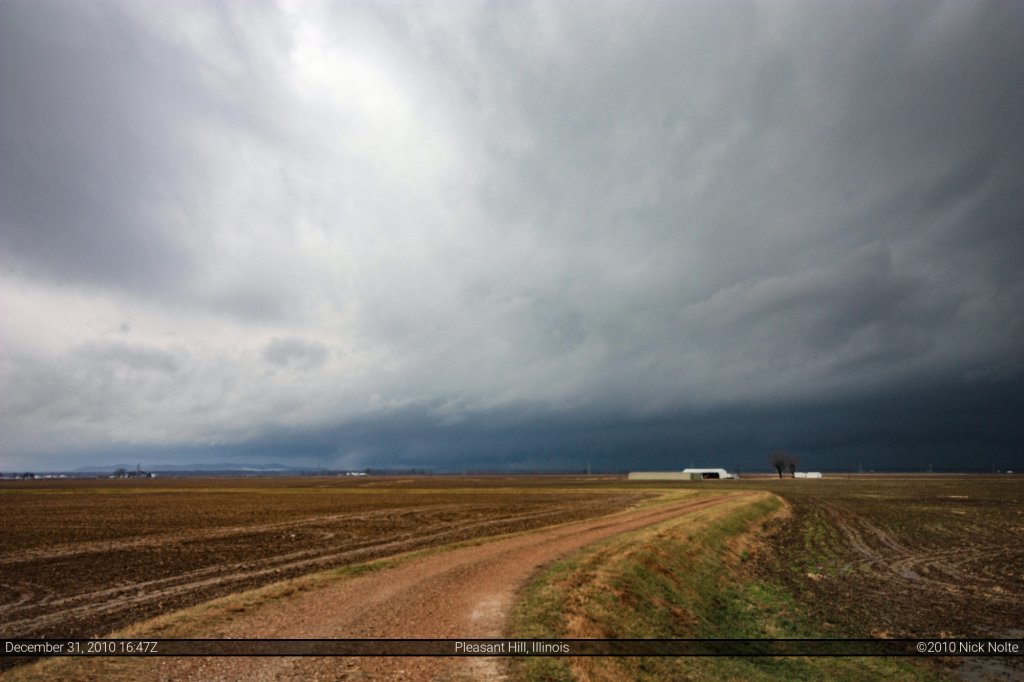 In the initial photos it is a little hard to see, but it is right over the white structure left of center, in these next photos it is a bit more obvious

What made this feature interesting is that it was moving to the south while the storms were moving to the northeast at around 40 mph.  Here are two videos I have uploaded to YouTube which show the feature.  The first is a HD video zoomed in and the second is a wider shot from my dash cam which records in time lapse.

Here’s a couple of more shots of the storm as it got closer and I repositioned myself a bit southAfter discussing this mysterious feature with several other storm chasers we’ve decided that the most likely explanation is cooler air, possibly even snow fog, was being lifted by the storm updraft along the interface of a localized gust front that was moving away from the storm. 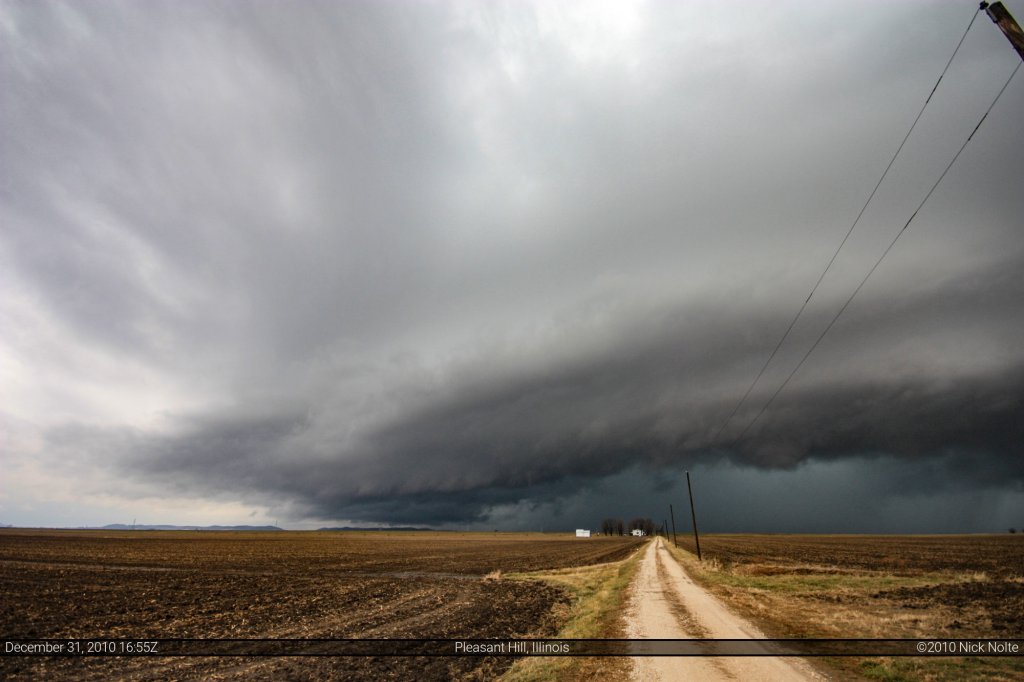 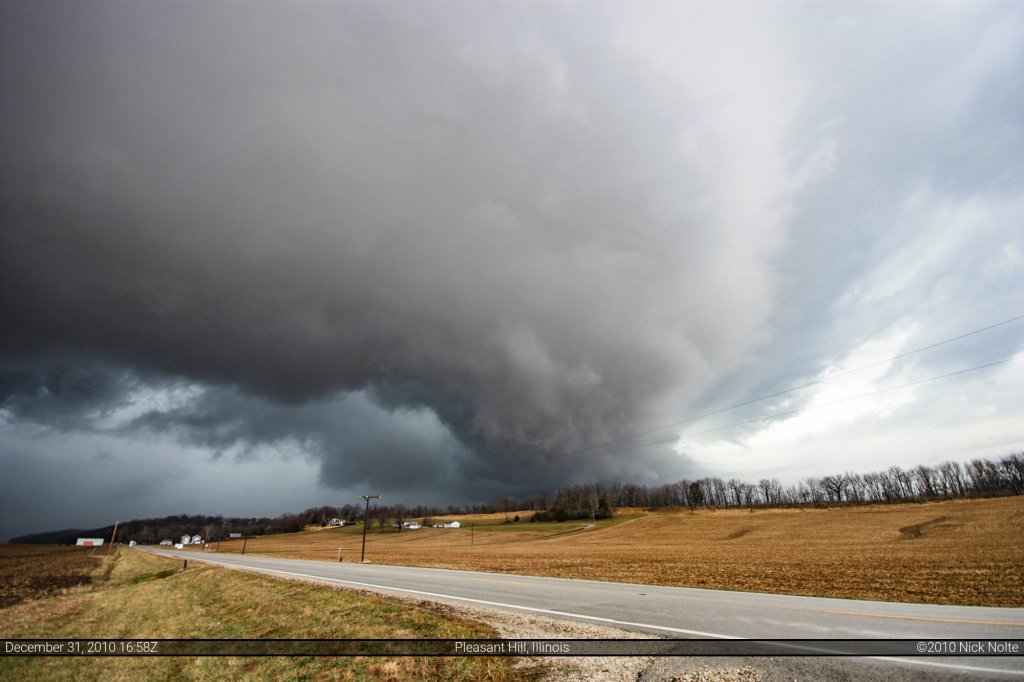 A few hours later while I was following the line back a feature caught my eye as I drove along I-72 around Jacksonville.  I grabbed my camera and snapped a photo of what looked like a funnel cloud.  The photo is contrast enhanced as well as a radar grab of the storm that was just northeast of Jacksonville, the direction of the photo. 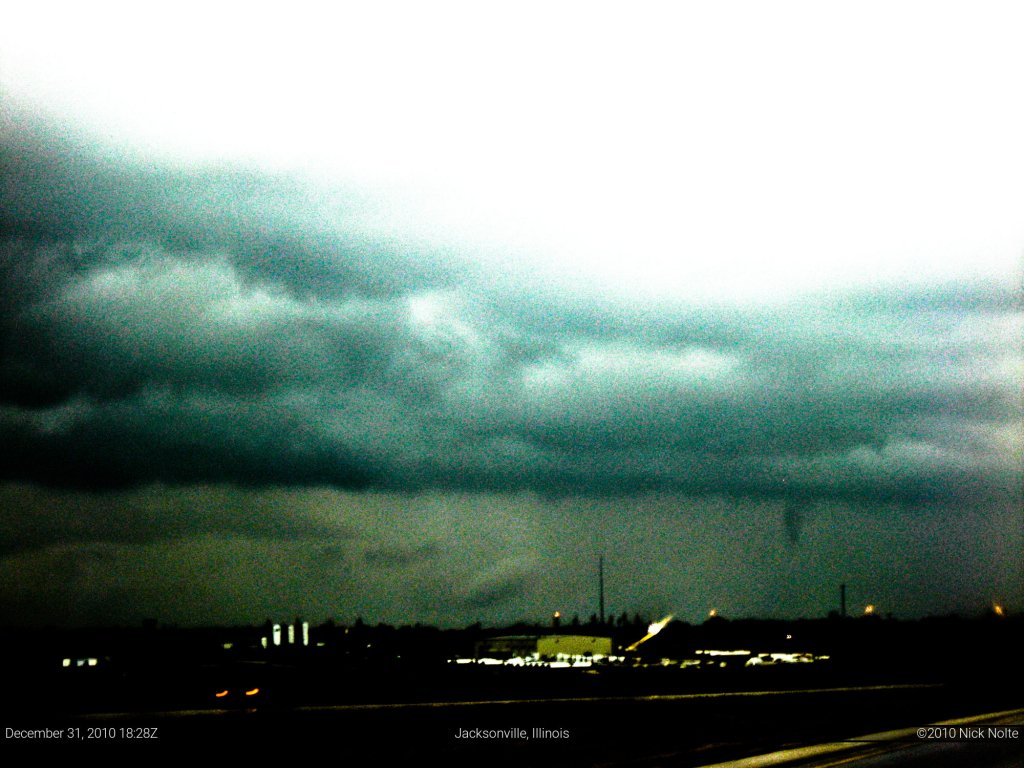 All in all, a fun day with interesting sights.  Also, how often does one chase on December 31st?  Happy New Year, and here’s to 2011! 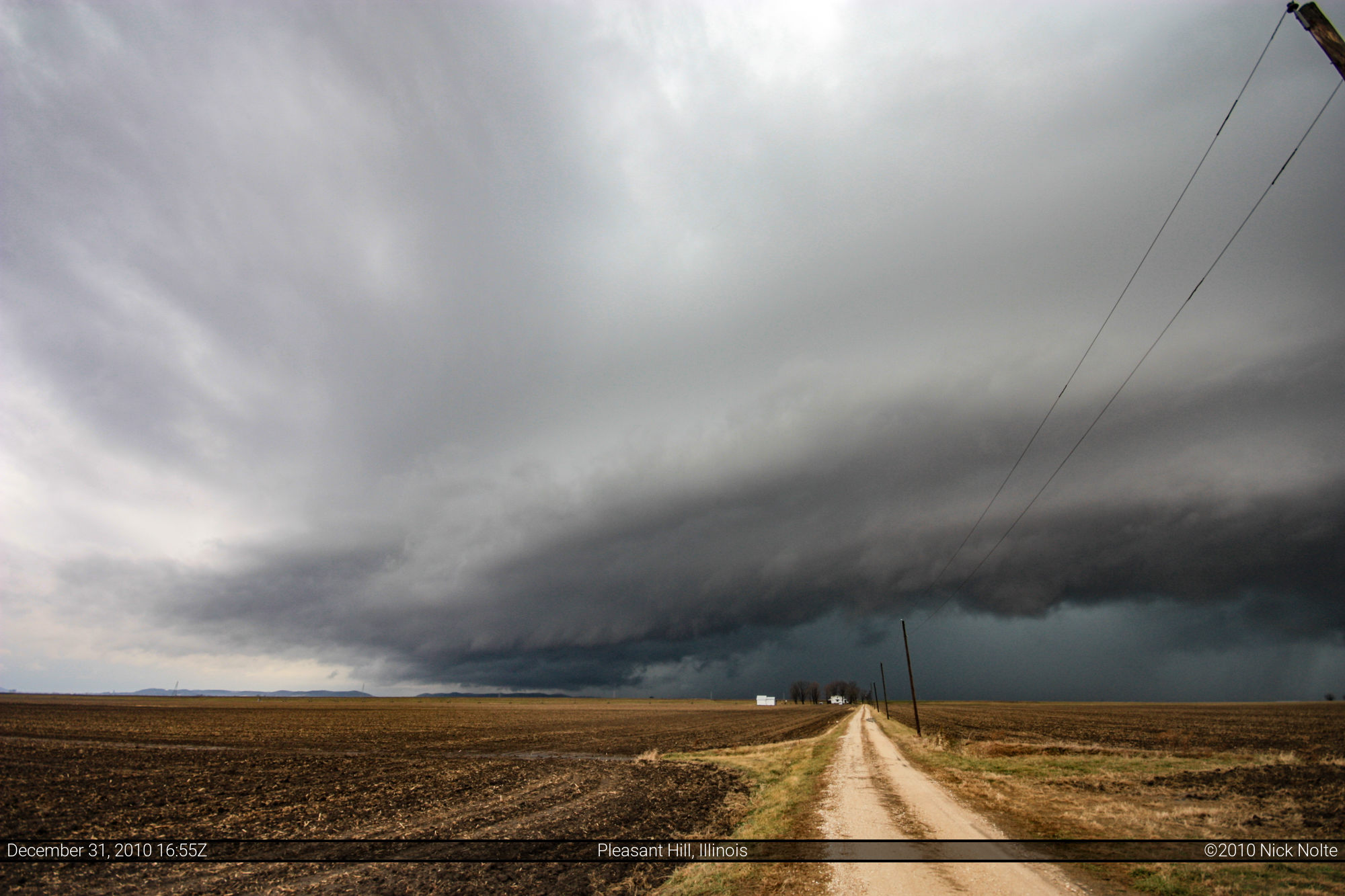