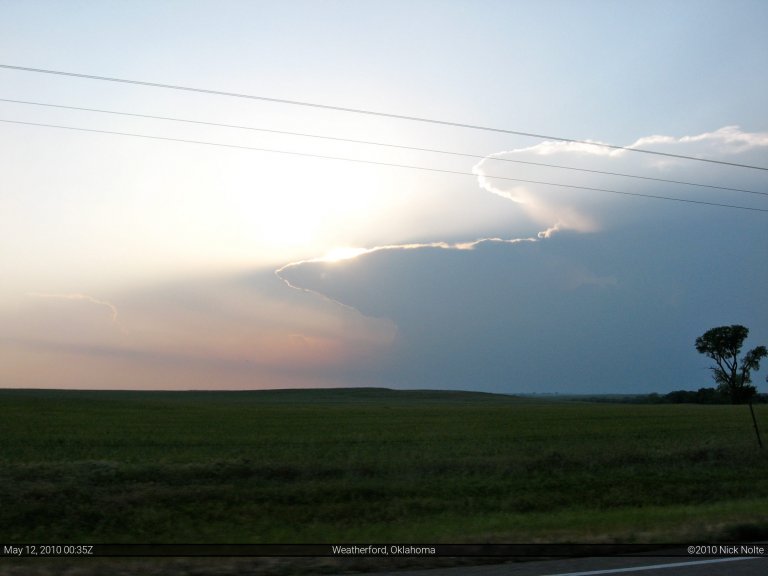 Figured the day before was as good as this trip was going to get.  They say the average chase success happens once every seven chases.  Today the initial chase target was Lawton, OK.  The forecast for the day had moist air advecting in quickly from the south bringing CAPE values in the area up to 4,000 J/Kg.  The big worry was the lack of lift from the dryline, but also a pretty stout capping inversion that might prevent storms from firing at all.  In hindsight, the warm front that was across the area was going to play further north than Lawton, providing the directional shear to fire up some nice supercells in the northwest part of the state.  Had I realized that earlier, I might have been in position for the Woodward storm later that day before it turned dark.

Was stationed in Perry, OK after the tornado outbreak Monday.  Left around 10:30am to head southwest towards Lawton.  Got to Lawton around 2pm CST.  Hung around town there in the Home Depot parking lot and got a religious talking to by a Hispanic gentlemen who approached me to inform me how he overcame a cocaine and heroine addiction.  Anyway, hung around there until 3pm CST watching the meager cumulus field do not much of anything.  I eventually convinced myself that the action would be further west and headed out of town.

At about 4:40 pulled off on a dirt road east of Altus, OK to check out the clouds for a bit.  There was a little bit of vertical motion, but not much so I continued west.  Hung out in the Wal-Mart parking lot at Altus watching the cumulus field to the northwest.  Eventually saw a storm developing and headed north towards it on OK-6 around 5:10pm.  Parked my car on a dirt road facing the storm at 5:48pm.  It had begun to die on radar, as well as another storm nearby.  They were struggling with the cap and their updrafts were getting choked off. 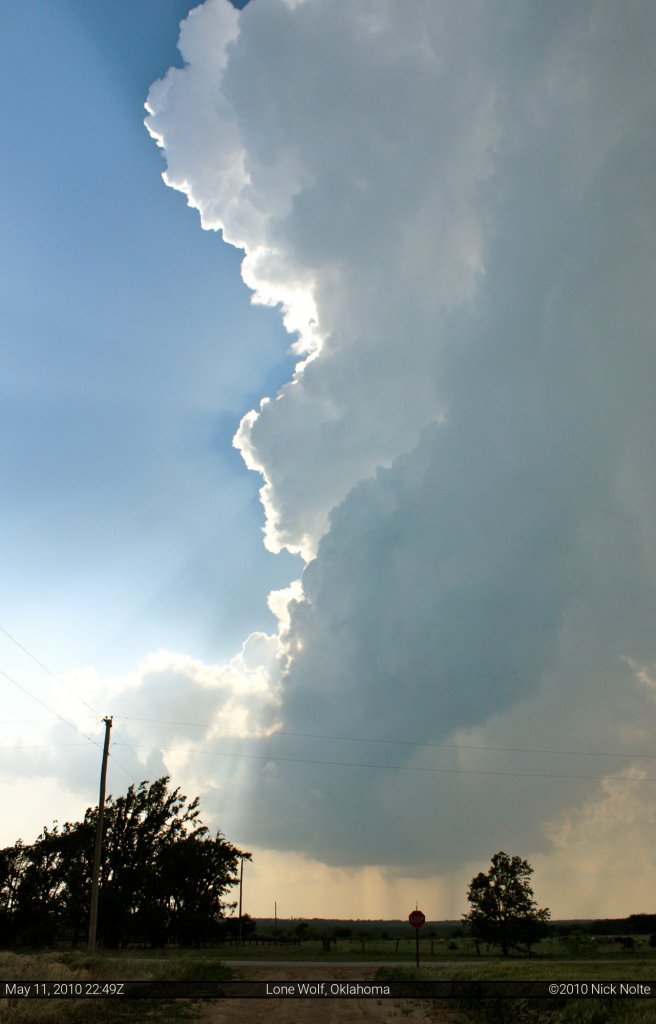 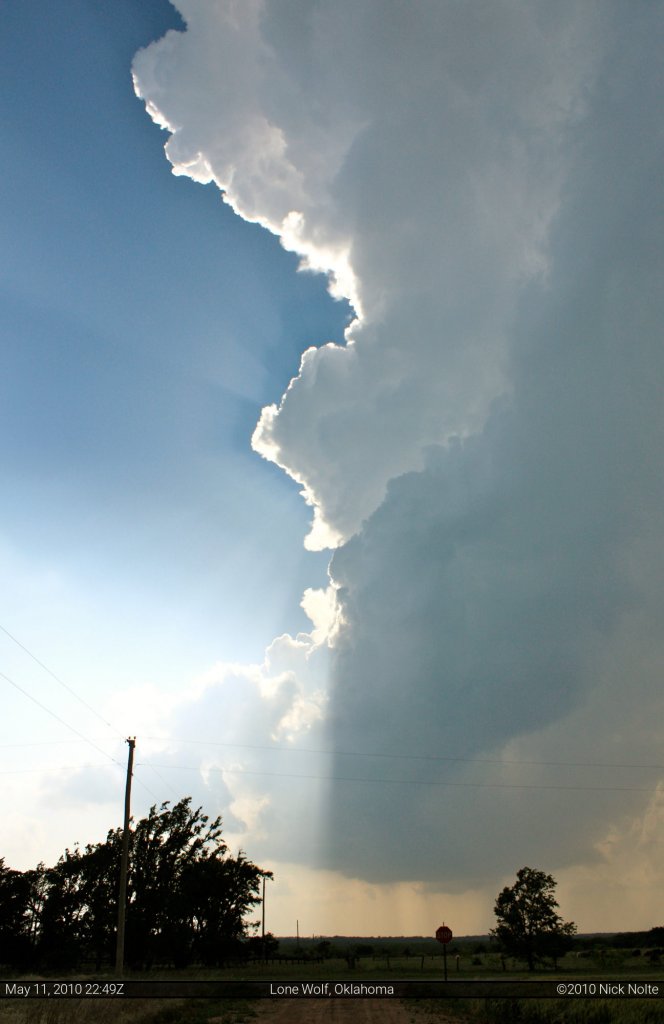 These are photos of the storm.  It looked really cool, but eventually the updraft was completely shut off, the anvil was orphaned and blown downstream from the cumulus tower.  The first 20 seconds of my 2010 video is a time lapse of the storm as I watched it from the road.  The quality is not great since it’s into the sun, but the motion is apparent.

After that storm died I continued north, ready to give up on the day and call it a cap bust, so I was headed back to Interstate 40.  My plan was to get back to Wichita, KS to be in position for the next day.  On the way I stopped at a convenience storm in Carter at around 6:40 to watch the sky for a bit.  Saw many other chasers stop in, most continued north.  I begun heading east on I-40 and it was at about 7:20 when the storm that would become the Woodward Cell began to show up on radar on the border between Ellis and Roger Mills counties.  So, as I got to Weatherford around 7:30 I turned north to try and track it down before dark. 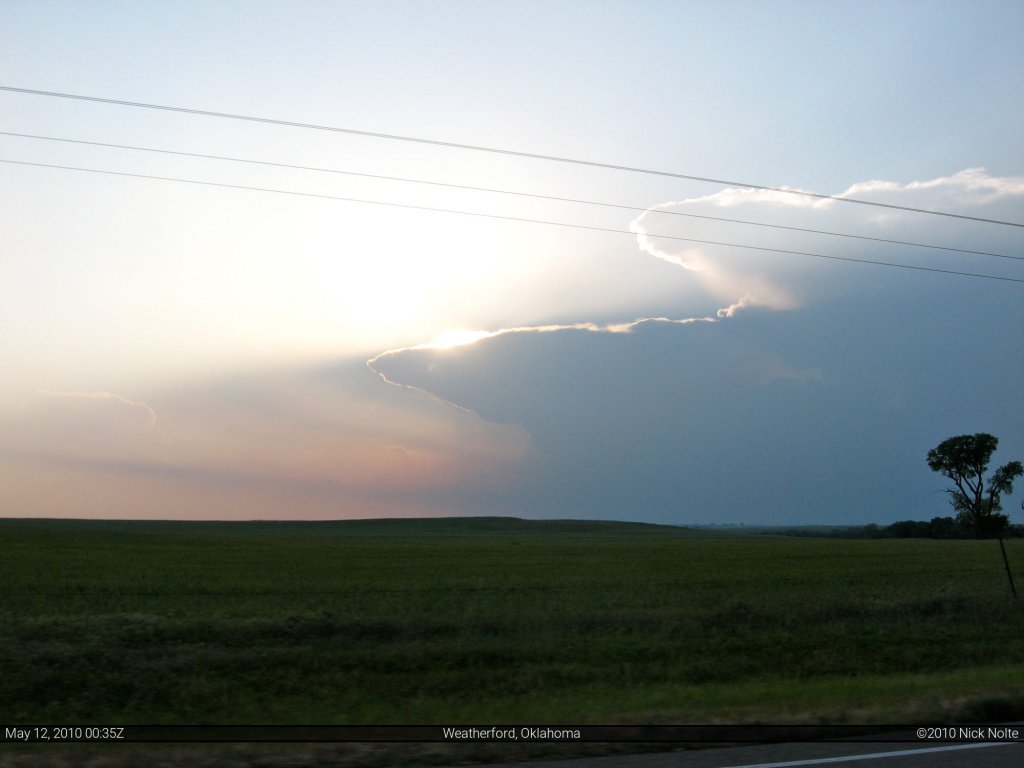 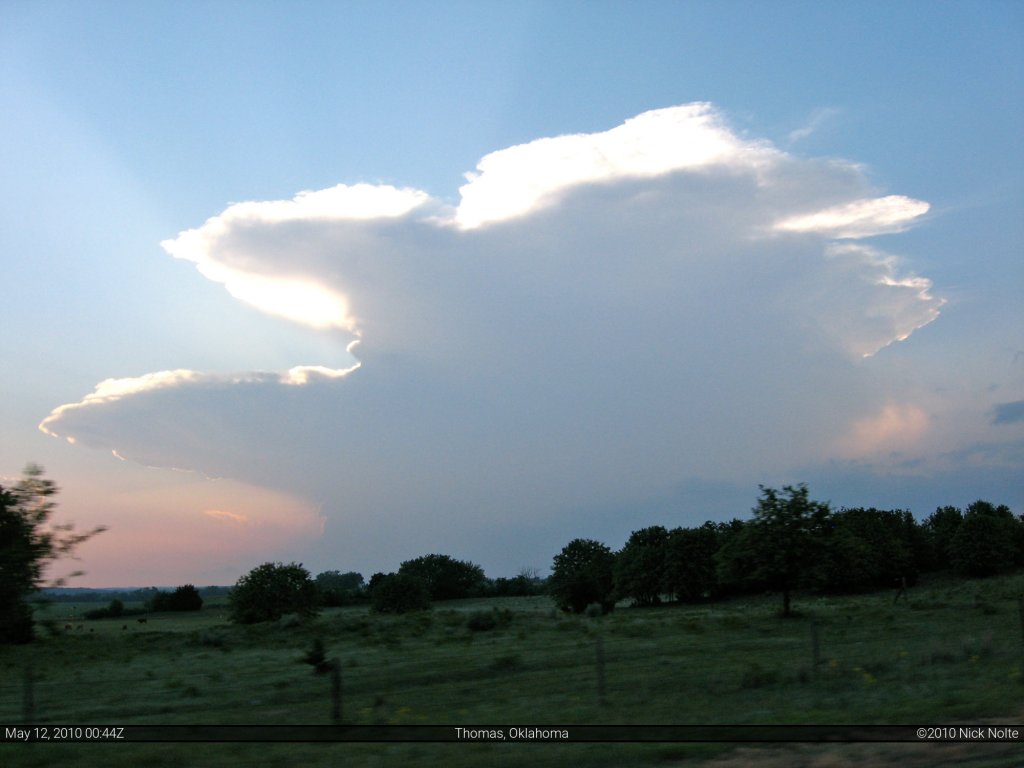 At 8:21 the National Weather Service in Norman, OK issued a Tornado Warning for the storm, I was still 30 miles southeast of the storm and dark was approaching.  Reports came in at 8:42 of a large funnel cloud, and a few minutes later of baseball size hail. 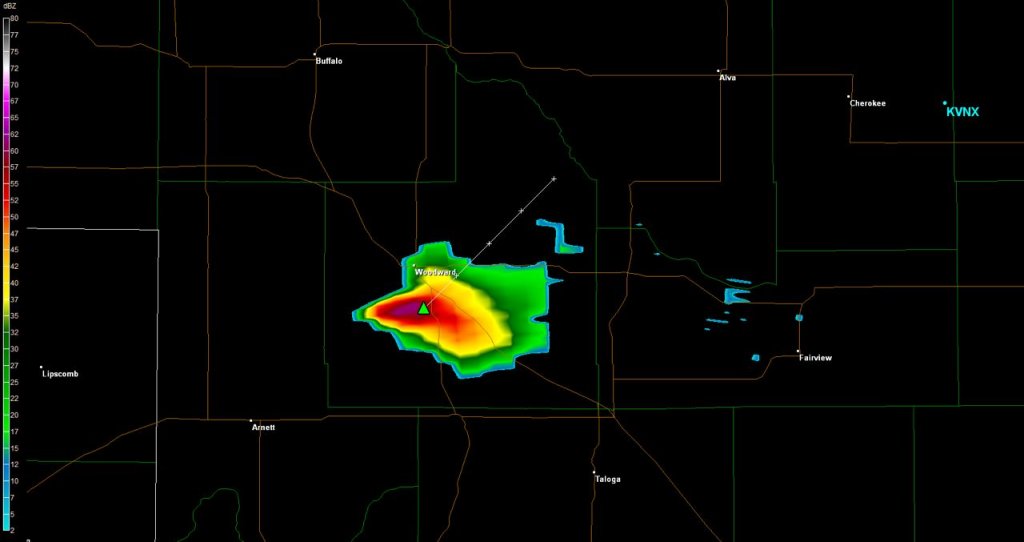 As I got into Woodward at 8:50, the sirens were going off and it was starting to get really dark. I had beat the storm to Woodward, but now was in the situation of it running me over.  I went west on US 412 to get on the other side of the storm so it would pass in front of me.  Accomplished that, but it was too dark to see anything.  Interestingly enough, there is no report of a tornado in the official storm reports for that day, so whether there was one or not, I’ll never know.

With darkness here, I headed east on US 412 and back to Wichita to prepare for the next day.  I arrived in Wichita, finally, at 12:37am, covering 702 miles on the day. 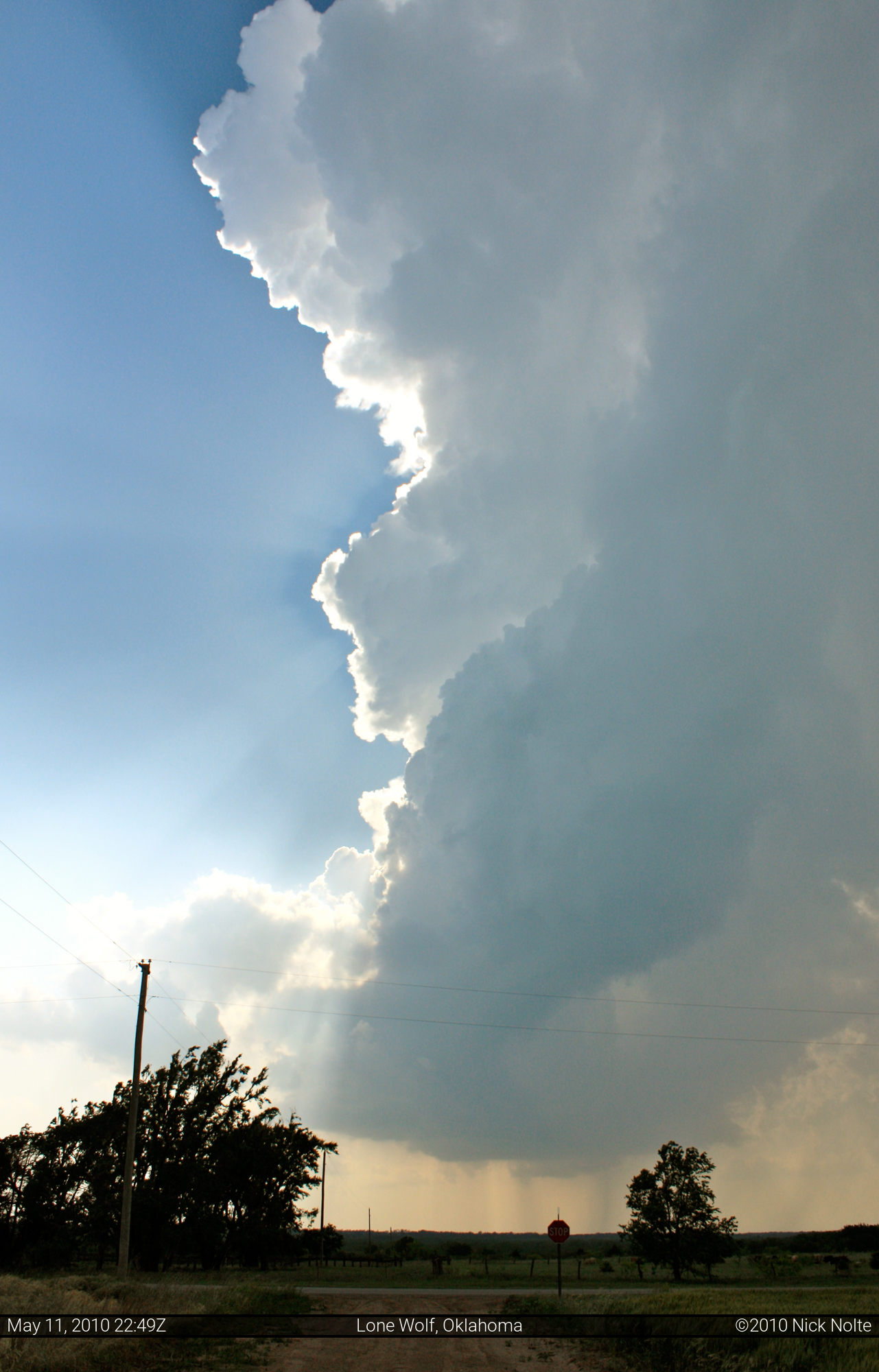