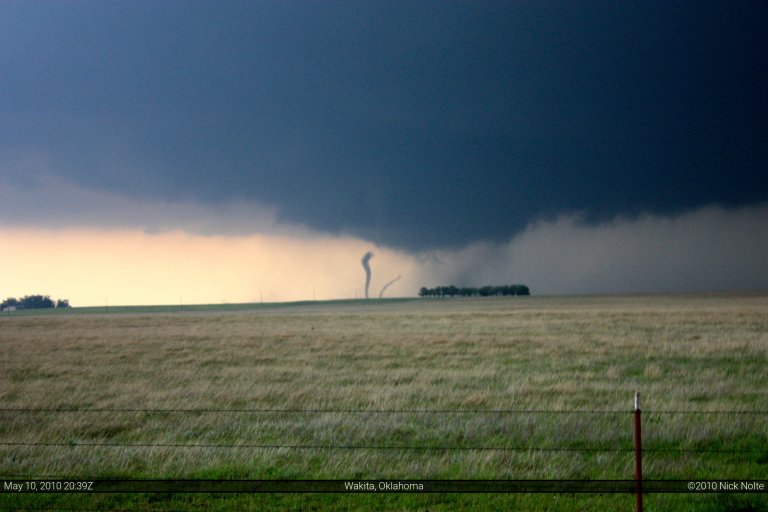 My chase vacation was originally scheduled to start May 6th, however for a couple of days everyone was talking about a huge severe weather outbreak at the beginning of the following week.  I decided to shift my vacation so I could jump right in on Monday the 10th.  I left Michigan on the 8th, spent the night in Iowa, then drove to Wichita, KS on the 9th.  My original chase target was Enid, OK, but I was tired of driving, wimped out and stayed in Wichita.

The 10th rolls around and the Storm Prediction Center had upgraded eastern Oklahoma to high risk.  Their outlook talked about strong, violent tornadoes being likely.  The weather in Wichita when I awoke was low 50s, the MCS from the night before left a cloud shield over much of the state and it was even foggy.  Concerned with the cloud cover hanging around leading to lower instability, I decided Wichita might be too far north, despite the SPC saying the clouds would clear rapidly and instability would skyrocket.

So, given the models, the ominous outlook by the Storm Prediction Center,  and the cloud cover in Kansas, I decided to head to my original target in Enid, OK.  I left Wichita at about 9:40am and shot down Interstate 35.  I arrived in Blackwell, OK around 11am and sat around looking at the satellite image.  After watching things for a half hour, I continued on and arrived in Enid at 12:30pm.  I grabbed some lunch and hung around town waiting for initiation.  I left Enid at around 1:30pm when I noticed some Cumulonimbus towers going up to my southwest. 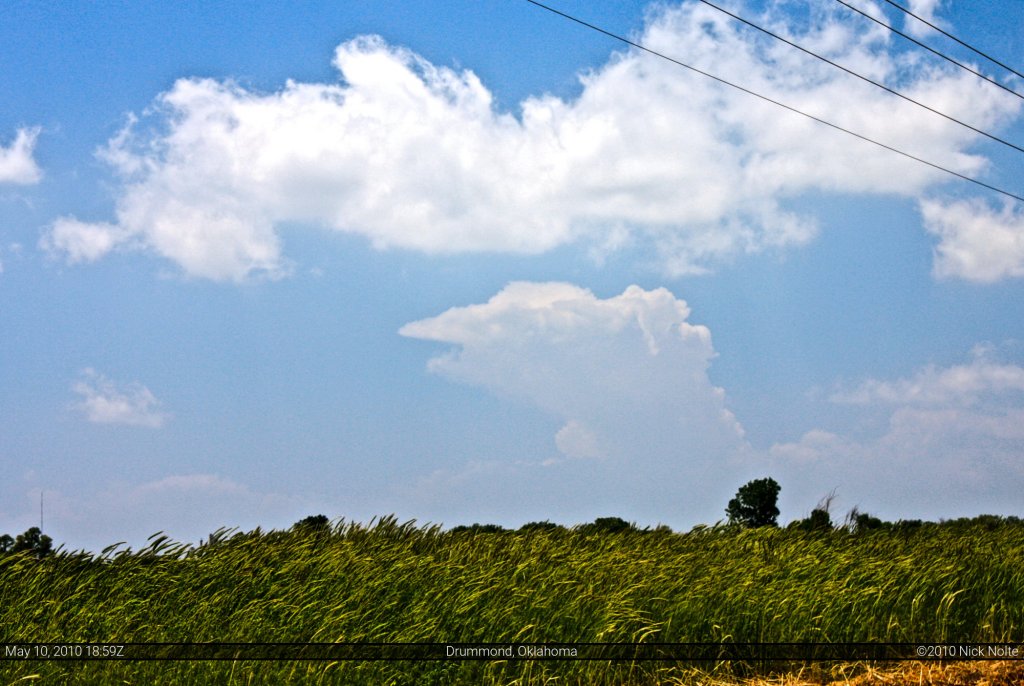 I took off after them, but it wasn’t long before I noticed these storms were struggling to get going.  Not long after I started chasing them, the storm that would become the Wakita storm began showing up on radar at 1:50pm.  I decided to drop off these southwest storms and start heading north immediately.  Shortly after forming, the storm split and produced left and right moving supercells.  I decided to go after the right mover and headed north on OK-132.

At about 3:30 I turned east on OK-11 and got in front of the storm, as well as passing about 50 other chasers, and turned north on OK-11a towards Wakita.  I pulled off the road about a mile north of OK-11 and just to my west I could see the rapidly rotating wall cloud, and not soon after the funnel began to drop.  Here are the photos I snapped.  While standing here watching the tornado develop and dance around, the inflow winds rocketing into the storm was at least 60 mph if not faster.  I couldn’t open my car door at one point and it was difficult to stand.

This is a multi-vortex tornado, the last few photos show it really well.  The entire lowering above the stand of trees is the main tornado, and the little tornadoes within it are individual suction vortices.  At about 4:43 I decided it was time to get out of there and start heading east again as this storm was moving about 55 mph.  I followed the Grant County Sheriff as he pulled onto OK-11 and headed east.  As we waited to turn left the rain and wind from the storm core started to graze us, but the tornado was going to pass well to the north.

Here is the radar image from Vance Air Force base (which is the hollow black circle at the bottom left) at 3:45pm.  The circular orange area just southeast of the purple areas of the storm is the hook echo of a classic supercell.  This is where the tornado it has just crossed OK-11 about two miles west of the road I was on. 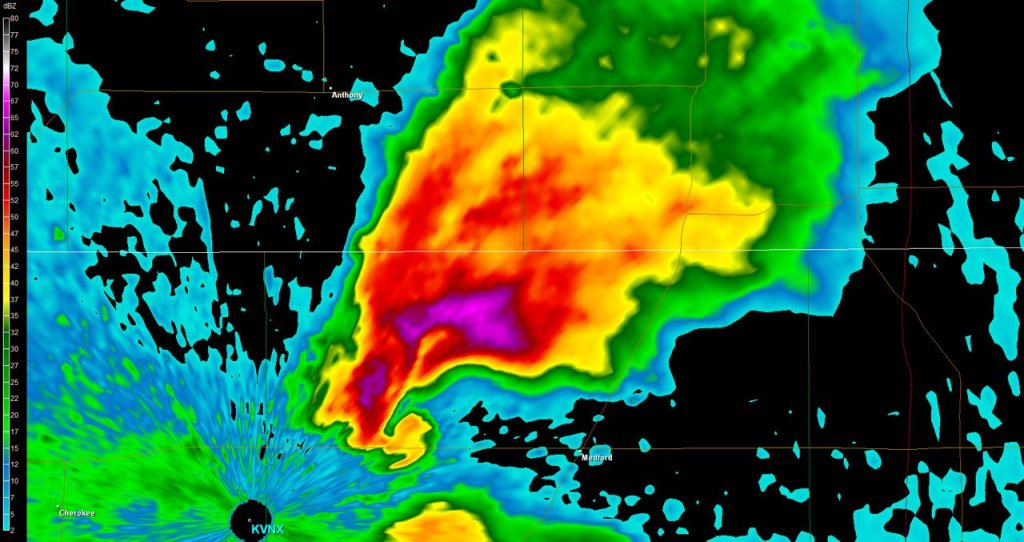 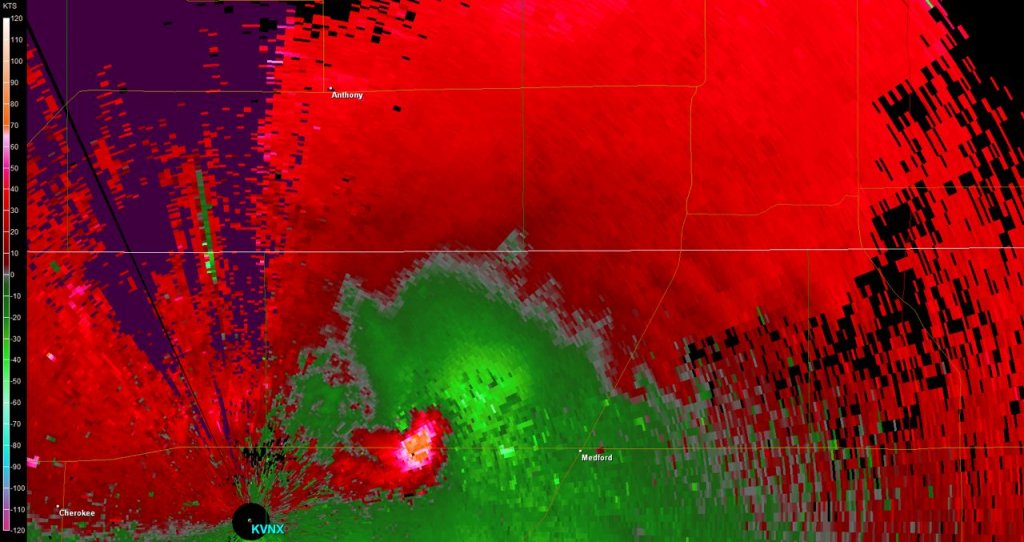 This storm went on to the east at 55mph and passed to the north of Medford, which is labelled in the image.  The tornado it dropped in this area was rated EF-3.  After this, the storm transitioned to high precipitation and it was hard to see anything.  Since I couldn’t keep up with it,  I kept heading east and hooked back up with Interstate 35 and drove south and decided to try and catch up to the storms that were heading towards Ponca City.  This was an unsuccessful venture as the road network in northeastern Oklahoma is less than optimal, and the main road (US-177) goes through an Indian Reservation, and it’s the only paved road.  Since the storms were moving 60mph I decided to call it a day and headed back to Perry, OK.