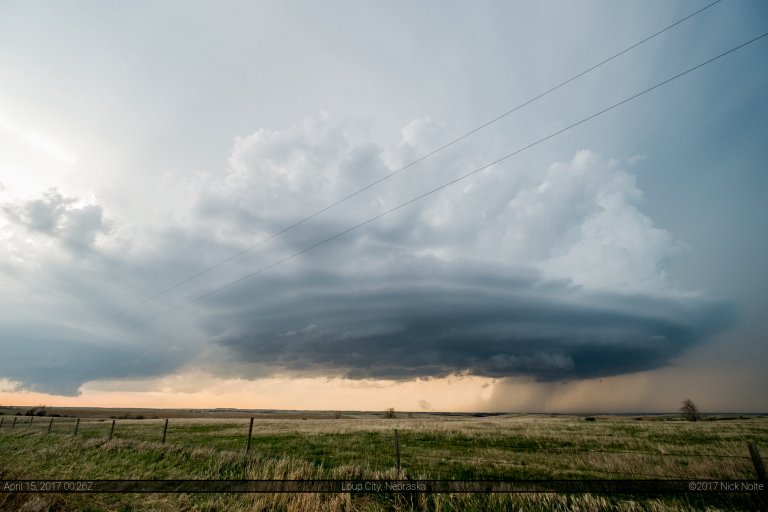 Generally westerly flow aloft as a trough edged in from the Pacific Northwest while at the surface a surface low was progged to develop in NE Colorado and drift eastward while a dryline extended south through Western Kansas into New Mexico. SPC had outlined a slight risk along the dryline from Kansas south along the Texas/New Mexico border. Marginal tornado probabilities extended along the same region as well as a bit into Nebraska closer to the low.

I was interested in the play along the nose of the low pressure as I expected capping to be an issue elsewhere in Nebraska. My plan was to take off from work a little early and head to Holdrege. I left Grand Island shortly after 21z and began the trek down I-80. SPC had issued a mesoscale discussion for my target area mainly expecting hail and wind, with bulk shear values hovering around 30 knots, they were expecting multi-cellular development with some possibility for isolated supercellular structure.

I got off the interstate at Elm Creek to sit and observe data. No watch had been issued yet but there were a couple areas of interest, cumulus fields to my north and south. Oh good, I was going to have to pick one of these soon.

I drifted southwest because I thought the cumulus in the southern patch looked a little more robust so I parked on a dead-end dirt road by the Platte River about 7 miles southwest of Elm Creek to watch what was going on. Development was definitely going on to the southwest. 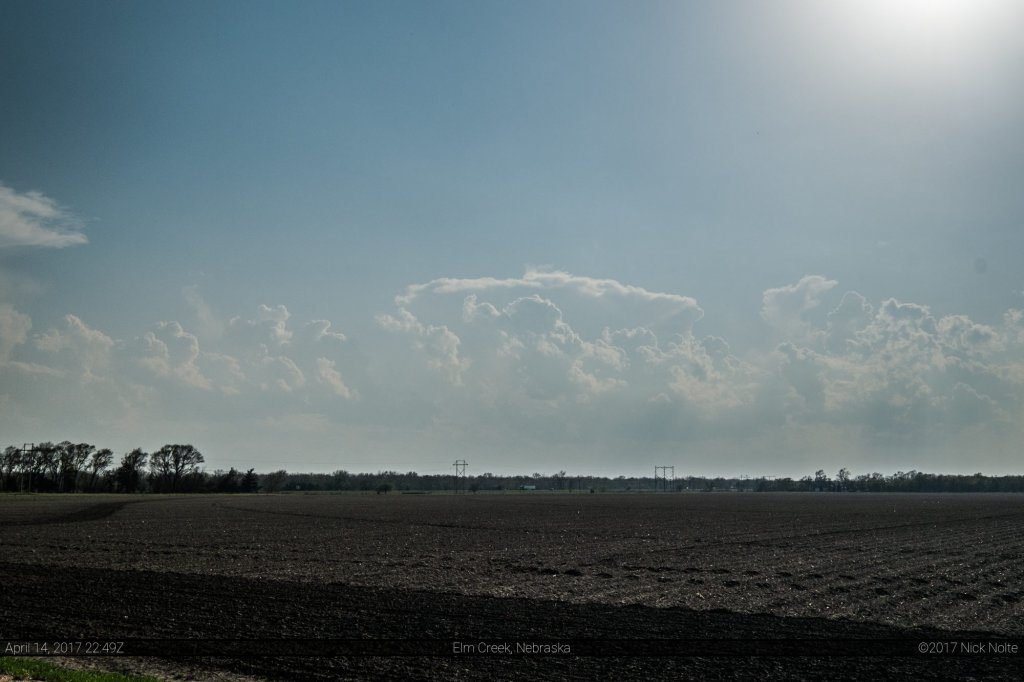 This was what the first blip on the radar looked like and it continued to struggle from here. Meanwhile, to my northwest it looked a little more interesting. 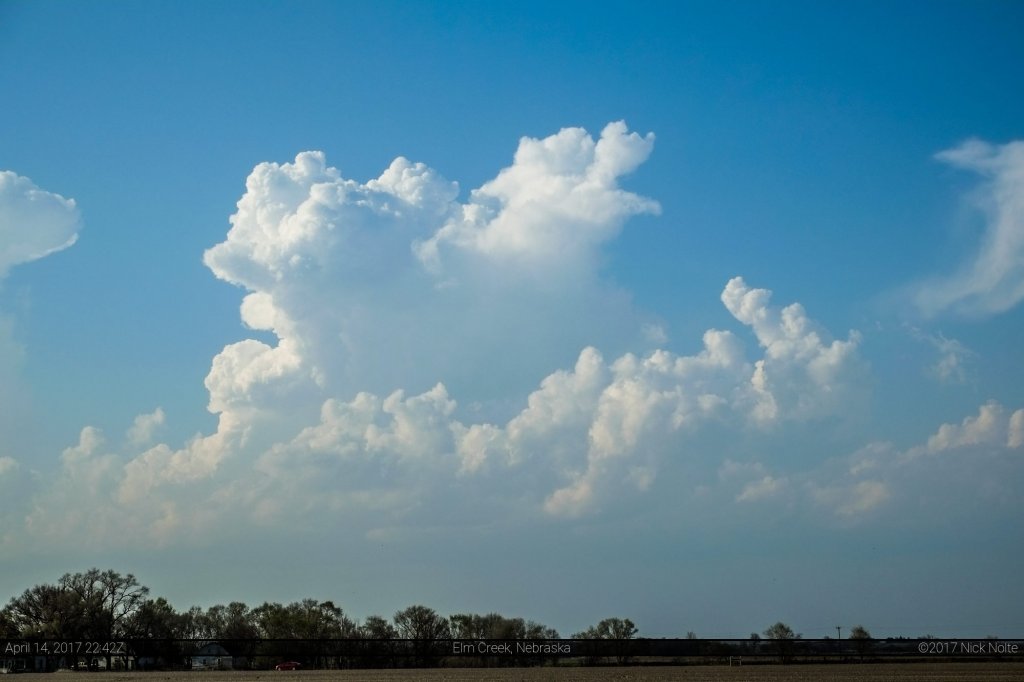 The cells to my southwest continued to struggle and ultimately I decided to head north, but not before taking one last photo of the struggling storm. 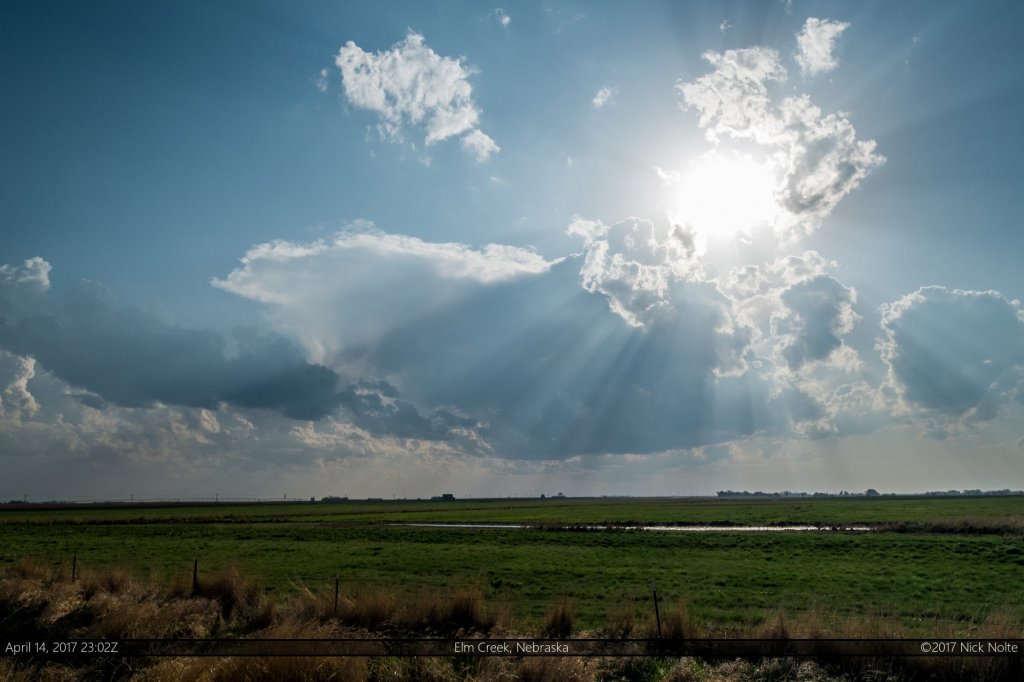 I drove north and stopped just south of Miller to keep an eye on both sets of cells again as their radar presentation wasn’t really improving on either target.

Eventually the southern cell continued to struggle while the northern cell finally started to get organized and present much better on radar. I drove east and north through Pleasanton to intercept what was the main cell now. As I approached it just after 0z it exhibited a decent wall cloud. 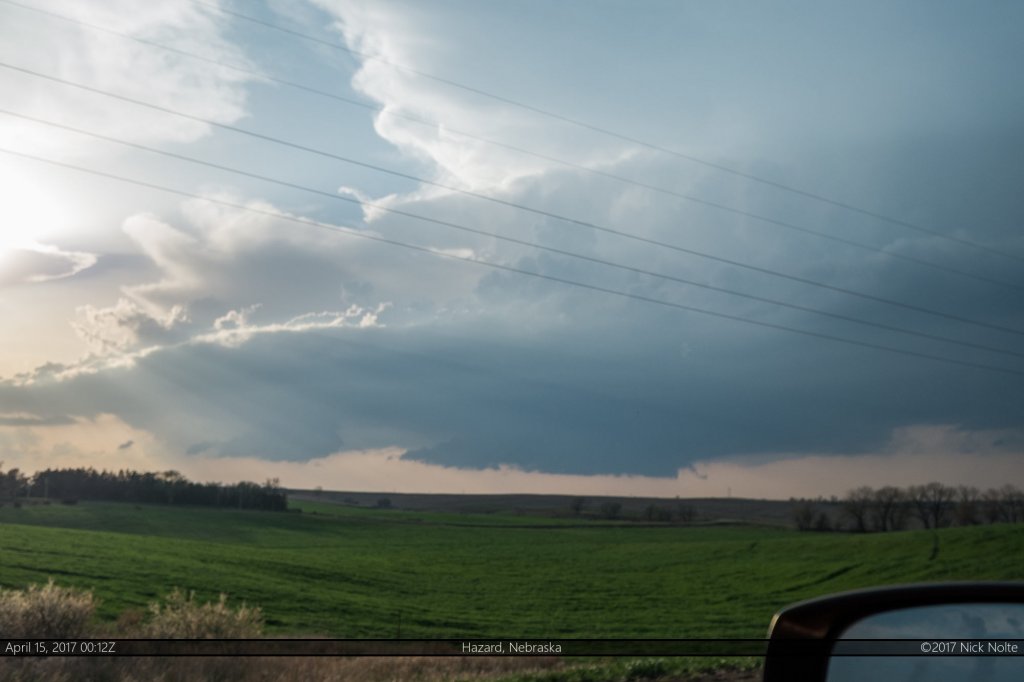 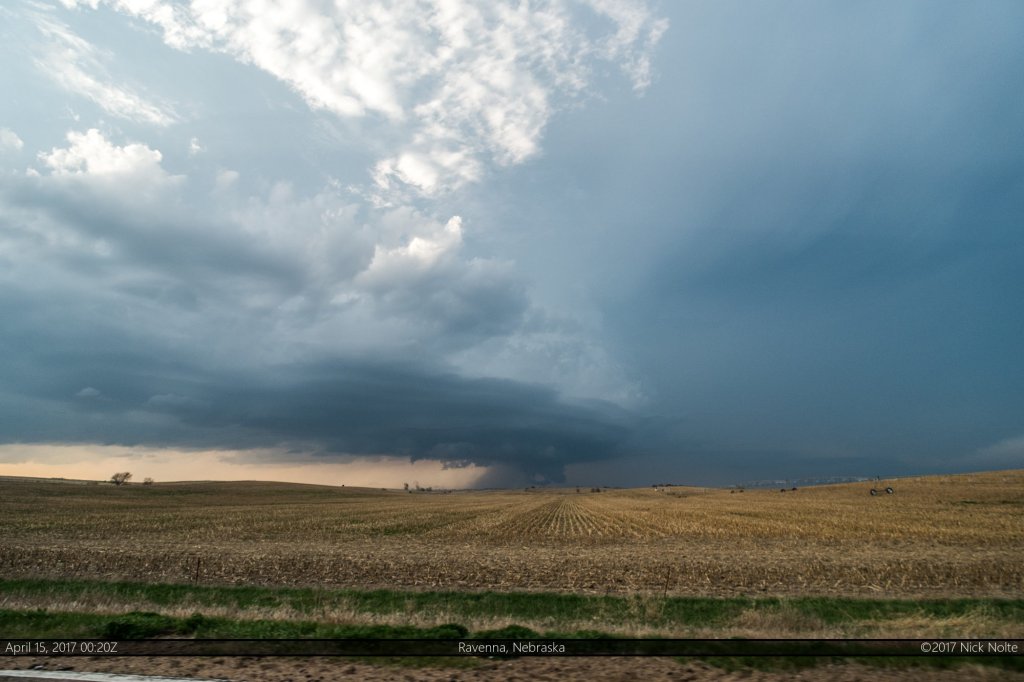 Alas, this would be about as good as it would get for low level rotation as the wall cloud eventually dissipated. However, although the wall cloud was mostly gone, the structure of the storm really started to ramp up and became very nicely striated as it continued to the northeast. It was about this time the storm started to drop golf ball sized hail. 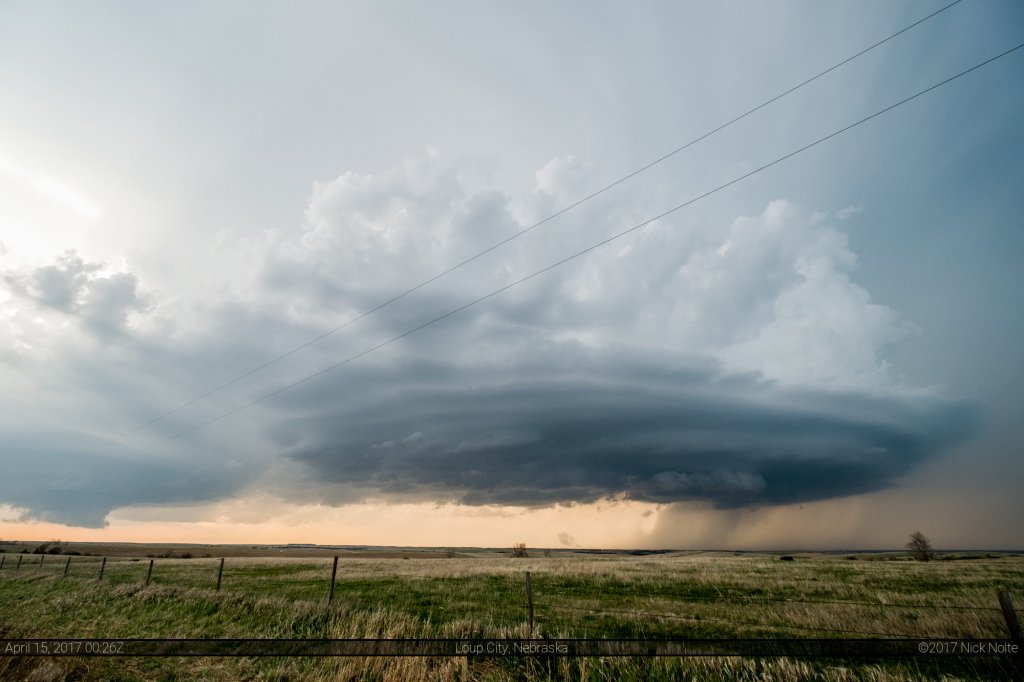 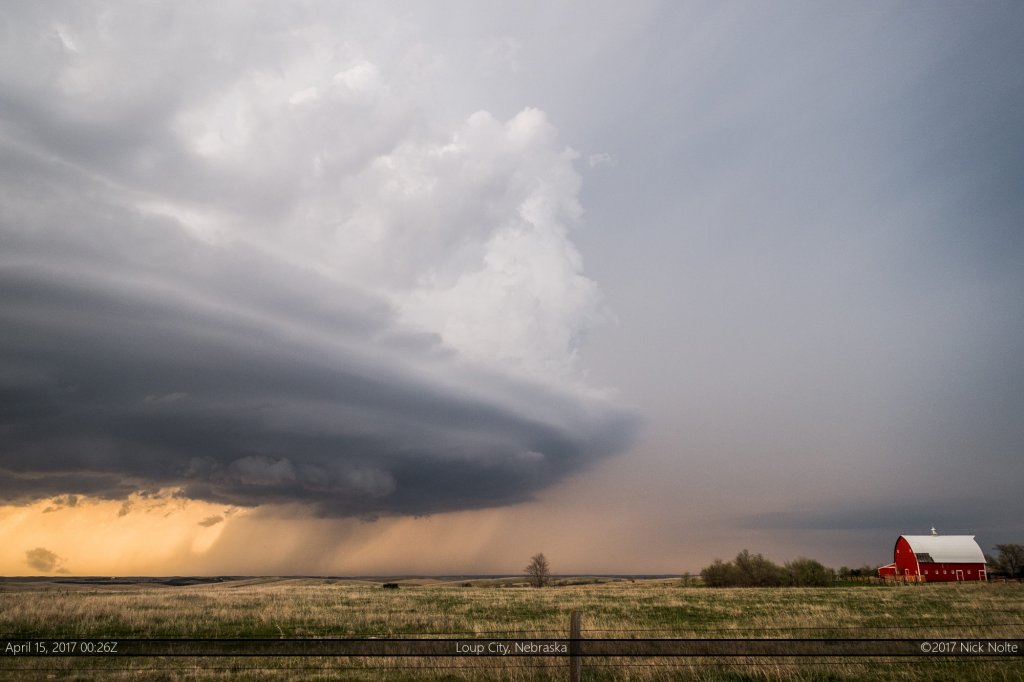 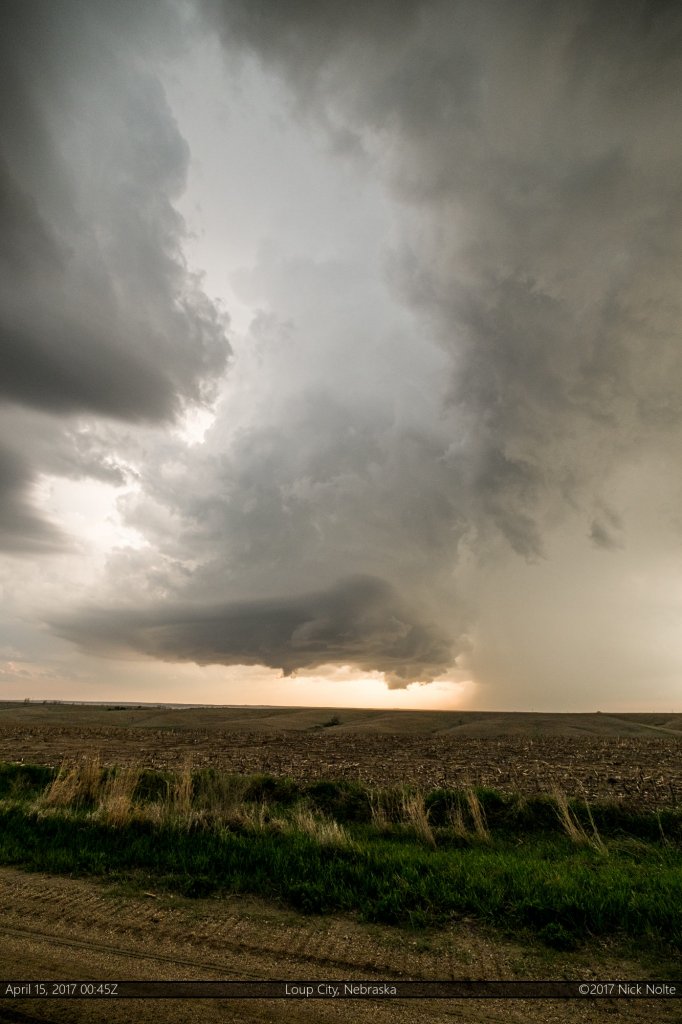 After this, dusk settled in and it started to get dark so I called the chase and began the trek back home. This storm would continue through Broken Bow after dark where it dropped hail over 2″ in diameter. 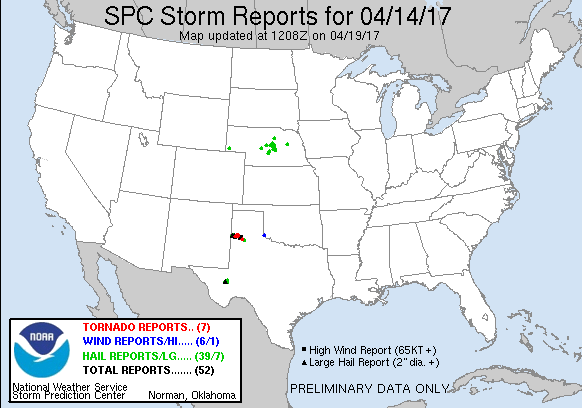