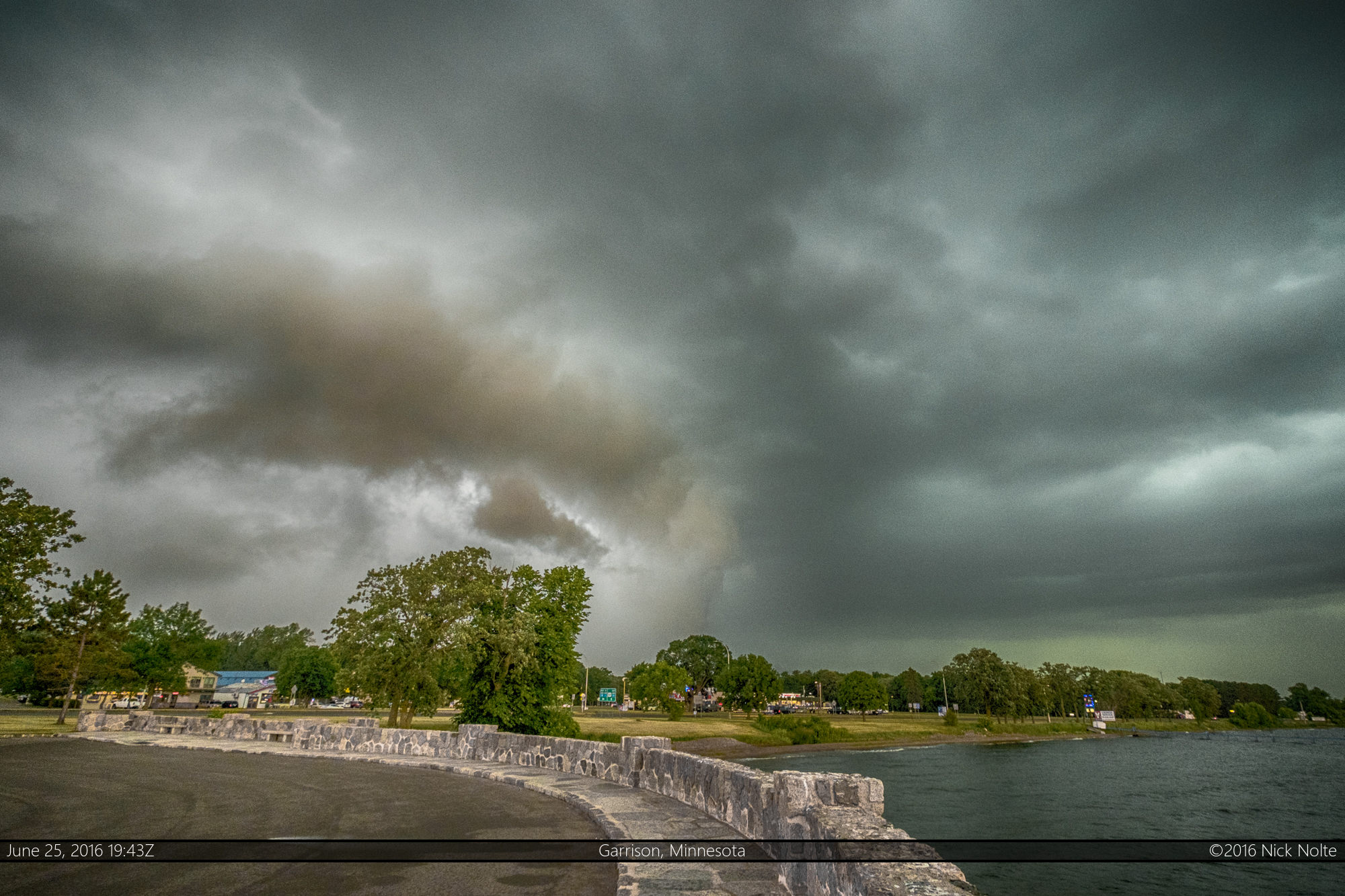 June 25th was the final day in a four day stretch of roaming the Upper Midwest and Northern Plains. My goal was to hopefully find a decent storm north of the Minneapolis metro area after the previous two days in the Dakotas were complete busts (although I did get some sweet landscape art).

The SPC had an enhanced risk out for Eastern Minnesota and Northwestern Wisconsin with 5% tornado probabilities there. A strong upper level low was spinning away in Saskatchewan was translating eastward dragging a pretty strong trough with it into the target area while at the surface a low moved from South Dakota into Northern Minnesota. With dewpoints expected into the 70s, an unstable airmass would overspread much of Minnesota. Initial storms should be supercellular in nature but quickly grow upscale over time.

I left Fargo shortly after 10am and moseyed east along US 10 as I expected the play to be north of the I-94 corridor. Around 18z the SPC issued a mesoscale discussion for the area indicating a watch was very likely. I pulled into Baxter at 1830z and parked at the Costco there along highway 371, but my time there was short lived as I could see off to my south an exploding storm beginning to take shape.

As the developing storm tracked overhead I followed along through Baxter and Brainerd and back into the countryside as the SPC issued the tornado watch for the area. I made an error in navigation by taking highway 210 out of Brainerd instead of highway 18. I originally estimated the storm would head towards Aitkin, but a more easterly component meant that I would be out of position to the north.

I did finally cut south on county highway 28 west of Aitkin and drove through the forward flank of the storm to reach US 169 north of Mille Lacs Lake. It looked like I might have an opportunity to intercept the storm at Garrison before it crossed the lake so I drove down and attempted to beat it to the lakeshore.

I did manage to make it through the forward flank and get to Garrison before what appeared to be a decent hook developing on radar approached the lake. I drove a little west to poke in and try and get a visual on any features but trees and hills made this impossible.

I drove back to Garrison and pulled into a park on the northwestern shore of Mille Lacs Lake and waited for the storm to overtake me.

It did exhibit a decent shelf followed by some rather strong winds, but the system was growing upscale by this point and the chase was mostly over. I did get to the other side of the lake and track along the storm to McGregor, but by this time it was mostly grungy and featureless.

I did drive back to the eastern shore of the lake to catch new development, but it was clear the system was going linear and at this point I started back east towards I-35 to begin the trek home.