After an uneventful day on the 2nd, Williamson and myself found ourselves awaking in Grand Island, Nebraska to a promising outlook for severe weather. The stage was set for unsettled weather across Nebraska characterized by an unstable atmosphere and a favorably placed warm front. A low pressure migrating along a warm front from Wyoming to Nebraska would be the focal point for severe weather. A southerly low level jet of 40 to 50 knots was expected to overspread the target area while surface temperatures reached the upper 80s, dewpoints into the upper 60s which would promote a heavily buoyant atmosphere marked by surface based CAPE values exceeding 4,000 J/Kg. Hodographs also indicated a strongly veered wind profile throughout the atmosphere and bulk shear values of 60 to 70 knots.

The Storm Prediction Center had issued a moderate risk, highlighting an area of 10% hatched probabilities for tornadoes across northern and eastern Nebraska. Jon and I felt pretty good about where we decided to stay last night and made Grand Island our staging area for the day. We met up with several other chasers near I-80 just south of town where many had gathered to wait and see what the day would bring.

Despite a bubbling cumulus field nearby, concerns about the cap began to enter my mind as the clock rolled around to 19z with no sign of new development in the warm sector. Concerns about the ongoing MCS to the north interfering with the days setup also cropped up as outflow boundaries from those storms surged south towards our location. North Platte released a special 18z sounding which showed a pretty decent capping inversion still present, but otherwise the thermal profile was outstanding with 3,700 J/Kg of SBCAPE. The hodograph was also rather amazing indicating 327 and 591 J/Kg of 0-1km and 0-3km storm relative helicity, respectively.

Eventually, we started to head west on I-80 and as we approached Lexington, storms began to fire north of the well defined outflow boundary running across Hooker, Thomas and Custer counties. We pulled off to analyze the current situation and decided to head back east on I-80 then north on US 183 towards Ansley. We were still hoping for cells to fire on or south of that outflow boundary. Parameters were very high in the warm sector, south of the outflow boundaries where mesoanalysis had significant tornado parameter maxed out, surface based cape over 5,000 and the high storm relative helicity values.

A couple of small cells were about to cross our path as we continued north but they fizzled out, additional evidence that the cap might win in the warm sector as updrafts struggled to stay alive. Cells continued to fire near Oconto, only to die a few scans later as they moved northeast. We followed one of these for a bit until Loup City where we stopped, the storm fizzled, and now we were waiting again. Meanwhile, a large, tornado warned HP supercell to our north was ongoing and was enticing us in that direction, but we held our ground as it looked very high precipitation and we figured any intercept would be extremely difficult and decided to stay and hope for a play in the warm sector.

Shortly after 22z an isolated cell exploded south of Lincoln so we left Loup City and made our way towards Oconto for an intercept. By that time the storm had become an amorphous blob with a well defined hail core and it looked as such in the field. No well defined features and very ragged edges. 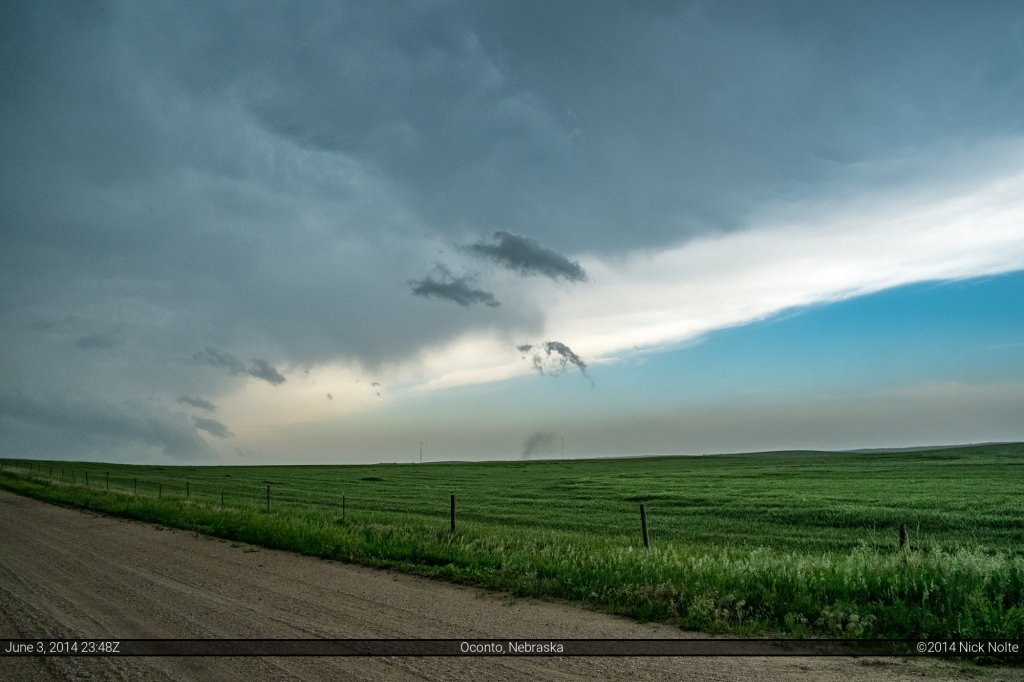 We let the storm roll by and called the chase shortly before 1z and made our way to Kearney for the night. I would consider this chase a bust, especially given the forecast and insane parameters. The storms in Eastern Nebraska did end up doing quite a bit of damage from hail and wind, tons of reports of baseball size hail and even a few 4.25″ hail reports near Kennard, Bayard and Minatare. A few tornado reports came in with the HP cell north of the front, but I suspect a lot of those were gustnado type events. 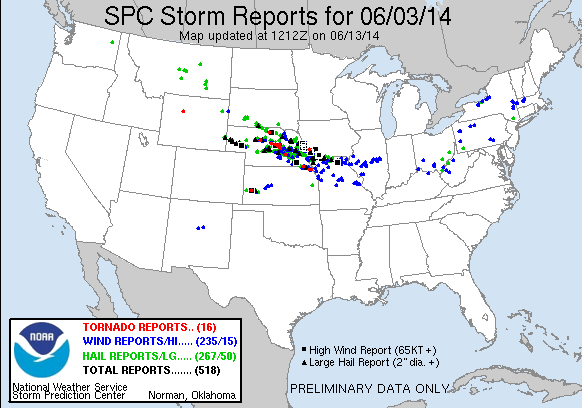 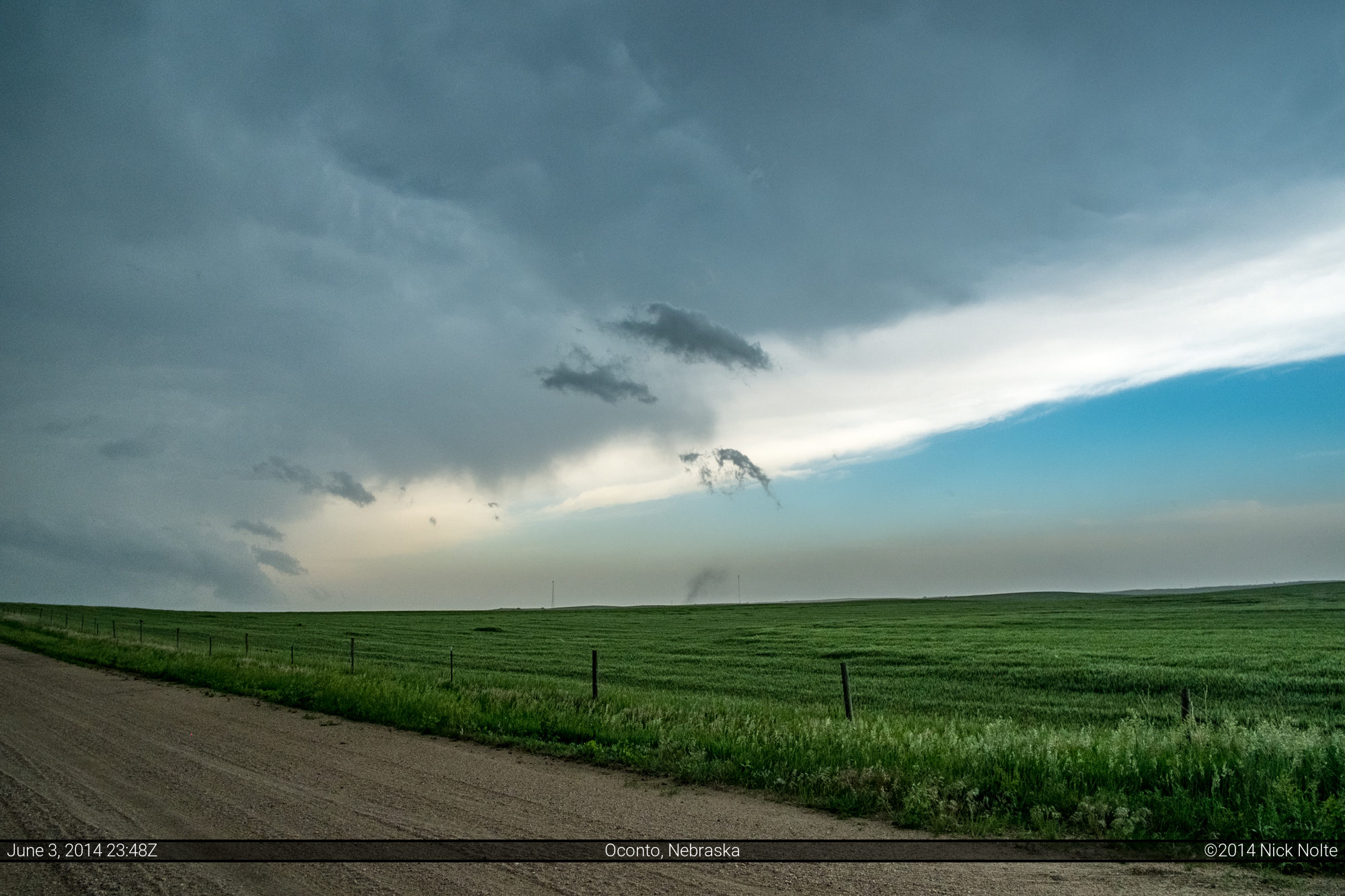