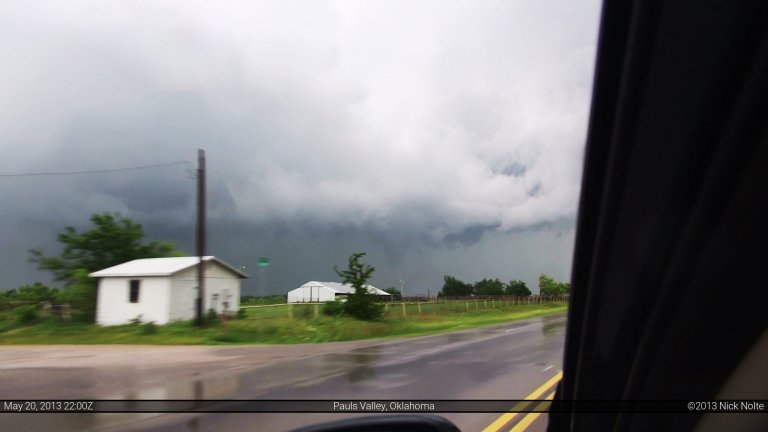 Today was the final chase day of a four day excursion which included some beautiful tornadoes near Rozel followed by a couple frustrating chase days.  The 19th proved to be a rough day as we may have squeaked out two tornadoes, but nothing terribly photogenic. We awoke the day in Okmulgee after the hairy chase the prior day and knew we were probably going to be heading southwest towards OKC, maybe even south of there. We took off from Okmulgee just before noon and made the trek westward on I-40.

We stopped, briefly in Purcell and took note of the boundary that appeared on visible satellite across OKC metro area and noted that we probably should keep an eye on that and not stray too far. 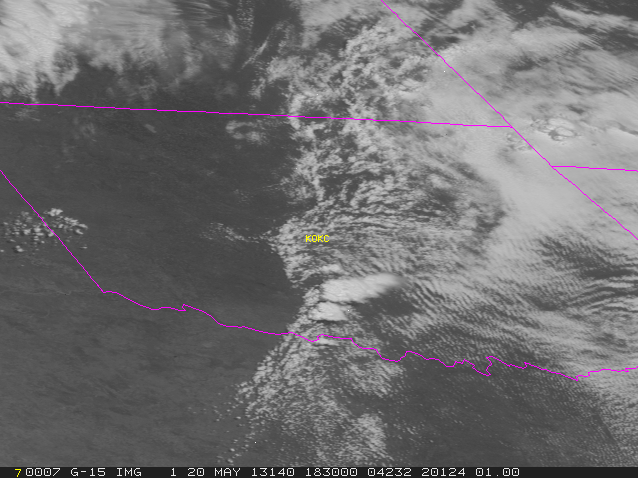 Of course, it was about this time a storm fired near Pauls Valley to our south and we figured we could go give it a look while not straying too far from the boundary near Metro. So we sauntered on down to near Lindsay to check it out. We missed the fact that the towers that would become the Moore storm were starting to go up behind us. Nevertheless, we stopped near Lindsay to take a look at our sucker storm, and it looked anemic to say the least. It was shortly after this Jonathan pointed out the current reflectivity of the storm going on over Moore

Well, shit. We kind of blew that. We stood there for a minute in disbelief at the insane hook on the storm to the north. Realizing we were over 40 miles out from it with no chance of getting there in time, we accepted defeat this time and turned out attention back to the storms we were on wondering if a similar fate was in store for them. As our storms petered out we headed south to intercept the beefy storm near Duncan. We stopped on a hill east of Lake Fuqua to watch the storm and a couple of tornado reports had come in on it but we couldn’t see much from our vantage point. 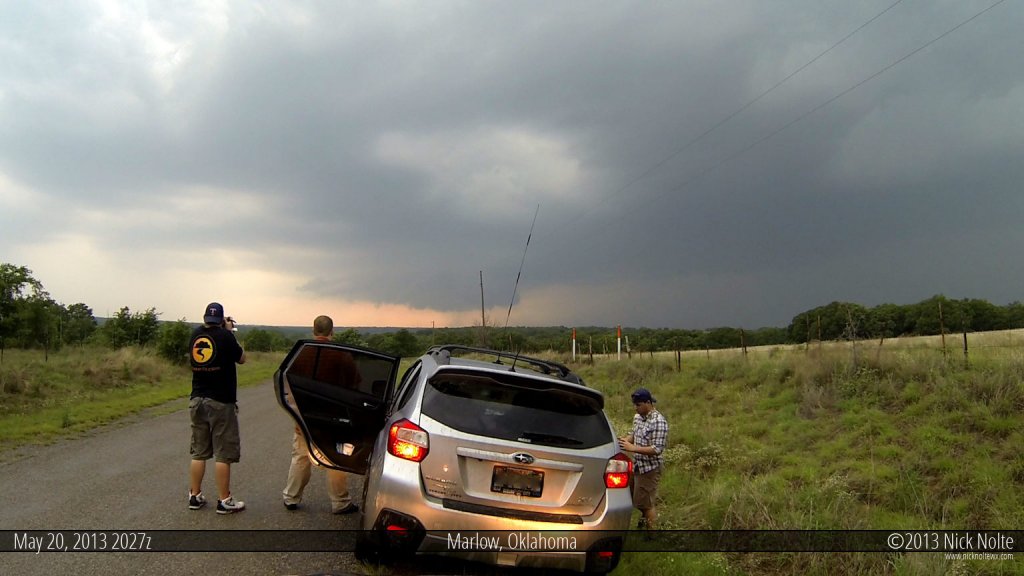 After watching this storm for a bit amidst a lightning barrage, we headed back north to OK-29 to move east and keep up with the storm hoping it might get its act together, eventually. Just before 22z, the storm seemed to be developing a hook and a couple of funnel cloud reports came in, followed by a tornado report. Whether or not this is the actual tornado is up for debate since I could never see the ground. 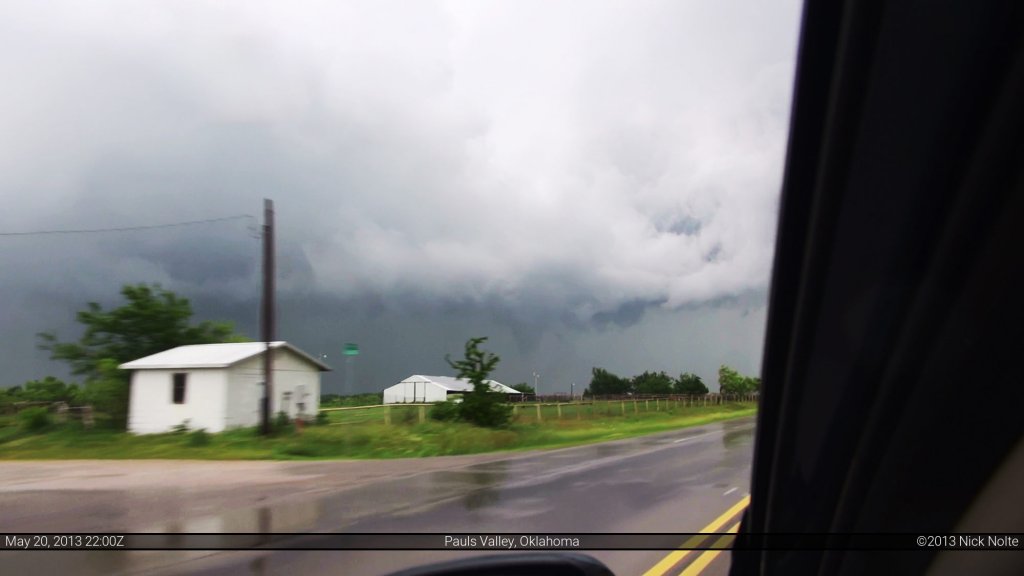 We continued to keep up with it, but it started to fall apart near Stratford and it was at this time we ran into Adam Lucio, Danny Neal, Joe Pudlik and Alec Scholten and we all called it a chase and drove to Shawnee for dinner where we got to hear their Moore story as they were on the storm earlier in the day. As we walked into the Chili’s the atmosphere turned a bit somber as the televisions were all displaying the destruction in Moore. This was the first we had seen or heard of the damage.

After dinner, we were treated to an impressive mammatus display outside the restaurant as we chatted before heading out separate ways home. 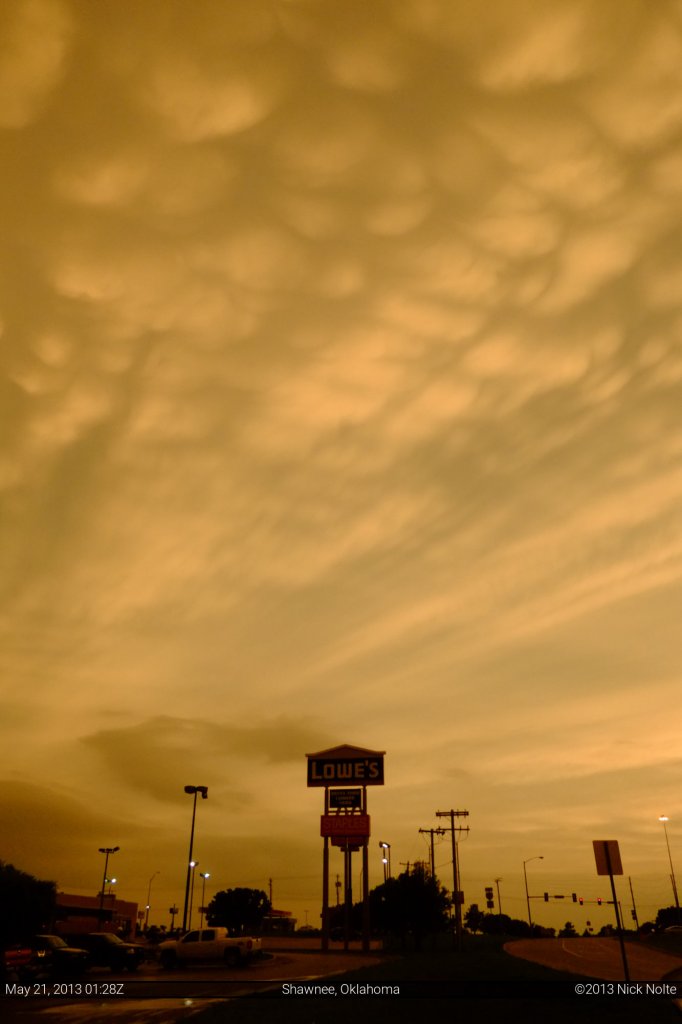