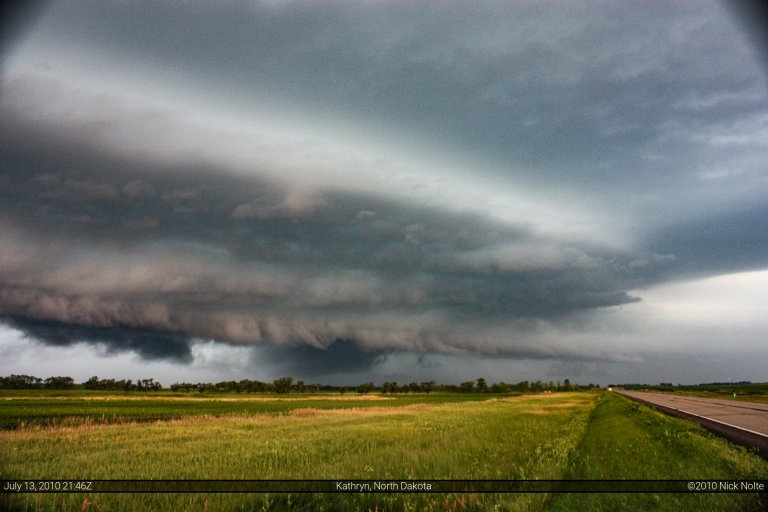 I had taken the 13th and 14th off of work to high tail it up to western Minnesota to see what the weather would have in store for me and while the 14th was supposed to be the bigger outbreak day, the 13th was the better day for me.  Although I bagged no tornadoes on either day, I was treated to quite a long lived supercell that tracked across southern North Dakota and west central Minnesota.

After I left work on the 12th I immediately left town and got to St. Cloud, MN at about 4 in the morning.  Got a few hours of sleep then headed towards my target location at about 10:30 in the morning.  That target was just a bit north of the point where North Dakota, South Dakota and Minnesota meet, and on this particular day that was Wahpeton, MN.  As I approached my target, I decided that the action was shifting westward and decided to poke into North Dakota.   In retrospect, I should have gone north and taken I-94 so my cell service would be good, but I soon found myself in the AT&T deadzone that is North Dakota.  Trekking westward, without data and no idea what was going on I thought about heading south towards South Dakota where I knew I could get service, as I had on May 22nd.   Just west of Ludden I turned south on highway 1 and just shy of the state line saw Andy Gabrielson sitting alongside the road.  I pulled up to see if he had data.  A cell had fired west of Gackle, ND.  After discussing it’s prospects, I headed up towards Jamestown to check it out.

I caught up to the storm south of Jamestown where it was very, very high precip.  I first intercepted the storm on US 281 east of Gackle and south of Jamestown at 3:41pm CDT.  It was tornado warned at this time, and I tried to parallel the storm on ND-46.  The first photo below is on ND-46 south of Valley City, the second and third are from near Enderlin.  It was at this point the storm started to get more organized and look very nice. 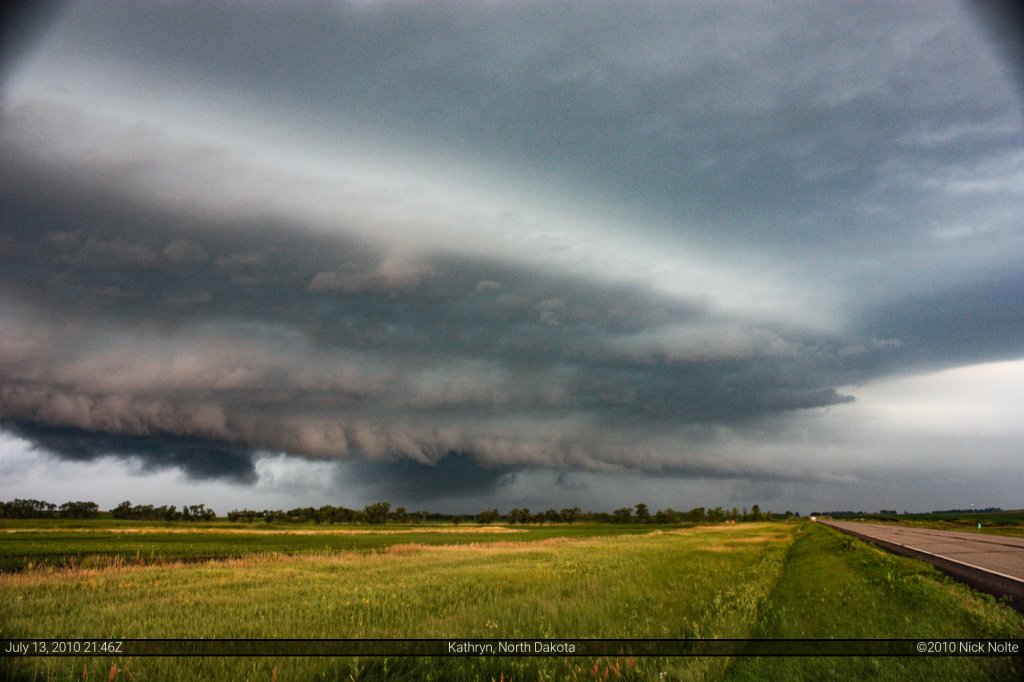 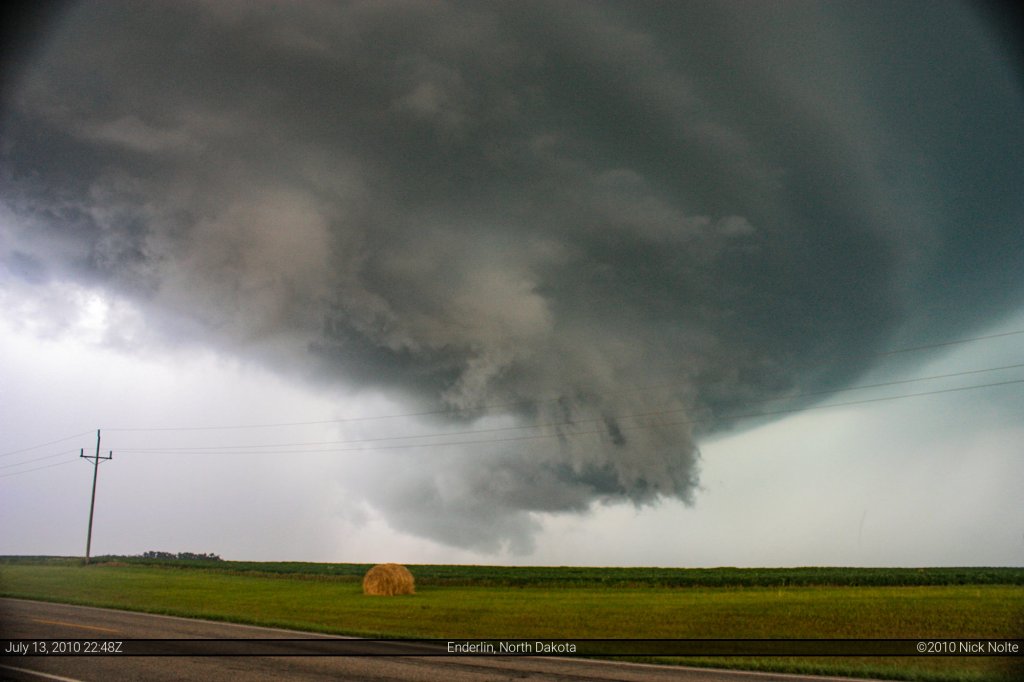 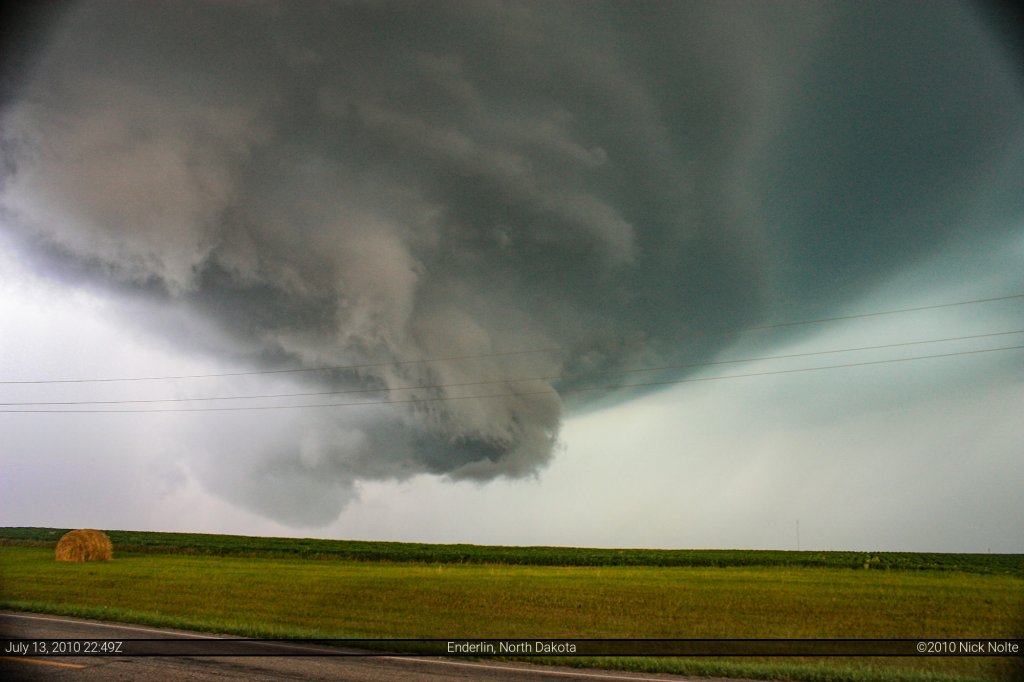 The structure of the storm started to become extremely evident a few miles east of Enderlin, still tornado warned, the storm continued chugging to the east north east.  The time was now 5:54, and I’d been following the storm for 2 hours 13 minutes.

South of Leonard, the storm was still tornado warned, and while there was good motion around the storm, there was never any indication it was going to drop a tornado, not even the slightest hint of of a funnel cloud.

Here is a panorama of the storm south of Leonard at 6:32pm.

I continued to follow the storm, and shot another panorama!  This was from County Rd 186 just east of US 75 north of Wolverton, taken at 7:34pm.  I had now been on the storm 3 hours and 53 minutes.

Eventually the precip area got blown a bit downstream and the base cleared out beneath the storm, since it wasn’t showing any signs of dropping a tornado, I decided to venture closer to the updraft area where I got to see some pretty cool upward motion, some swirling clouds overhead, but nothing too crazy.  As I continued east I ran into Skip Talbot and some other chaser who films for TVN who called me “Ben.”  As it started to get dark, I pulled off the road to see if there would be a decent lightning show, but there wasn’t.  I eventually gave up on the storm near Pelican Rapids, MN as darkness fell at 9:23pm, 5 hours 42 minutes after initial contact, and headed back to Saint Cloud to prepare for the next day.