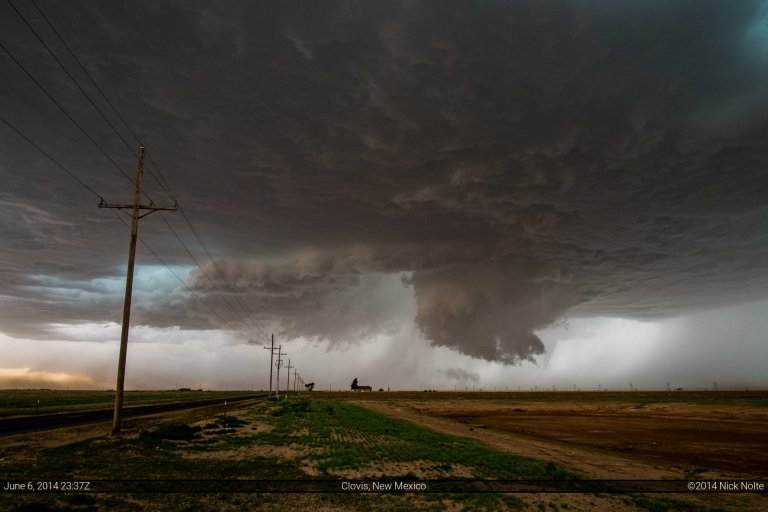 A series of embedded shortwave troughs were expected to migrate across the High Plains in otherwise zonal flow of 40 to 50 knots. Southeasterly surface flow was expected throughout the front range in Colorado and New Mexico while low 60s dewpoints were drawn into the area. With several hours of insolation, this would provide substantial instability for storms to initiate in this area. END_OF_DOCUMENT_TOKEN_TO_BE_REPLACED

June 4th was a sort of down day on the chase vacation. There was a slight chance for severe weather across the Nebraska Panhandle, Western Kansas and into Eastern Colorado, but probabilities were pretty low. A slight 35-40kt westerly flow at 500mb with CAPE values approaching 2,000 J/Kg provided decent dynamics and instability, but the cap was forecast to be moderate which might prevent any robust convection from taking off. END_OF_DOCUMENT_TOKEN_TO_BE_REPLACED

After an uneventful day on the 2nd, Williamson and myself found ourselves awaking in Grand Island, Nebraska to a promising outlook for severe weather. The stage was set for unsettled weather across Nebraska characterized by an unstable atmosphere and a favorably placed warm front. A low pressure migrating along a warm front from Wyoming to Nebraska would be the focal point for severe weather. A southerly low level jet of 40 to 50 knots was expected to overspread the target area while surface temperatures reached the upper 80s, dewpoints into the upper 60s which would promote a heavily buoyant atmosphere marked by surface based CAPE values exceeding 4,000 J/Kg. Hodographs also indicated a strongly veered wind profile throughout the atmosphere and bulk shear values of 60 to 70 knots. END_OF_DOCUMENT_TOKEN_TO_BE_REPLACED

The first day of June featured a shortwave trough sitting over the intermountain west which was forecast to rotate across the the Plains and into the Missouri Valley during the day. A surface low was expected to develop over northeastern Colorado and traverse towards the Upper Midwest through the day. A secondary low was forecast to deepen over western Kansas with attendant dryline extending into Texas. Dewpoints in the mid 60s were expected to abut the dryline as it surged east pushing CAPE values into the 2000s while a low level jet in the 30-40kt range would be intersecting the target area. END_OF_DOCUMENT_TOKEN_TO_BE_REPLACED

May 31st was the second day of a 9 day mini-chasecation. The first couple of days featured a small shortwave trough traversing the northern part of the High Plains and Black Hills which provided slight chance opportunities at severe weather around the Montana, South Dakota and Wyoming areas. An area of low pressure was forecast to strengthen over north central Wyoming with a diffuse front stretching east into South Dakota and a trough extending from the low south into eastern New Mexico. END_OF_DOCUMENT_TOKEN_TO_BE_REPLACED